For years, Assassin’s Creed fans have been hoping that Ubisoft would use the samurai era of Japan as a setting. Ghost of Tsushima is, in a lot of ways, that dream realized, even if it isn’t an actual Assassin’s Creed. And honestly, it’s probably better this way.

Ghost of Tsushima comes out on July 17 for PlayStation 4. It’s the console’s last major exclusive before the holiday launch of PlayStation 5, and it’s a good one to go out on. Tsushima encapsulates a lot of the qualities that have made PS4 exclusives so prestigious: large, beautiful worlds to explore paired with strong, emotional stories.

But it’s also too familiar. Tsushima has few new ideas. As I said, it borrows a lot from the Assassin’s Creed formula. It’s what I like to call a “map game.” It’s the kind of title where you’re often opening the map and traveling from icon to icon, completing quests and side activities until the map says that you’re done or you decide to move on.

While the structure is unexciting, the rest of Tsushima is strong enough to keep it from crumbling. The story and characters are doing a lot of the work. The tale has a nice collection of twists and surprises that don’t feel cheap or unearned. Jin Sakai, the samurai star, is a likable and intriguing hero. Sure, the story covers a lot of the generic samurai tropes, including lots of talk about honor. And while I know that developer Sucker Punch found inspiration in the films of Akira Kurosawa, I can’t pretend to be an expert on those or Japanese culture and history.

I do know that I enjoyed Ghost of Tsushima’s story, even though I’m finding myself less interested in narrative-focused games as I get older. But Tsushima kept my attention even during longer cutscenes and dialogue exchanges, thanks in large part to superb voice acting and a cast of characters that get a chance to emotionally grow throughout the adventure. 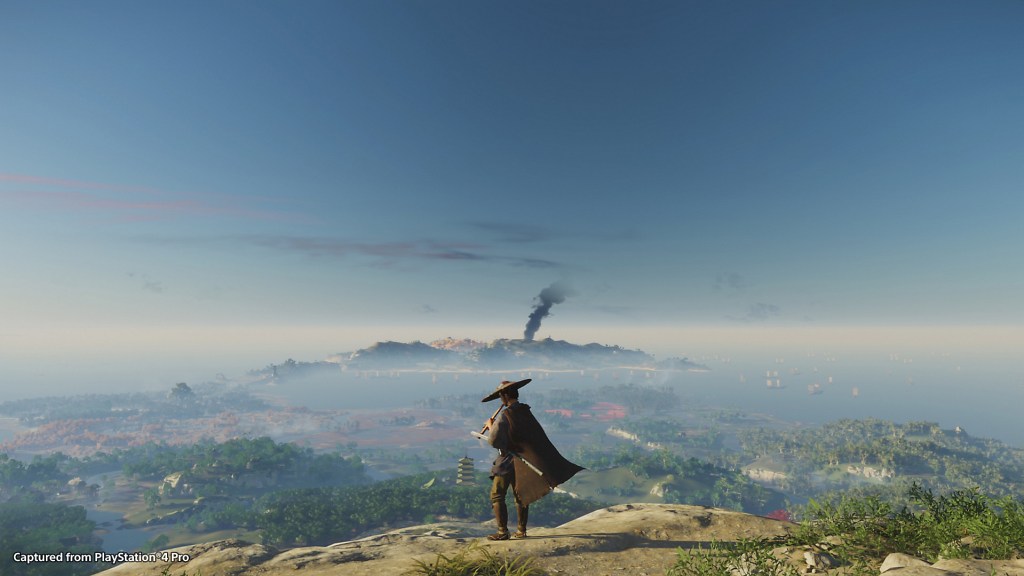 Above: Tsushima is a big and beautiful world to explore.

If story is one pillar holding Tsushima together, combat is the other. As you’d expect, fighting focuses on your katana. And while some of the typical techniques are important to combat, like countering opponent’s blows or dodging them, you also need to switch between four different sword stances to be your most effective. Each stance excels against a specific weapon, like swords, shields, or spears. And since you can switch between these stances at any moment during a fight, combat has this beautiful flow to it. While you’re attacking one enemy, you’re scouting the rest of the forces around you, deciding who you need to deal with next and which sword stance you’ll have to change to.

You also have an assortment of “ghost” weapons that you can use in combat. These include smoke bombs, sticky explosives, and other tools that can distract your enemies. They aren’t the most exciting abilities, but they are effective against larger crowds. You also have a bow. It’s a bow. It works just like they always do in these kinds of games. It’s effective at killing enemies from a range, but it’s a bit boring.

Ghost of Tsushima excels at story and combat. Stealth, meanwhile, is fine. If you’ve played just about any modern triple-A game from the last decade, you probably know how it works. You crouch to avoid detection from enemies, hiding in cover such as tall grass while you wait for an opportunity to sneak by or assassinate the bad guys.

Thankfully, you don’t have to do too much stealth if you don’t want to. I usually found it more effective (and fun) to just run into enemy camps head-on. The game even encourages you to do this, since you can initiate a standoff at the beginning of a battle, which has you calling out the enemy and engaging in a duel with one of their soldiers, giving you the chance to instantly kill them. But some missions do require stealth, and they can feel a bit more tedious. 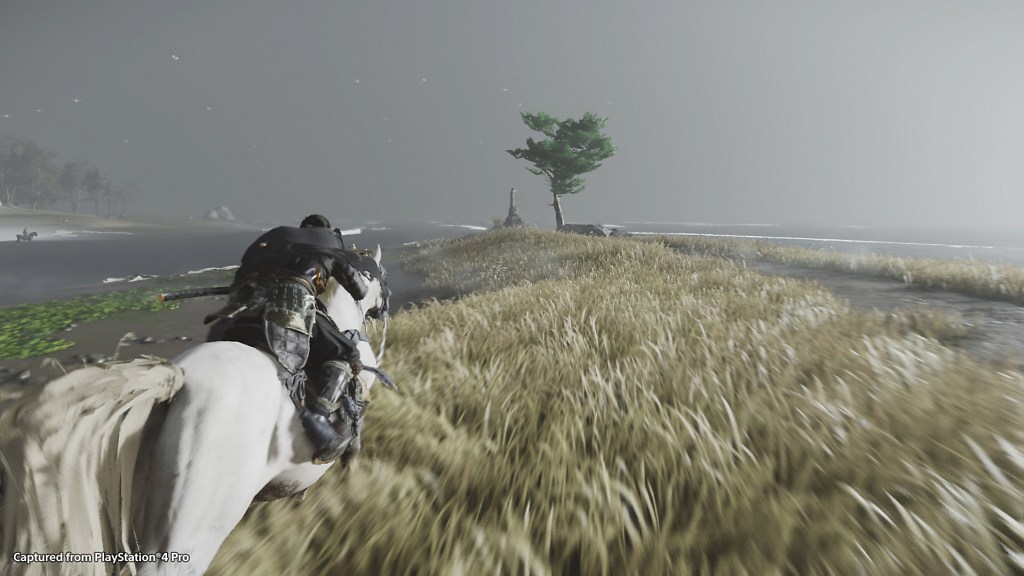 Above: Yeah, there’s probably something there.

And even the combat, as great as it is, can get repetitive. That has more to do with the structure of the game itself. Tsushima is a big and beautiful world, but most of the actual content is the same. You go to a place and kill all the enemies there. Then some people talk to each other, you ride to a place to talk to someone else, then you travel to a new location and kill everyone there too. You won’t find too much variety in the gameplay.

Things can get a bit more interesting when you go exploring. Tsushima hosts lots of hidden goodies, such as fox dens, bamboo stands, and hot springs. Discovering these can give you bonuses such as increased health, so they are worth searching for. But looking for them isn’t so tedious as wandering around aimlessly. As you play, golden birds can appear, flying in front of you and leading you to some unexplored area. Tsushima has a lot of organic tools like this to aid in your exploration.

The need for creed

Ghost of Tsushima isn’t going to do anything that you haven’t seen before, but it uses that modern Assassin’s Creed formula to host a big and emotional samurai saga. I’ll even say that I like it better than, say, Assassin’s Creed: Odyssey, largely due to the stronger story and combat.

It’s not bold enough to be excellent, but Ghost of Tsushima is enjoyable enough to keep fans of these kinds of map games busy and happy for a good while.

Ghost of Tsushima comes out on July 17 for PlayStation 4. Sony gave GamesBeat a code for this review.