Hearthstone‘s next expansion is taking you to school. Scholomance Academy takes inspiration from one of World of Warcraft‘s oldest and most beloved dungeons, the magic academy at Scholomance.

The evil wizard Kel’Thuzad ran Scholomance as a place to train talented mages in necromancy. This was back when he was alive, as Kel’Thuzad became a powerful lich during the events of Warcraft III. By World of Warcraft, Kel’Thuzad was no longer at the school, but plenty of necromancers and their abominations inhabited its halls. And although Kel’Thuzad already played a part in Hearthstone’s first new set after release, the Curse of Naxxramas adventure, he will return in this expansion.

Scholomance Academy will add 135 new cards to the game when it launches in early August, including new dual-class cards. We saw tri-class cards back in the Mean Streets of Gadgetzan expansion back in 2016, and these will work similarly. Some cards will be usable by two classes instead of the usual one. For example, you may find some Beast cards that work for both Druids and Hunters, two classes known for their affinity with nature.

The expansion will introduce the Spellburst keyword. Spellburst is a powerful effect attached to some minions and weapons. They can only activate once, and only after you meet a certain requirement.

You’ll also discover Studies. These are a new kind of Discover card. You still get to pick one of three cards and add them to your hand, but this effect will also give you a mana discount on the next card of that type that you use.

I interviewed Hearthstone senior game designer Liv Breeden and game designer Chadd Nervig about this new expansion and these new mechanics. Here’s a edited transcript of our interview.

GamesBeat: How did the idea to do a set based on the classic Scholomance dungeon come about?

Liv Breeden: It’s super-exciting, because this world — it’s like a dungeon in World of Warcraft that everyone’s gone through. They know the bosses and the Legendaries that might show up. But doing a whole set on necromancy — we wanted to do the Hearthstone twist on it and bring it back to when it was a school of magic, full of life and people going through the halls perfecting their craft. There’s the seeds of necromancy and the Cult of the Damned sprouting in the basement. Kel’Thuzad is still the headmaster. There’s those inklings of evil, but really this is a full-fledged school of magic for all the classes and all types of magic.

Chadd Nervig: It’s much more vibrant and colorful at this point. Lots to do, lots of courses to take, lots of types of magic to explore.

GamesBeat: Kel’Thuzad has been a big presence in Hearthstone in its earlier days. What can we expect from the character in this expansion?

Nervig: Well, he’s alive right now. That’s a pretty big change for him. He’s headmaster at the school, the academy of Scholomance, teaching students, leading the other professors. There’s a professor in each of our dual classes. Kel’Thuzad reigns over them.

GamesBeat: Are there any other well-known characters we can expect to see in this set?

Nervig: Yeah, there’s lots of — like Liv said, if you’ve been through the dungeon in WoW, you may remember characters like [the bone golem] Rattlegore, one of the bosses. He’s here in Scholomance still, basically as you remember him. Meanwhile there are other characters that were bosses in Scholomance, but now they’re alive and they’re one of the professors or something. Those are revealed on day one, but there’s quite a few of them. There’s going to be some familiar faces. 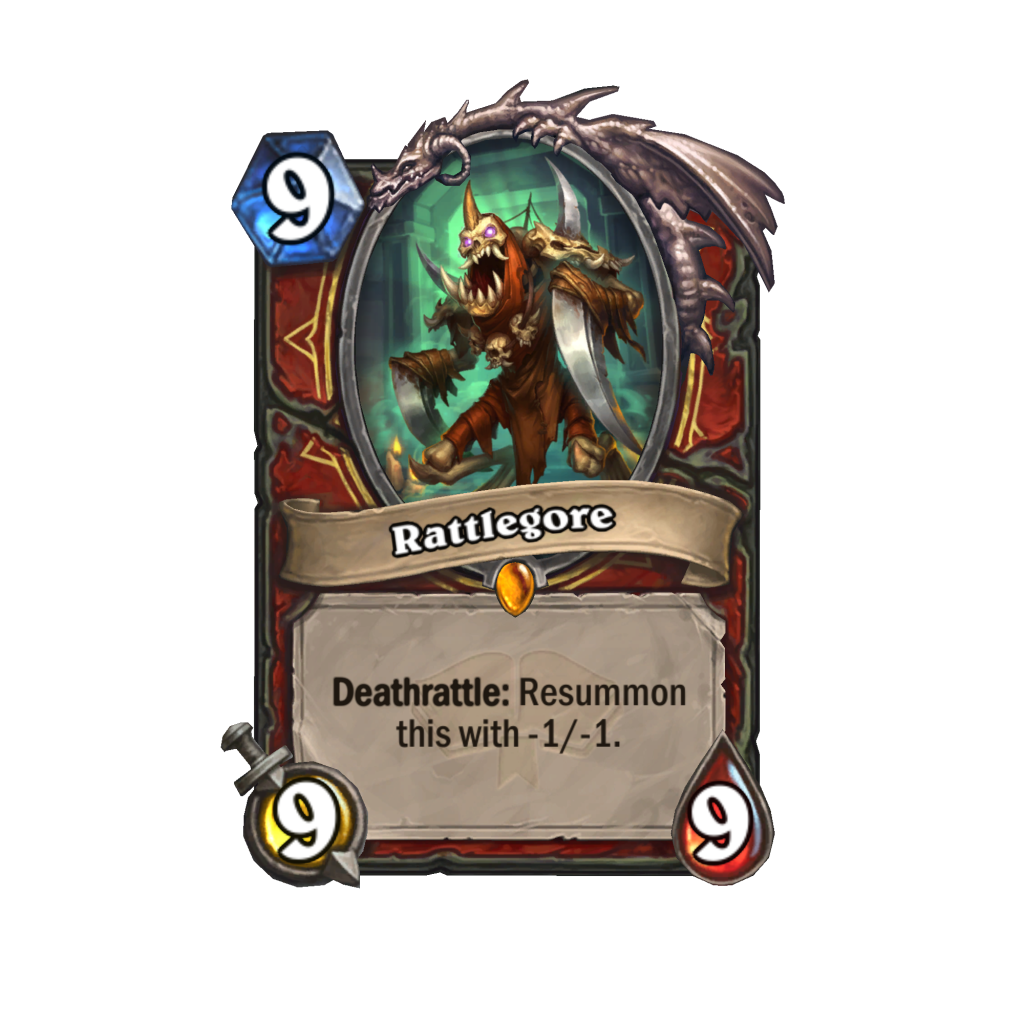 Above: Rattlegore is a bone golem.

Breeden: That’s one of the fun things, seeing these characters who are dead, liches — what were they like alive? What’s that transition like between the living and the dead? While we don’t explore it that specifically, we have the living characters, and you can see what they were like before they turned into these evil undead abominations.

GamesBeat: You already brought up the dual class cards. Are these similar to tri-class cards?

Nervig: It’s a little different. The tri-class cards were — there were these three warring factions, and they all had their own unique identities separate from the classes. It was more like, these classes have to follow these factions. These are different in Scholomance. There’s 10 courses that are — they’re basically the overlap between the different classes. There’s an illusion course where you can learn all sorts of illusion magic. Rogues and Mages both go to the illusion course. They’re like, say, Wand Thief, one of our example cards that we’re announcing tomorrow — it uses both Discover a Mage spell and it’s a Combo card. It’s using mechanics from both classes. We aim to find what’s the overlap there between the classes. Breeden: It’s exciting to do the dual classes this way, because it’s the intersection of what makes them awesome. These aren’t just cool, neutral cards that a bunch of different classes share. It’s really like, what does it mean to be a rogue/mage card? We’ve gone as far as to change the card templates. You see half rogue, half mage. It’s both of those classes combined. It’s not just a neutral card. It really is the intersection of those classes and what makes them cool.

GamesBeat: Is each class only paired up with one other class, or are there multiple different pairings?

Breeden: We have a full circle. Mage is paired with both Rogue and Shaman. You get access to four cards on either side, a Legendary and three other cards. It’s in a full circle. It’s not just Mages and Rogues having similar decks. It’s also the intersection on the other side. Shaman also gets access to Druid cards. Even the Shaman deck that uses the Mage cards feels different, because they have access to Shaman/Druid cards as well.

GamesBeat: It seems like a complicated task to figure out that circle and pairing up the classes to close the circle at both ends. Did that take a lot of work?

Nervig: There was some work involved. A lot of it came naturally, just like — fantasy-wise or mechanics-wise, the overlap between rogues and warriors, it’s weapons. That came naturally. What’s the overlap between Paladins and Priests? It’s holy magic. A lot of it came pretty comfortably. I think we were 90% of the way there really quickly. We swapped around a class or two here or there pretty early. But it flows naturally.

Breeden: It’s cool to not just see where they’re similar, but also kind of where they’re different. Priest and warlock is one of our combinations. That’s one of the most interesting ones, because they both manipulate health, but it’s kind of in two different directions. Priests are all about healing themselves up, warlocks are all about self-damage. But their cards intersect between those two. It’s like, how is necromancy born? It’s this rebirth of priest stuff, but with the combination of warlock magic as well — I don’t want to say abomination again, but it’s like the necromancy school is the priest and warlock overlapping.

GamesBeat: This is the second expansion with Demon Hunter as a class. How is that class evolving in this expansion, and what are some of the lessons you’ve learned since it debuted?

Nervig: Demon Hunter has been absolutely great. We’re super-thrilled with how excited all of our players have been about Demon Hunter, and we’re excited to take it in a different direction now. We didn’t have a whole lot of cards in Demon Hunter to start with, but now we can amp that up with more new cards. In dual classes they’re paired with Hunter and Warlock. The Warlock pairing, they both deal with demons and fell magic and souls. The new mechanics unique to this pairing for Scholomance Academy — with Hunter they get to explore the hunt, tracking things and hunting them down. We get to explore some of the other aspects of Demon Hunters that we didn’t — maybe deck archetypes where the seeds are there on live, but they don’t quite make it, don’t see a lot of play, but now we can amp them up and give them more cards to see how they play now.

GamesBeat: The Spellburst effect or keyword, is that going to be limited to more spell-specific classes, or does everybody get those cards?

Breeden: I think it’s pretty spread out throughout different classes. I’d have to check, but I’m pretty sure some of the martial classes get a Spellburst as well. It’s not exclusive to the spell classes. But what’s exciting about Spellburst in general, this is the first time we’ve done a one-time effect. We can do things like — Diligent Note Taker is one of the cards, which is Spellburst, return this spell to your hand. Now, we couldn’t really print a card that said … just “whenever you cast a spell, return it to your hand,” because then you just Lava Burst somebody until they’re dead, which isn’t super fun. But the one-time effect is interesting, because you can use it with Lava Burst to go face, but maybe you need to clear the board and use a double Lightning Storm, or maybe you want to hold onto the coin for later but want to coin this out, something like that. Spellburst is interesting because it’s not just “did you cast a spell?” Sometimes it’s “which spell did you cast, or when did you cast it?” Goody Two Shields is another great one, where it’s got divine shield, but Spellburst dings divine shield. You don’t want to play it and then combo with Spellburst, because you don’t get any benefit out of it. It’s better to play it, then trade, and then spellburst to get another divine shield and then trade again. 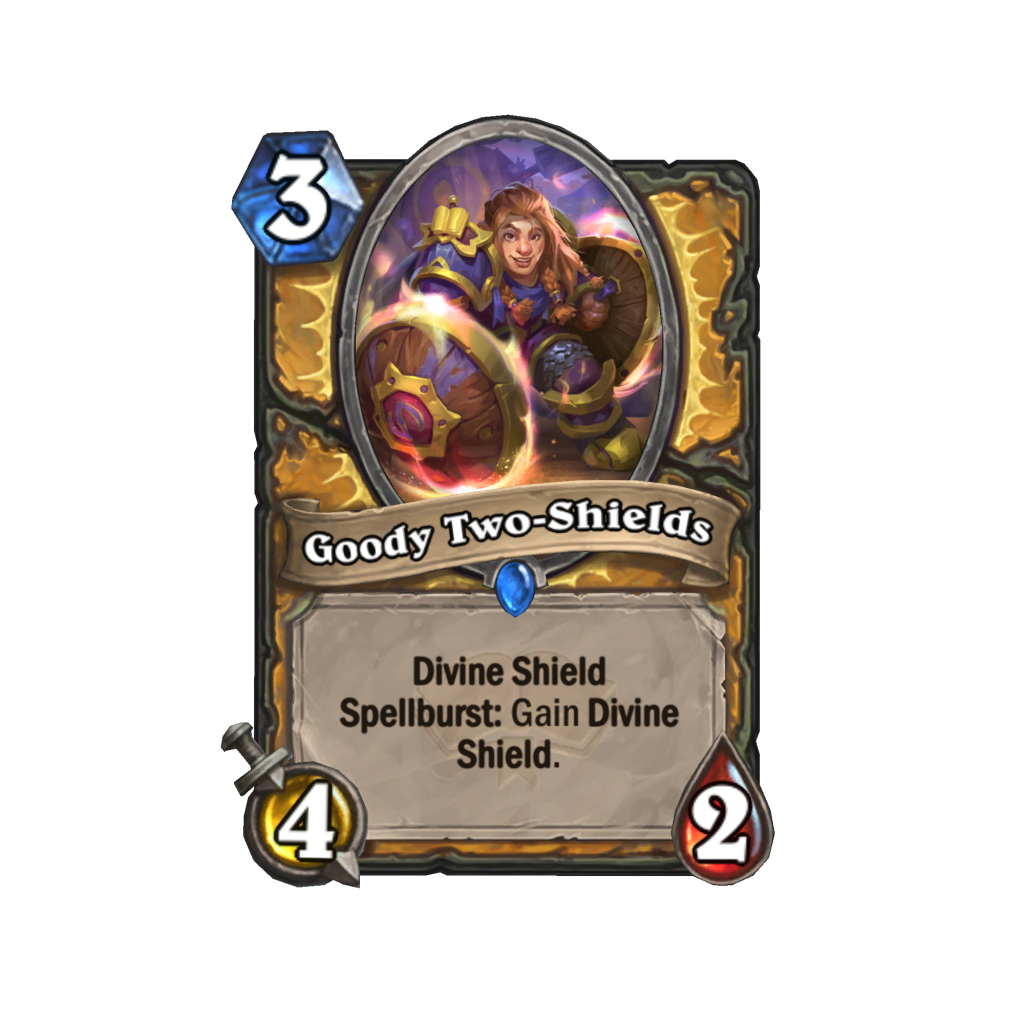 GamesBeat: Do you see Spellburst as being an expansion keyword, or is it something you want to play with in future sets?

GamesBeat: Can you explain how the Studies cards work?

Nervig: Studies are a series of cards. There’s several of them throughout the set in different paired classes or dual class combinations. They’re all 1 mana, Discover a thing. One of them is a spell, with Nature Studies. There’s other types of things. And then the next whatever that thing is costs one less. Nature Studies, discover a spell and your next one costs one less. You get to bank mana, and that can cross turns, too, so you can use that this turn and then not immediately use that mana reduction now. You can save it for the next turn. 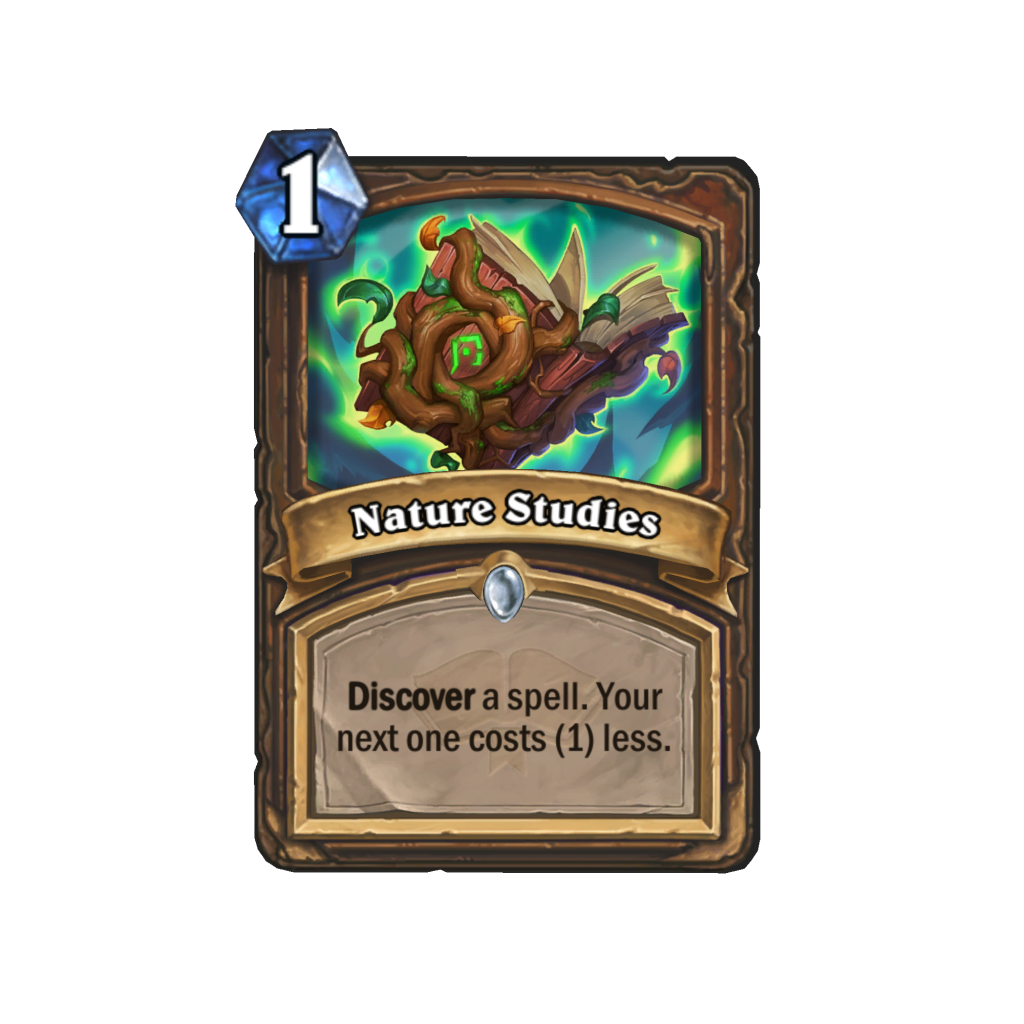 Breeden: The story on that is fun. You go study for a class, and you try to learn something, but maybe you want to spend your learned knowledge on a different thing instead. It’s not just, “hey, discover something and it costs less.” You’ve gained knowledge, so you can spend that knowledge on something else.

Nervig: I also wanted to highlight, when this gets all announced, when we have patch 17.6 coming out, everyone will get two free copies of Transfer Student, a new card from the set, usable early. It’s a 2 mana 2/2 that has a different effect based on what game board you’re playing on. It’s a mechanic we’ve never done before, but we thought it would be really cool for this. If you’re on the Alden board, it has Reborn.

GamesBeat: Is that something you’ll keep up with each set as you add new boards?

Nervig: While it’s in Standard, we’ll keep updating it with new boards. After it rotates to wild, we’ll just have it discover from whatever that set is.