World of Warcraft occupies a unique place in the gaming world. After 15 years, it still dominates massively multiplayer online RPGs in Western gaming, and people keep playing it.

Blizzard Entertainment never launched a World of Warcraft II; it just kept iterating on the original. In recent years, that philosophy has created a WoW world where decade-old game tropes coexist alongside quests with current sensibilities. Modern game systems clash with distinctly lower-fidelity graphics, and the core game UI shows none of the finesse of modern user experience research.

World of Warcraft: Shadowlands is a shot at redemption

Shadowlands may do more to fix that dichotomy than most of the previous seven expansions.

The revamped leveling experience features a new starting zone and progression through 60 levels instead of 120-130. Designers had the first real chance to quietly tweak and update quests and leveling since the 2010 Cataclysm expansion literally broke parts of the game world. For new players, the experience will skip huge, poorly aging chunks of the franchise’s history altogether.

“We can have a finely paced, crafted experience that really reflects the best of what WoW has to offer in 2020, that reflects the modern game. So a new player isn’t playing 2010 content, and then graduating to 2012 content or 2014 content,” Hazzikostas said.

Blizzard made a few modest tweaks to the game’s UI for Shadowlands, including new character design screens and updated button looks and behavior. But the look doesn’t stray far from the classic appearance players have grown familiar with. Shadowlands’ new afterlife setting means that artists can take brand-new directions in how they craft areas. Their designs harken back to familiar elements, but also create brand-new ones.

“Yes, there is content in the game that is 15 years old, and we just revisited that in WoW Classic last year,” Hazzikostas said. “But each new expansion marks an evolution in our storytelling and our engine, our visual fidelity and just our general design that draws upon the lessons learned along the way.

“So Shadowlands is a 2020 game. It is a modern MMO in a lot of ways, built upon the foundations of this storied franchise.” 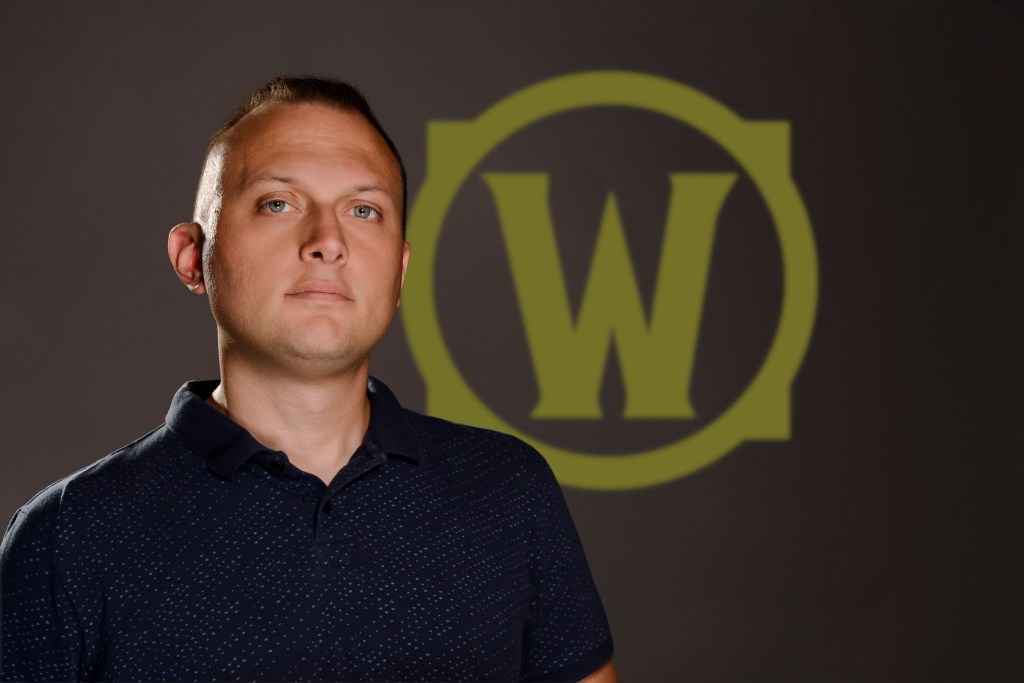 Making up for decades of old code

Sometimes those foundations feel like shackles instead of a peak to stand on, he admitted. Hazzikostas has been working on the game since 2008, when he joined as a game designer, and became director in 2016.

“Of course there is tech debt. That’s a double edged sword, where we are in some areas beholden to decisions made 10, 15 years ago by people who couldn’t imagine the situation we find ourselves in now, or the ways in which we want to apply that technology to new systems,” he said. “But that’s why every expansion, we’re constantly going back and refreshing and updating some of our old infrastructure.”

One example Warcraft: Shadowlands brings is the new character customization system. A flood of new options will greet players, thanks to updates in the way new customizations can be designed. Those features also retroactively bring a welcome swath of personality and color to the game’s legion of lookalike NPCs.

“I think the character customization project is one of my favorite new features in Shadowlands,” Hazzikostas said. “It’s as much an achievement and a product of the artwork that has gone into it by our character artists, as it is [by] our engineers.”

“There are those sorts of examples, where we realized that we’re running into the limits of old tech choices that we made in the past. We can redo it,” he said. “We can break those limits and clear the way forward for further advancements.” 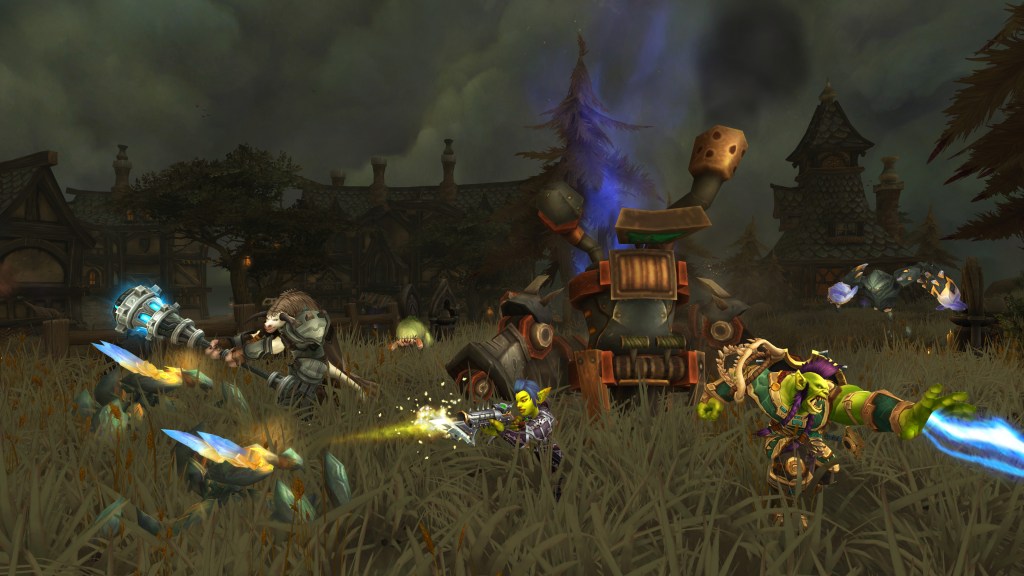 Above: Players battle on the Warcraft Havenswood Island.

Balancing new tech with a familiar look and feel

Hazzikostas said that one saving grace has been WoW’s painterly, brightly colored art style. Because the game never aspired to be photorealistic, it’s held up better versus its competitors than it might have otherwise. As a bonus, players can still use basic PCs.

Shadowlands will take advantage of newer graphics tech. Engineers added support for ray-tracing and ultrawide resolutions. But many workplace-style PC potatoes will still play the next expansion as well.

The team tried and rejected some other advanced technology for Shadowlands. When designing the new endless Torghast dungeon, Hazzikostas sat with the Diablo hack-‘n’-slash adventure team to explore new ways to build infinite content. Should they use procedurally generated maps? Artificial intelligence?

“The closest to AI that we’ve ever really had is the enemy teams in [Island] Expeditions. They do have a true kind of AI instead of priorities that drive them,” he said. “You also see those when you’re fighting those agents in battlegrounds, when we have that [Arathi Basin Comp Stomp] brawl going on. What we’ve learned from Island Expeditions and the way we really built Torghast from the ground up, it’s more modular than procedural. It’s building content in a way that allows for the interconnection and combination of lots of different handcrafted possibilities.”

Areas and features and monsters that generate on the fly risk feeling chaotic in a game focused on bespoke experiences and interactions, he said.

“To be clear, I love Diablo, but that exact approach didn’t feel like the right fit for World of Warcraft,” he said. “At its core, we wanted to create spaces and targets that, if you squinted your eyes a little bit, felt like they could have been a purely handcrafted WoW dungeon. Maybe at some point we will all be out of a job and we’ll have AI that can do this for us, but in the interim we have found much better success and results when it’s mostly a handcrafted process.” 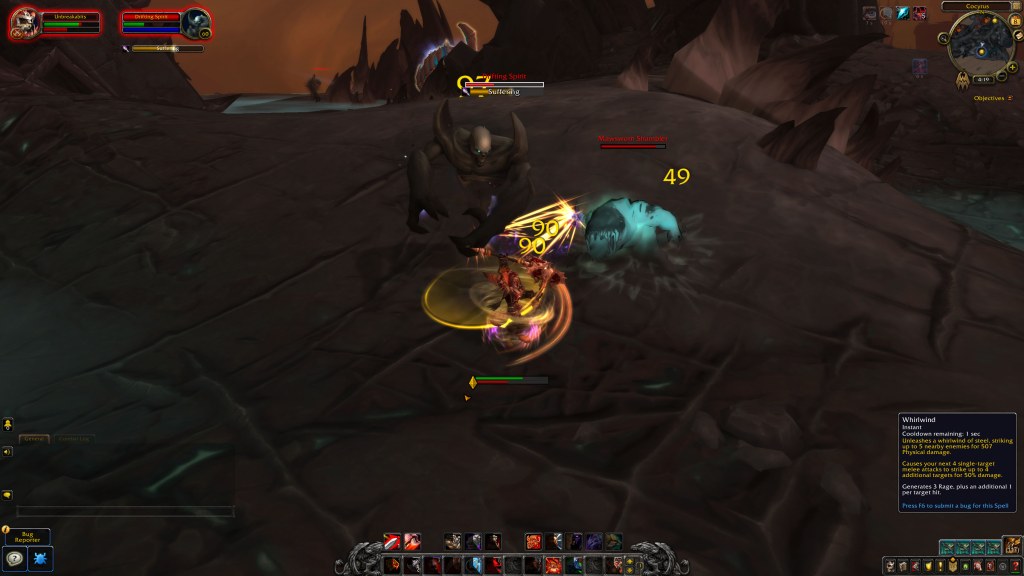 Above: Whirlwind becomes a baseline ability for all warriors in Shadowlands.

Picking from 15 years of player abilities

New and old struggle with each other in Shadowlands’ player abilities as well. One of the design decisions Warcraft’s developers made was to “unprune” classes’ spells and abilities, giving back iconic spells that had been removed over time. That increased the number of options for buttons players can press.

On the one hand, the “unpruning” returned fun flavor spells and some in-game visuals I haven’t seen in game in some time. (Hunters’ marks are popping up on targets everywhere!) On the other, the changes make some classes with already-overflowing action bars stretch beyond their limits. The choices for what abilities to use and keep can make gameplay complicated.

“There are certainly some abilities that are there for flavor. We don’t expect them to be used regularly,” Hazzikostas said. “A Shaman is probably not going to worry about [key] binding Far Sight and where exactly it should go on their bar. But it’s a cool flavorful thing. The game isn’t any worse if someone goes a whole year never casting that ability, and they forget that it’s in their spell book. There’ll be some people that really love it.”

‘What do you want us to take back out?’

The team started by listening to what players said they wanted back, he said. Moving into Shadowlands, they’ll be asking, what do you wish was gone? Typically, Blizzard monitors for player feedback to tell them when they’ve removed something people loved, not when they’ve added in too many things.

“Unlike in past expansions, where we began the discussion asking people what abilities they missed most because we had just taken a bunch of stuff away from you. This time we’re asking, is there anything here that you really feel is gratuitous?” Hazzikostas said. He frequently plays a Shaman, and he gave an example from that class.

“We put back Searing Totem, and [we] got a bunch of feedback. ‘I didn’t miss this one. This is like a super-maintenance-y button. It’s not very exciting to push, but I feel like I have to push it regularly. Please, no.’ We re-pruned it. It could be that yes, the buttons that you got back were exciting, but there’s a couple of others that now just feel entirely unnecessary.”

Like the game itself, in Shadowlands class ability changes will continue to evolve, Hazzikostas said.

“That’s part of the ongoing iterative process. The book’s closed on that yet.”