Autonomous car startup Aurora today announced it will begin testing driverless vehicles, including semi trucks, in parts of Texas. Over the next few weeks in the Dallas-Fort Worth Area, the company plans to roll out a fleet of Hyundai Pacificas integrated with its custom-designed FirstLight Lidar, with class 8 trucks to follow by the end of the year. Commercial routes “that sit at the center of key logistics delivery corridors” will be the principal focus.

As the pandemic drives unprecedented growth in the logistics and ground transportation market, TuSimple, Waymo, and other rivals are also investing increased resources in fully autonomous solutions. The industry stands to save the logistics and shipping industry $70 billion annually while boosting productivity by 30%. Besides cost savings, the growth is driven in part by a shortage of human drivers. In 2018, the American Trucking Associates estimated that 50,000 more truckers were needed to close the gap in the U.S., despite the sidelining of proposed U.S. Transportation Department screenings for sleep apnea. 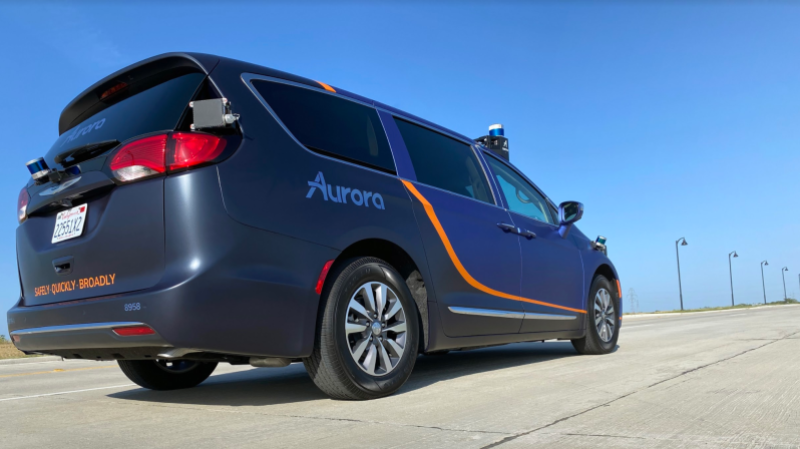 “Texas’ role as a crucial state in the movement of goods makes it a natural place for Aurora’s expanded testing. With more public road miles than any other state, Texas understands that self-driving technology will have a critical safety impact for those who drive on its roads,” Aurora wrote in a blog post. “Because of its open regulatory environment and pro-business policies, it is an ideal place to work with our government partners and bring innovative technologies that will decrease road fatalities and make our roads safer.”

In January, Aurora said that after a year of focusing on capabilities including merging, nudging, and unprotected left-hand turns, its autonomous system — the Aurora Driver, which has been integrated into six different types of vehicles to date, including sedans, SUVs, minivans, commercial vans, and freight trucks — can perform each seamlessly, “even in dense urban environments.” In 2020, as the company expands its vehicle fleets for data collection, testing, and validation, Aurora plans to improve how the Driver predicts and accounts for “non-compliant actors,” or people who aren’t following the rules of the road, like jaywalkers and drivers who aggressively cut into the lane.

Like most of its competitors, Aurora found its vehicle fleet grounded for months by shelter-in-place orders and mandatory business closures. It has since resumed pilots in Pittsburgh with a small number of cars and employees as well as in Santa Clara and Alameda County, California after implementing safety precautions including masks for employees, enhanced cleaning, symptom checks, and increased signage about health precautions. Vehicle safety operators are now assigned permanent partners, in addition, to minimize the risk of spread.

“We put the safety of our employees and communities where we operate first,” a spokesperson told VentureBeat via email. “We follow all safety protocols, including requiring masks in vehicles and social distancing where possible, and will continue to do so in all communities where we are.” Last year, Aurora raised investments from Amazon and others totaling $600 million at a valuation of over $2 billion. The company has doubled its workforce to 500 people (up from 250 as of May 2019) and recently committed to hiring workers with a specific focus on mid- to senior-level engineers in software and infrastructure, robotics, hardware, cloud, and firmware.

The economic fallout from the pandemic has begun to take its toll, with even well-funded ventures like Cruise, Kodiak Robotics, and Ike shedding hundreds of employees collectively. (Zoox, which also laid off employees, was acquired by Amazon in June for $1.2 billion.) Analysts predict the pandemic and its effects, like testing delays, will result in consolidation, tabled or canceled launches, and shakeups across the autonomous transportation industry. In April, Ford pushed the unveiling of its self-driving service from 2021 to 2022, and in May, Waymo CEO John Krafcik told the New York Times the pandemic delayed work by at least two months.