Sega’s Creative Assembly studio showed me another deep gameplay demo of Total War Saga: Troy, the latest installment in a 20-year-old real-time strategy franchise that has sold more than 20 million copies. The campaign for the single-player game looks far different from what you’d expect based on the usual stories about Troy.

Over the course of about four hours, I played a few dozen turns of one of the main Greek army campaigns, led by Menelaus, the Spartan king whom Helen left to give her love to Paris of Troy, thereby sparking the mythical Trojan War. I also played some rounds of the campaign as Paris, one of eight different commanders that you can play in the PC game that debuts August 13 in the Epic Games Store.

In Total War turn-based strategy games, you can feel like you’re the general of an army on a battlefield, as well as the commander-in-chief of a regional war. When two armies meet on the field, a real-time battle ensues, where you can zoom out to see the big battle or zoom in to see a single company of soldiers battling the enemy.

No pressure here. But I’ve been looking forward to this game because it combines my love for literature (I read The Iliad back in junior high school) and military simulation (I’ve played the Total War strategy games since the first one came out in 2000).

This game is from the Saga subseries, which has a more limited scope and time frame than other Total Wars, with fewer innovations. The Sagas take the innovations of bigger games, such as Total War: Three Kingdoms, the 2019 game that introduced mythical gameplay combined with historical gameplay, as well as single combat between faction leaders. That game was set in ancient China.

But Troy’s scope is pretty big, encompassing all of the societies bordering the Aegean Sea, from Greece to modern-day Turkey. There are more than 200 different towns and cities on the game map. You can expect to play a campaign game for hundreds of turns, or multiple days of gameplay. 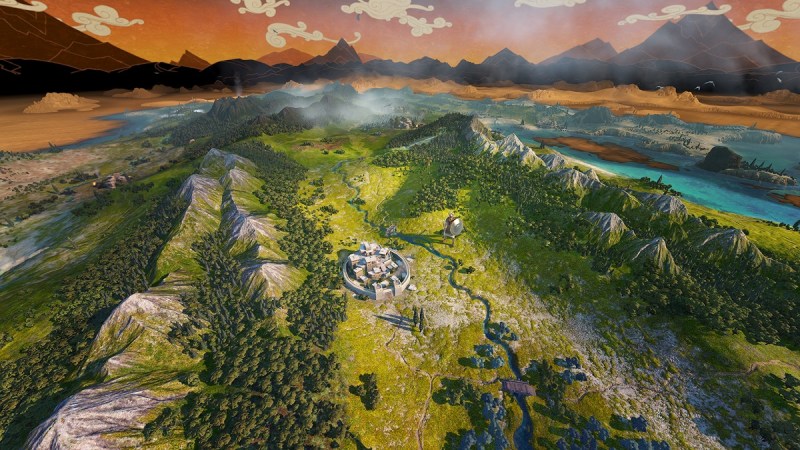 Above: Menelaus leads one of the campaigns in Total War Saga: Troy

Your adviser in the campaign for Total War Saga: Troy is none other than Homer himself. In Homer’s epic poem The Iliad, the mythical Trojan War began after Troy’s Paris made off with Helen, the wife of Menelaus. The pride-hurt king appealed to his brother, Agamemnon (the ruler of Mycenae), and they recruited their allies throughout Greece to bring Helen back. Agamemnon was more than happy to invade the territory of the Dardanelles Strait.

Paris fled to Troy and sought the protection of his father, King Priam, and brother, Hector. Together, the Trojan army and its allies fought off the invading army of Greece for a decade, with the wider conflict lasting 20 years. Agamemnon’s force includes more than 1,000 ships of soldiers with spears, swords, and bows. Hence, Helen is said to be the “face that launched a thousand ships.”

Homer’s The Iliad focused on the ninth year of that 10-year war with the Trojans, during an episode when Achilles, the great Myrmidon hero, had a fight with Agamemnon and the dispute led to tragic consequences. While that is fine material for an epic poem, it’s not big enough for the scope of a Total War game, even a Saga. So rather than focus on just that episode, Total War Saga: Troy focuses on a conflict between the regions that may have gone on for decades, said Maya Georgieva, Troy’s game director at The Creative Assembly, in an interview with GamesBeat.

“Our approach, what we called ‘behind the myth,’ is our intention to visit the historical period that inspired the legends,” Georgieva said. “It’s not just retelling the legends that everybody already knows. Those are definitely not accurate. The way we’re approaching the subject, those legends and myths hold a kernel of truth that inspired them, and that kernel is there for us to try to understand.”

She added, “Historians don’t think that there was just one Trojan War. They’re more of the opinion that it’s probably an account of a bigger conflict, maybe spanning many years. Even the Iliad presents this as a conflict of 10 or 20 years. Just the siege of Troy supposedly took that long. So this isn’t just one war. The Greek expeditions would go across the sea, sack cities, and stay there for a very long time. It’s more like a period of 20 or 30 years of turmoil, which perhaps culminated in taking the greatest city, but it’s not just a single war. It’s a whole generation of hostilities.” 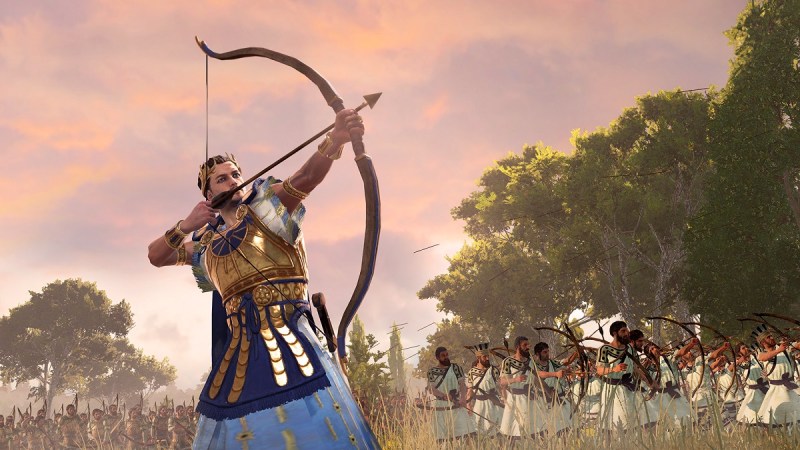 Above: Paris the archer is one of the sons of Troy’s King Priam.

That gives us context for the campaigns. I played as Menelaus. He has gotten on in his years and isn’t a great warrior anymore, but he can inspire men into battle.

But he can’t just build a fleet and land an army on Troy. That would be too short a game, with battles on the plains or at the walls that are too repetitive.

Rather, Menelaus has to unite the Greeks. As you may remember, the Greeks don’t really get along, and nobody likes the Spartans. But Menelaus has some special powers. He can instantly colonize a distant town simply by using resources at hand to buy it out. These are food, stone, gold, wood, and bronze. I quickly spent my resources colonizing three different factions. But that meant I ran out of resources. I also created a second army to fight on a couple of fronts, as I had a wide territory to defend.

This didn’t work out so well. I easily beat an army of rebels and took the town of Etis. Then I had to start repairing the town and growing all of my different towns into an empire. But that was slow. I needed to take more cities through war. I found a military ally in Nestor to the west of Sparta, protecting my flank. But then Nestor went on to conquer one of the islands that I needed to get to Crete, which was the stepping stone to Troy. I tried probing north into the city of Argos, but they were too powerful.

And once I raised my second army, I started running a deficit. I wasn’t producing enough food to feed my troops. I tried fighting some battles, but even with losses I still had too many soldiers. And that was making my citizens restless, as now there wasn’t enough food for them. I negotiated some desperate food deals with neighbors, but I didn’t get much food that way.

And so I never made it to Troy, and my first campaign as Menelaus turned out to be a practice run.

“As Menelaus, you’d be required to raze Troy, capture Helen, destroy Paris, and also a couple of other objectives within those 100 turns or thereabouts,” Georgieva said.

In the second, I was faring better but I ran out of time. I immediately started trying to raise more food to build a second army. But that meant I had to make alliances where I prioritized food. I had a lot of wood, so I set up trade deals with other factions. But that meant I could not honorably attack those other factions and take them over. If I did, their neighbors would become distrustful of me and refuse to make alliances with me. I barely did any fighting because I was so obsessed with trying to colonize other factions or winning them over as military allies through economics and politics.

I had to deal with multiple revolts on the Greek mainland before I could go island hopping toward Crete and then Troy. Oh, Menelaus, what have you gotten yourself into? As Georgieva hinted, it’s going to be a long way to Troy. 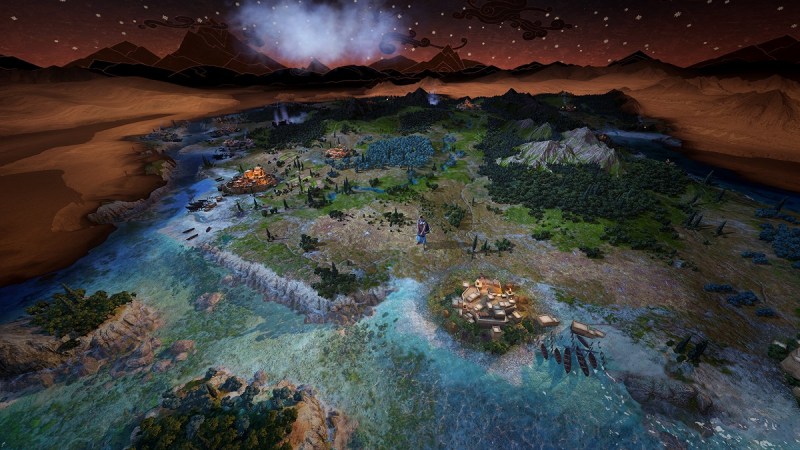 Above: Paris has to outdo Hector to be Priam’s favorite in Total War Saga: Troy.

On the other side, Paris has to do the same thing. He allied with his brother Hector, the lead prince under Troy’s King Priam. But while Paris and Hector are brothers, this story has them as vying to be the crown prince. Priam will only pick one or the other, and so the object of Paris’ campaign is to be named the crown prince over Hector. Troy also has the allegiance of Aeneas, the character who went on to found Rome after the fall of Troy. But that’s another story.

Paris has to defeat a rebellion quickly and then build up his forces, make alliances, and create a giant army. I tried to begin this campaign, attacking the rebels first. This is where the fighting zooms down onto the battlefield. In Total War games, you can use this zoom to change your viewpoint, closing in to see the faces of individual soldiers if you want. The details can be amazing, as long as you don’t look too closely. I saw the same faces on a number of soldiers in each company.

In these games, your spearmen do well against swordsmen or archers, but they aren’t as mobile. Horse soldiers or chariots can wreak havoc among the archers, but the archers can whittle away a force of swordsmen from a distance. It’s like rock-paper-scissors, with ax soldiers also thrown in the mix.

The rebels were on a hill and they outnumbered my forces, to my surprise. I sent my forces up to the top of a nearby hill, trying to go around them and ambush them via some thick ground cover. But they discovered my forces as I was trying to wrap around them in a “C” formation. They attacked and beat my forces back. My soldiers rallied as Paris took on their commander. Eventually, they fled.

I won the battle, but only barely. That left my army tattered. I tried to move across the straits to take another town, but it was way too well defended. I moved further south, but the army of the first town attacked me and I had to flee. They returned to their town. Then I went to besiege the second town. Then I found that it had a larger army than I did. I had to flee. They attacked and I could no longer retreat. And I lost that battle. It appears that Paris has a really weak faction, and he’ll need a lot of luck to win the campaign.

Clearly, just getting to fight the Trojan War, between the Greeks and the Trojans, is a giant campaign in itself, full of prelude wars on both sides. I guess I like that, but it feels like it’s going to be a long march to total victory. 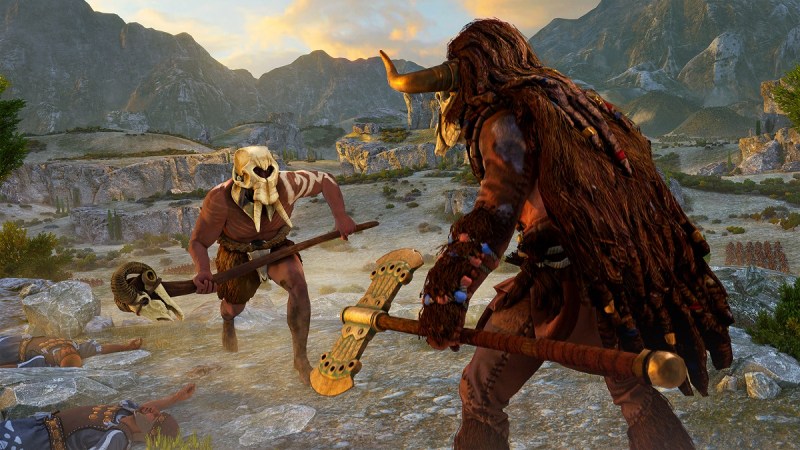 Above: The Cyclops battles the Minotaur in Total War Saga: Troy.

I’m looking forward to this game, but I had my sights set on the end game, and I figured out during this gameplay session that you absolutely have to focus on a fine-tuned strategy before you ever get to pit the Greeks against the Trojans. In other words, this game takes practice, and strategy fans should like that.