Hearthstone’s next expansion, Scholomance Academy, will launch on August 6 and introduce 135 new cards to Blizzard Entertainment’s hit digital card game. GamesBeat has one of those cards to reveal to the world — Boneweb Egg.

Boneweb Egg is a new minion for the Warlock class. It’s a 2 mana 0/2 card that has a strong Deathrattle effect. When this minion dies, it spawns two 2/1 spiders. But that’s not the only way to get those tokens on your board. If you discard Boneweb Egg, you also spawn those spiders.

Blizzard has tinkered around with discard mechanics for Warlock since the game launched in 2014. At first, discarding cards was just a detrimental side effect of powerful cards like Soulfire. The 2016 set One Night in Karazhan introduced cards that you actually would want to discard. This included Silverware Golem, a 3/3 minion that would summon itself onto the board if you discarded it.

Boneweb Egg is similar to Silverware Golem in that it’s a card that gets you value whether you play it normally or you discard it. 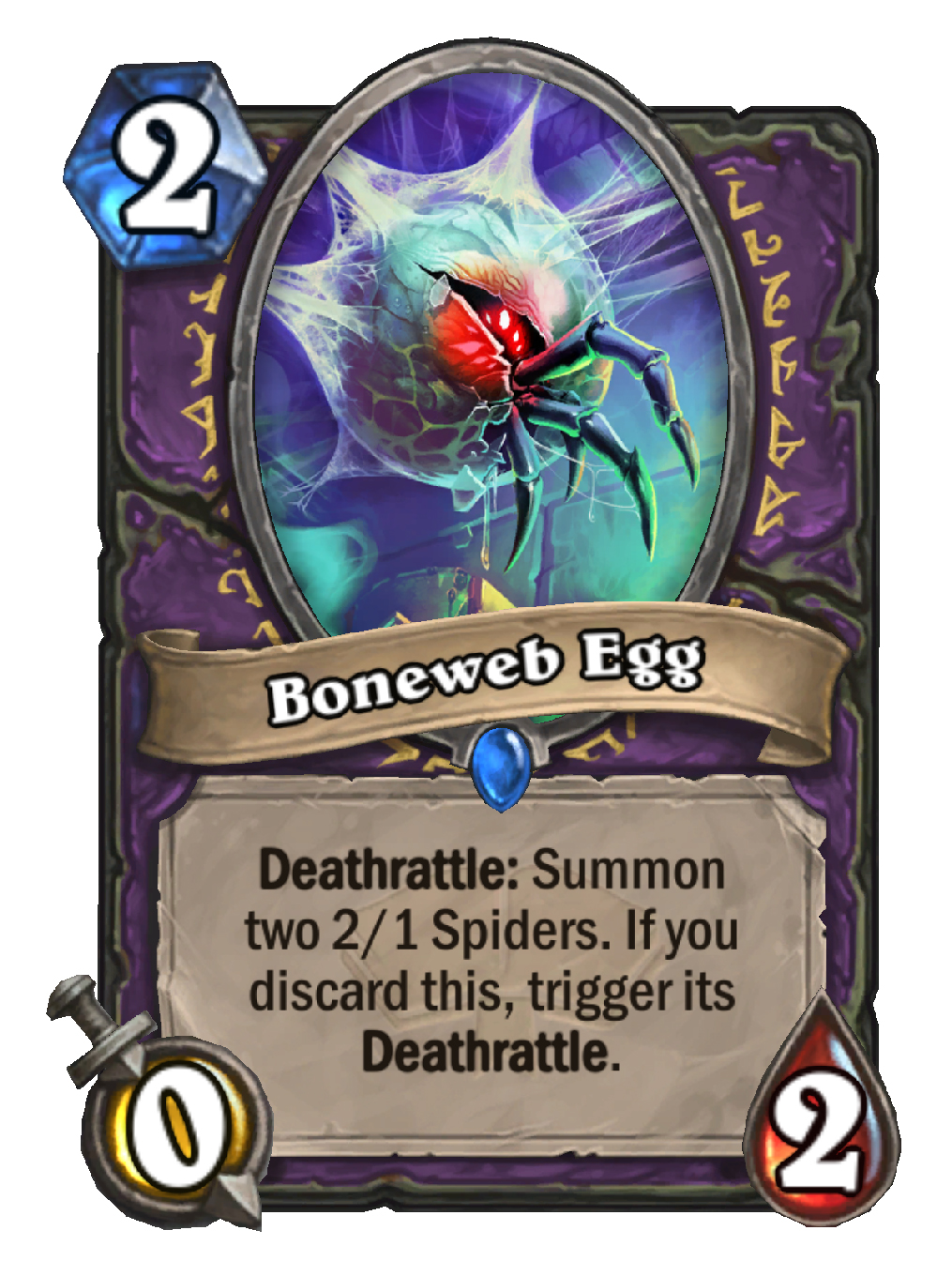 “It’s a great target to discard, if you’re lucky enough, but still good enough to play as a 2-drop,” Alec Dawson, a Blizzard game designer and set design lead for Scholomance Academy, told GamesBeat. He also notes that it works well with Soulfire, the spell I brought up earlier, since that card could discard Boneweb Egg and give you those spiders. Dawson also mentioned EVIL Genius as a minion with strong synergy with the new card. EVIL Genius destroys a friendly minion and gives you two Lackeys (cheap 1 mana minions with strong Battlecry effects). Boneweb Egg is a card you want to destroy, anyway.

That’s because Boneweb Egg is also, well, an egg. This is a kind of minion in Hearthstone that has no attack power, but it spawns other minions when it dies. These cards have proven powerful, since so many other minions and spells can buff eggs to give them attack. Or you can use a card like EVIL Genius to just destroy one immediately.

You can see what Boneweb Egg looks like in action in the video below.

Scholomance Academy takes its theme from one of World of Warcraft’s most popular dungeons. Scholomance was a magic school with a dark secret: Necromancy in the crypts below. That’s where the Boneweb Eggs come from.

While you wouldn’t want to trip over one of these eggs if you’re stuck in the basements of Scholomance, this could prove to be a strong card for the Warlock class, especially if we see other cards in the set support discard mechanics.

But even as it is, Boneweb Egg looks like a strong play for a Warlock on their second turn. That’s especially true if you’re playing a Zoo Warlock deck, which prioritizes using cheap minions to flood the board and overwhelm the opponent.