Microsoft is the first of the tech giants to report results for a full quarter during the coronavirus pandemic. In the previous quarter, Microsoft said that “COVID-19 had minimal net impact on the total company revenue.” In Q4 2020, “similar business trends to the previous quarter continued,” Microsoft said. Given its prominent role in the software and cloud industries, the company is worth watching. Unlike tech giants Google and Facebook, Microsoft does not generate the majority of its revenue from advertising and thus may weather the pandemic better. Those two, along with Apple and Amazon, report their respective quarterly earnings next week.

Analysts had expected Microsoft to earn $36.5 billion in revenue and report earnings per share of $1.37. The company thus easily beat expectations, suggesting some (but not all) units are benefiting from the effects of the pandemic. The company’s stock was up 1% in regular trading but down 2% in after-hours trading. Microsoft returned $8.9 billion to shareholders in the form of share repurchases and dividends during the quarter.

COVID-19 impact on the quarter

“The last five months have made it clear that tech intensity is the key to business resilience. Organizations that build their own digital capability will recover faster and emerge from this crisis stronger,” Microsoft CEO Satya Nadella said in a statement. “We are the only company with an integrated, modern technology stack — powered by cloud and AI and underpinned by security and compliance — to help every organization transform and reimagine how they meet customer needs.”

Microsoft’s release noted that “cloud usage and demand increased as customers continued to work and learn from home. Transactional license purchasing continued to slow, particularly in small and medium businesses, and LinkedIn was negatively impacted by the weak job market and reductions in advertising spend.” More cloud usage but slower revenue growth means signing on new customers isn’t so easy during the pandemic. It may also suggest Microsoft is willing to delay or waive bills and fees for Azure customers in hopes of keeping them in the long run. Microsoft does not break out exact Azure revenue numbers, likely to avoid comparisons with industry leader AWS.

Cloud was not the only area that suffered. Yesterday, LinkedIn announced it would cut about 960 jobs, or 6% of its global workforce. Microsoft also noted in its release that “Search was negatively impacted by reductions in advertising spend.”

On the flipside, Microsoft said that Windows OEM, Surface, and Gaming “benefited from increased demand to support work-, play-, and learn-from-home scenarios.” This is in line with PC shipments spiking for the quarter as supply chain issues in China (the world’s largest supplier of PCs) were resolved. 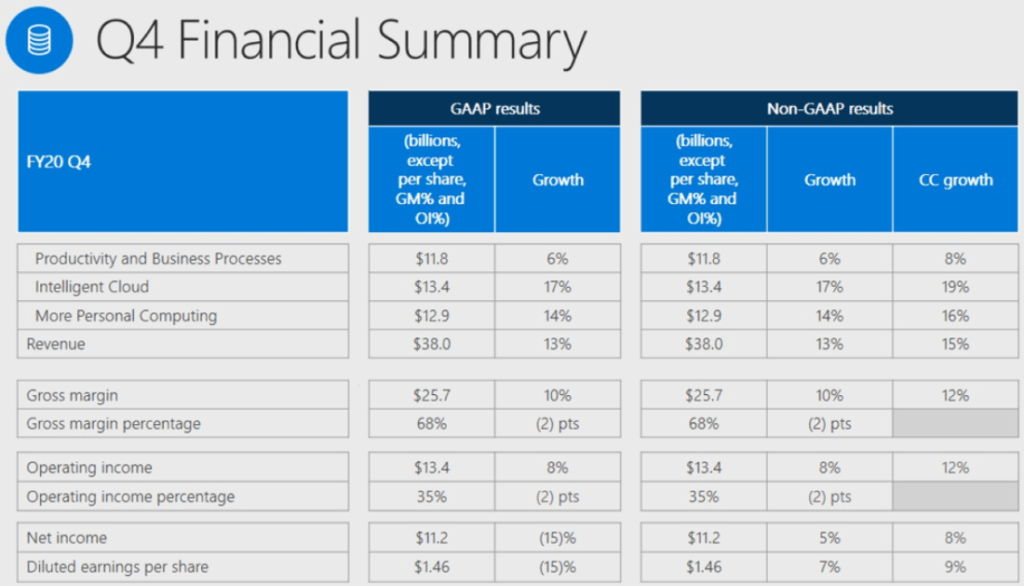 Microsoft Office continues to be a cash cow for the company thanks to its Office 365 subscription. Having over 40 million consumer subscribers of Office 365 is significant, but it still pales in comparison to the enterprise side. In Q3 2020, Microsoft passed 258 million paid Office 365 business seats (up from 200 million) and 75 million daily active users for Teams. On the Q4 2020 earnings call, Nadella said 69 organizations now have more than 100,000 users on Teams and over 1,800 organizations have over 10,000 users on Teams.

Meanwhile, on the Windows side, things are looking up. In Q3 2020, Microsoft warned that “the effects of COVID-19 may not be fully reflected in the financial results until future periods.” But thanks to remote work and remote learning trends, Windows OEM and Windows Commercial revenue were both up in Q4 2020. It’s unclear which is most likely to continue seeing gains: the former as consumers keep buying computers or the latter as businesses invest in new devices.

Microsoft’s LinkedIn was doing well right up until the pandemic. Ever since the December 2016 close of the acquisition, Microsoft had seen double-digit revenue growth from LinkedIn. But in Q3, Microsoft issued a warning: “In the final weeks of the quarter, there was a slowdown in transactional licensing, particularly in small and medium businesses, and a reduction in advertising spend in LinkedIn.” And now we’re seeing the results of that slowdown: gone are the quarters of 20%+ growth.

Surface continues to bring in $1 billion each quarter. Q1 2020 ($1.35 billion) and Q2 2020 ($1.98 billion) followed the usual pattern, in that the former is the company’s worst quarter for Surface, while the latter is the best. Q3 2020 ($1.34 billion) was flat, which was good news for Microsoft, given that PC shipments were down overall. Q4 2020 ($1.72 billion) was excellent as Microsoft rode the wave of increased PC demand. In May, Microsoft started shipping the Surface Book 3, Surface Go 2, Surface Headphones 2, and Surface Earbuds. We’ll have to wait for a full quarter of sales to gauge how they fared, though Microsoft doesn’t break out individual devices.

For gaming, Q1 2020 and Q2 2020 were disappointments for Microsoft. Q3 2020 was a little better, and Q4 2020 was a home run. Xbox content and services revenue increased 65%, and gaming revenue as a whole increased 64%. Microsoft stopped breaking out Xbox Live monthly active users a few quarters ago. But given that games are performing well during the pandemic, the company has plenty to be happy about ahead of the Xbox Series X debut this holiday season.