Game publisher TinyBuild revealed today that Hello Neighbor 2, the sequel to the hit game series Hello Neighbor, will debut in 2021.

The company revealed the news in a trailer on Geoff Keighley’s Summer Games Fest event ahead of the Xbox Games Showcase today. Last week, TinyBuild announced it would acquire the Hello Neighbor property from Dynamic Pixels and invest more than $15 million in the franchise.

In the trailer, you return to your creepy neighbor’s house. In the first game, you had to sneak inside the house, explore the dungeon, and then make it out alive. This time, the home looks a lot creepier, and you’re trying to evade a person wearing some kind of bird mask. The puzzle-based gameplay looks similar to the original.

Hello Neighbor 2 will be coming to both Xbox Series X and Xbox One and will support Smart Delivery, which means you can also play it on other Microsoft systems as you wish.

Back in March, TinyBuild announced that Hello Neighbor — a horror game about a neighbor with a secret in his house — had seen over 30 million downloads, and last week the company said the game has more than 40 million players. In addition to games, TinyBuild said its book project has generated $16 million in sales and $5 million in accessories sales.

The company has recently been giving out its new game, Totally Reliable Delivery Service, for free on the Epic Games Store. The first game is available on the PC, Xbox One, PS4, Nintendo Switch, Android, and iOS. TinyBuild has also published a prequel, Hello Neighbor: Hide and Seek, and multiplayer spin-off Secret Neighbor.

TinyBuild CEO Alex Nichiporchik was born in Latvia and lives between the U.S. and the Netherlands. He started his game career in 2002 at the age of 14, when he dropped out of high school to become a pro gamer. He worked as a games journalist, marketer, and producer across casual games and web games before starting TinyBuild with Tom Brien in 2011. TinyBuild has published over 30 titles. 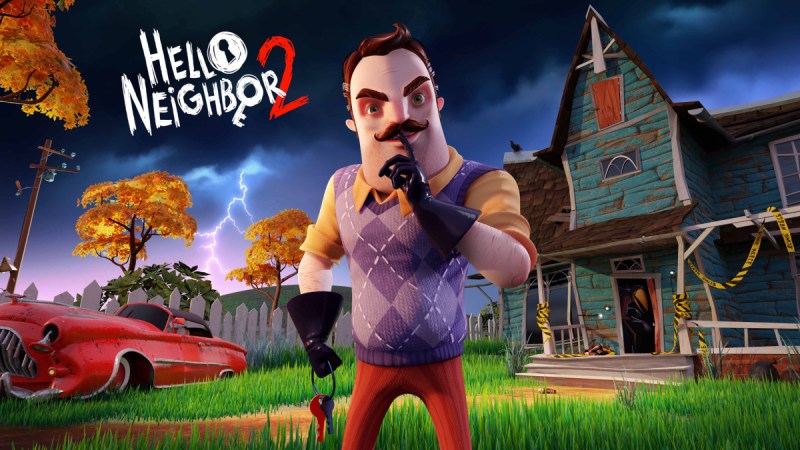 Above: Hello Neighbor 2 will be on the Xbox platforms.

Hello Neighbor 2 takes place directly after events of the original. Players will explore an open world while searching for the mysteriously disappeared Mr. Peterson (the Neighbor) and being stalked by a mysterious, raven-like being. The neighborhood is called Raven Brooks, and it’s a place where people have been mysteriously disappearing.

You play as Quinten, a local journalist investigating missing persons cases. A string of clues leads you to a creepy abandoned house — the home of the events of the original Hello Neighbor game — to discover it’s occupied by a mysterious raven-like being. Naturally, you want to sneak into this house to find out what’s going on.

Players will explore a creepy abandoned house while being stalked by an AI, and the gameplay will expand into the open world of Raven Brooks. Unlike the original, where the AI you were playing against navigated by manually placed waypoints, in Hello Neighbor 2 the AI behavior and navigation patterns are fully dynamic. The AI will observe player behavior and what they do, and it will try to use that knowledge to its own advantage in order to prevent players from figuring out the secrets.