After playing a bit of Crash Bandicoot 4: It’s About Time, I’m confident that this is the Crash sequel that I’ve been waiting decades for.

Crash Bandicoot 4 comes out for PlayStation 4 and Xbox One on October 2 (no news on next-gen versions yet). Developer Toys for Bob gave me a sneak peek at a few levels from the platformer and then sent me a demo for PlayStation 4, so I could play those same three levels.

It’s About Time, historically, has a lot going against it. For most fans of the series, we haven’t had a good Crash adventure since the third game, Warped, came out for the original PlayStation in 1998. After that — not counting a short detour in the kart racing world — developer Naughty Dog was done with the franchise. Since then, Activision Blizzard has given the franchise to studios such as Traveller’s Tales and Radical Entertainment. But nothing ever reached the heights of those Naughty Dog originals. After the 2008 release of Mind over Mutant, Activision Blizzard seemed to give up on the franchise.

However, a package of remakes of the first three games saved the franchise. The N. Sane Trilogy came out in 2017 and turned those Naughty Dog classics into beautiful, modern platformers. It’s a huge hit, selling over 10 million copies. This success is why Crash Bandicoot 4 exists. It also explains why this new game is sticking close to the originals’ themes and mechanics. 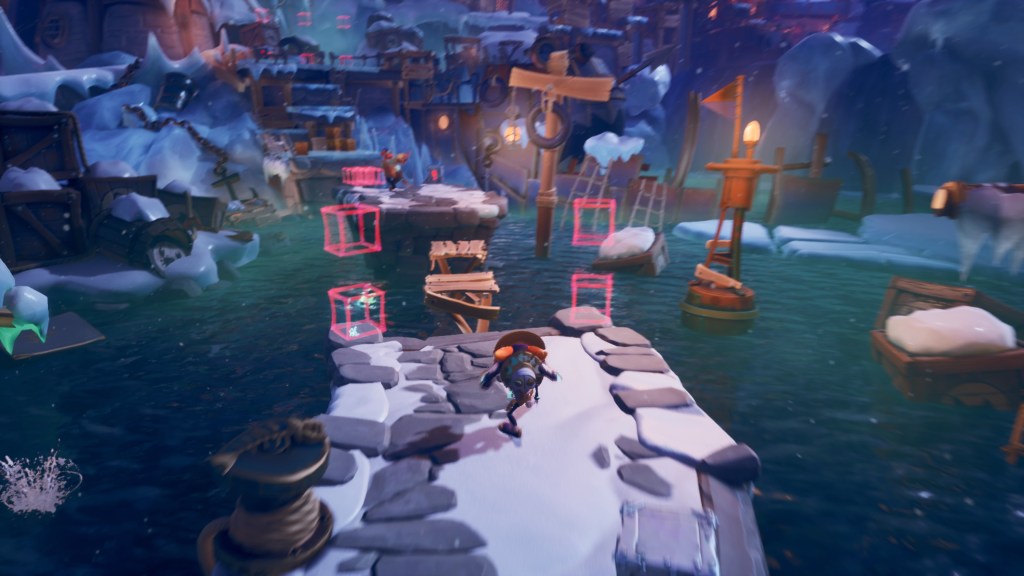 Above: Slowing down time can help you hit those crates before they disappear.

Like that first trilogy, It’s About Time is a linear platformer. Some sections focus on corridors, having you move around narrow 3D environments, while other areas shift the perspective into a 2D view. The core mechanics rely on the essential fundamentals of all platformers: jumping and dodging.

The demo’s first level is an ice fishing village … and the villagers are zombies. As you can imagine, this stage has some icy areas that make maneuvering a bit slippery. But it also shows Toys for Bob’s creativity. We’ve seen ice levels in platformers hundreds of times. I can’t say I’ve ever seen a zombie fishing village before.

While the gameplay will feel familiar to anyone who has played the N. Sane Trilogy, you do have some new abilities that add some variety. These come via new masks that temporarily unlock new reality-altering powers. In the fishing village level, one of the masks lets you slow down time for a few seconds by pushing the R2 button. You can then run across fast-moving platforms that would be impossible to navigate under normal conditions. You can also safely jump on nitro crates — which usually explode immediately upon contact.

Another level takes place in prehistoric times, full of dinosaurs and man-eating plants. Here, another mask makes it possible to shift objects in-and-out of existence. During a rail-grinding segment, pushing the R2 button makes an obstacle disappear from my path, saving me from colliding with it.

Neither of these are new ideas in the world of platformers, but they offer Crash Bandicoot some needed variety. It permits Toys for Bob to stick close to the original games while giving players some new tools. 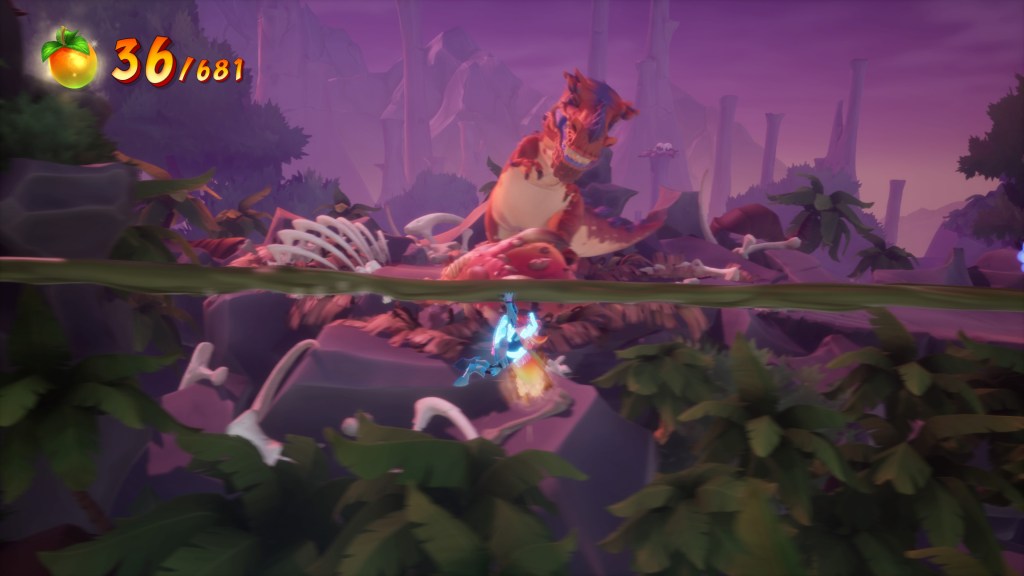 Above: That dinosaur has spotted his next meal.

But variety comes in other surprising ways. The third part of the demo goes back to the zombie village. This time, I’m playing Neo Cortex, the mad scientist and Crash’s arch-nemesis. Neo has a unique set of abilities. He can dash through the air, and he can shoot his ray gun to turn enemies into platforms. Shooting that new platform again will turn it into a bouncy one. So instead of depending on double-jumps and slides to get around, as you would as Crash or Coco, you have a completely different style of play with Neo.

When I played through this level the first time, Crash came upon a large ship that was frozen into an iceberg. When I neared it, the ship mysteriously exploded. Playing as Neo, I now get to a point where I see why that happened, with a cutscene showing Cortex detonating explosives on the ship. After that, it goes back to Crash, but this time it’s like a hard mode version of the stage. Toys for Bob calls these Timeline Levels. They are optional from the main stages, but they offer new challenges and characters to play as.

Outside of the demo, Toys for Bob shared some other details about Crash 4. You will explore levels in a linear fashion, more similar to how you did in the first Crash Bandicoot than in its two sequels. This is so that Toys for Bob can ease players into new mechanics, like those masks. And if you’re a fan of Crash’s sister, Coco, you’ll be happy to know that you can play the whole game as her. 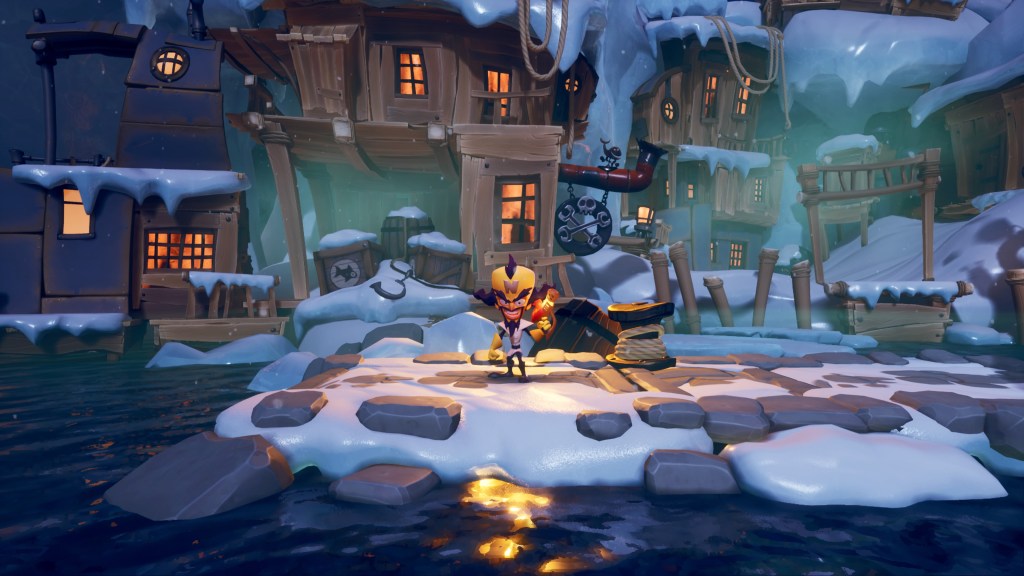 Above: Cortex has a ray gun that turns enemies into platforms.

You may be wondering why Modern Mode players would still want to collect wumpa fruit. Normally, getting 100 of them gives you an extra life. For Modern players, getting all of the wumpa fruit in a level is like an additional goal, similar to how breaking open every crate in each stage has been in the series. 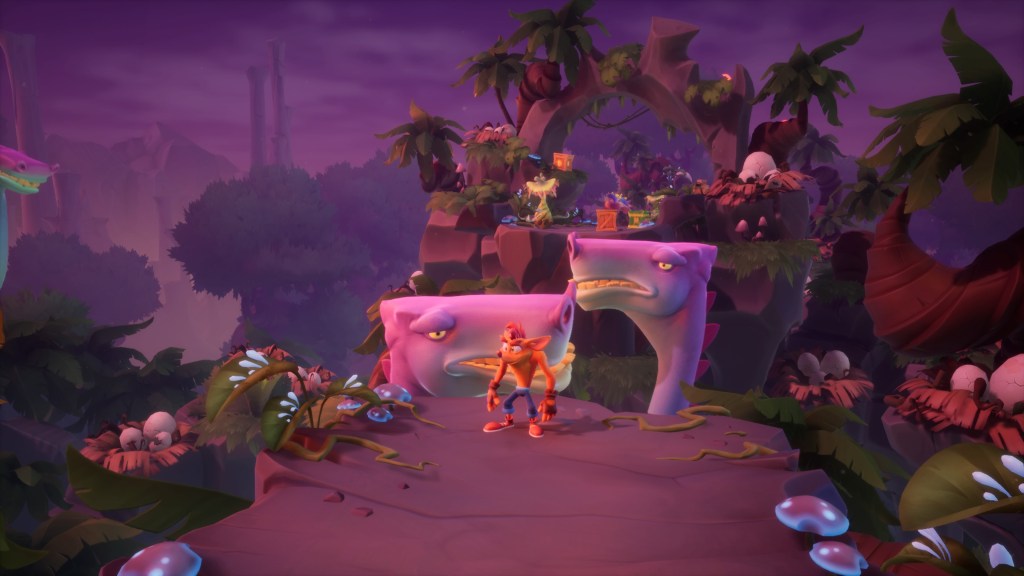 The best thing I can say about Crash 4 is that it feels like Crash Bandicoot. If you loved either the originals or the remakes, you’re going to be happy to find a faithful experience in It’s About Time. It also offers a good challenge. The levels I played weren’t as hard as some of the cruelest stages in the first Crash, but they felt comparable to the overall difficulty of Crash 2 and Warped. The developer is making efforts to please long-time fans.

But Toys for Bob deserves credit for finding fun ways to flex its creativity muscles. The stages that I’ve seen are beautiful, fun, and vibrant. I love the character animations, especially from the big, lumbering T-rex chase in the prehistoric level. And the mask abilities and Neo Cortex sections offer some needed variety.

It took over two decades, but this demo may show that we’re finally getting that sequel to Crash Bandicoot: Warped that franchise fans have been dreaming of.