AppsFlyer said mobile app and game fraud was $1.6 billion in the first six months of 2020, down 30% from a year ago, based on its latest research. But while the drop is good for the mobile industry, the numbers show serious money is still at risk.

As the pandemic stretches on and people continue to turn to apps for daily tasks and entertainment, advertisers must remain one step ahead of conditions that might cause fraud to rise again, the company said. The San Francisco-based mobile marketing firm said the global financial exposure to app and game fraud is down, due to greater awareness among publishers and developers, as well as better methods for protecting against app-install fraud. But forms of fraud dubbed post-attribution — installs that cannot be blocked in real time — and in-app fraud are a growing problem. In its State of Mobile Ad Fraud 2020 Edition, the company said most mobile advertisers are increasingly aware of the dangers of app install fraud but cautioned that fraud isn’t going away anytime soon. 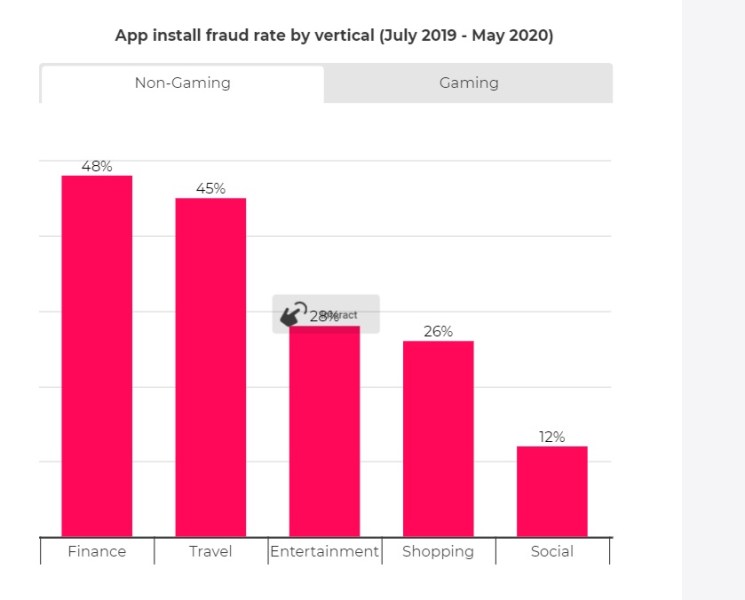 AppsFlyer found that the global financial exposure to app install fraud was down 30% because of a clear drop in the overall app-install fraud rate, which averaged 13.2% in the first half of 2020. But it noted financial exposure for apps in the finance app category amounted to $630 million in the first six months of 2020. The report also showed that ad fraud on Android is over 4.5 times higher than it is on iOS.

The U.S. experiences low rates of app install fraud — an average 3.4%, which is 75% lower than the 13.2% global rate. Asia Pacific markets, which are traditionally more exposed to ad fraud, are responsible for nearly 60% of financial exposure worldwide for a total of $945 million. There has also been improvement in Asia Pacific, particularly in Southeast Asia, where rates dropped 50% in April-June 2020 versus July-September 2019.

Gaming apps are largely successful at beating fraud, which companies have been fighting for a longer time. Among non-gaming apps, 32% of non-organic installs are fraudulent, while gaming apps see a much lower rate of 3.8%.

Among non-gaming verticals, finance (48%) and travel (45%) suffer from the highest fraud rates, due to high cost per install rates and large marketing budgets.

Bot attacks continue to dominate, with 62% of fraudulent installs a result of bot attacks. However, other methods, such as install hijacking (particularly for gaming apps) and click flooding, are on the rise, with click flooding up to 21% in Asia Pacific.

Post-attribution fraud is also on the rise. This type of advanced fraud climbed to 24% globally in January and February, peaking at 51% of apps in March. There has also been a substantial increase in in-app fraud, especially among gaming apps, as fraudsters eye lucrative cost per action (CPA) payouts on top of cost per install (CPI) payouts. 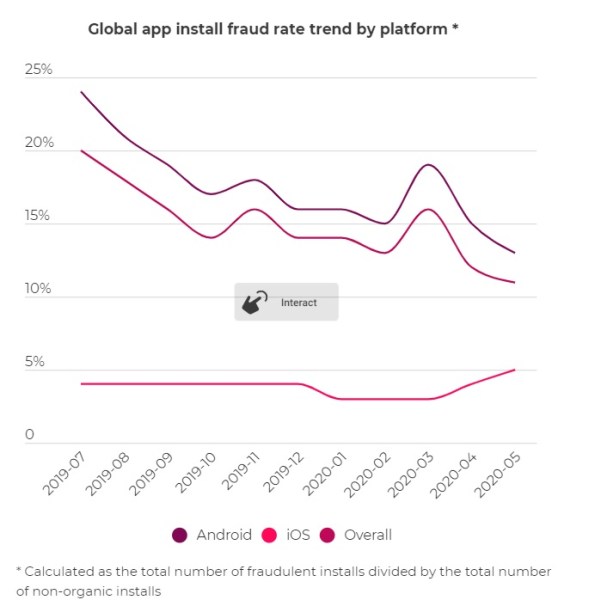 Above: Android is far more vulnerable to fraud than iOS.

The only significant exception to the downward trend in ad fraud occurred in March, when COVID-19 forced many countries to implement strict lockdowns. While people remained at home, the demand for mobile apps spiked, leading to aggressive user acquisition activity, and fraudsters were tempted to reap the rewards.

As a result, the fraud activity rate in March increased by almost 25% compared to February. These attempted attacks were largely unsuccessful, however, leading to a similar drop the following month.

Use of social apps jumped during lockdowns, leading to an increase of 12% in fraud in the U.S. In some verticals, such as entertainment, app marketers were able to meet heightened consumer demand while keeping their apps relatively safe from fraud. Entertainment app fraud in the U.S. held steady at 4% throughout the stay-at-home period.