An MIT report estimates truly autonomous vehicles might not hit the streets for a decade. And when they do, it’s difficult to say whether they will fully accommodate all riders, including those with disabilities. Driverless car technology promises to remove barriers to personal transportation, but few self-driving operators have made headway on solutions for customers with mobility, vision, and hearing impairments, including seniors and those with chronic health conditions.

Some companies are further along than others. Alphabet’s Waymo is engaged with collaborators — including the Foundation for Senior Living in Phoenix and the Foundation for Blind Children — in an effort to ensure its vehicles remain accessible. Cruise has similarly partnered with the National Federation of the Blind, the American Council of the Blind, Lighthouse for the Blind, and local communities to conduct usability studies and solicit feedback. Still, experts say there’s more to be done as the autonomous vehicle horizon extends well into the future.

“Autonomous vehicles hold incredible promise for people with disabilities to enjoy the enormous freedom that most adults have to live spontaneously and to be independent travelers,” Sheryl Gross-Glaser, director of the nonprofit Community Transportation Association of America, told VentureBeat. “But just as we need to enable someone with a walker or wheelchair to enter and exit a vehicle, we need redundant technologies that serve people with auditory or visual impairments and technologies and designs that assist people with cognitive disabilities. Those exist, and they should be used in designing autonomous vehicles so that all autonomous vehicles will be accessible.”

An estimated 25.5 million people in the U.S. have disabilities that make traveling outside the home difficult, and they make fewer trips on average than those without disabilities, regardless of age, according to the U.S. Department of Transportation’s 2017 National Household Travel Survey (NHTS). Seven out of 10 people surveyed in the NHTS said they reduce day-to-day travel because of their disabilities, and one-third of people who made zero trips said they stayed home because they’re severely disabled or housebound.

“For people like older adults, facing the prospect of losing the ability to drive due to aging-related illness is taking away freedom and hampering their independence. Some of the toughest conversations that I’ve seen families have is when they need to confront a parent or spouse about taking their keys away,” Foundation for Senior Living president Tom Egan told VentureBeat. “For many people who have dementia, they need door-to-door service, not a curb-to-curb service, and hence will need a caregiver or someone to get them into their home or destination without them becoming confused and wandering off.”

Perhaps unsurprisingly, people with disabilities are more likely to encounter obstacles with nearly every mode of transportation. In a 2003 survey conducted by the U.S. Department of Transportation, nearly 20% reported that their disability makes transportation difficult to use, with limited public transportation being the most frequent complaint.

Research has linked the resulting isolation to health problems and even early death. A 2014 survey by the U.S. Centers for Disease Control and Prevention found that 44% of those with disabilities experienced depression at least once in their lives, compared with 11% without a disability. “While depression is often a psychological disability in and of itself, it is important to think of it as a comorbidity,” the coauthors of a study from the Ruderman Family Foundation and Securing America’s Future Energy (SAFE) wrote. “People with a significant functional impairment may live with depression due to isolation as a direct result of a lack of mobility options.”

NHTS highlights accessibility features in private vehicles, including hand controls, wheelchair lifts, rear-view video, and blind spot detection. But in the same breath, the report notes that these technologies increase the cost of vehicles, potentially putting them beyond the reach of the 51.4% of people age 18 to 64 with “travel-limiting” disabilities in households with annual incomes under $25,000.

That’s assuming private autonomous car ownership is eventually popularized, which seems unlikely. Guidehouse Insights principal analyst Sam Abuelsamid estimates that self-driving technology would add $5,000 to $20,000 to a vehicle’s price. For that reason, autonomous ride-hailing fleets like Waymo One appear to be the prevailing near-term model. But despite their advantages from the perspective of economies of scale, Gross-Glaser sees little evidence that self-driving companies are treating accessibility as a priority.

“In transit, due to the Americans with Disabilities Act (ADA), accessibility has become incorporated into vehicle design … But with little in the way of exceptions, I have not seen any commitments, promises, designs, or proposed legislation or regulations that would guarantee significant progress in autonomous vehicle accessibility,” Gross-Glaser said.

However, she points out that there has been progress in recent years.

In 2018, Renault showcased the EZ-GO, an electric driverless ride-share vehicle with an oversized entry port that lifts up to reveal an extendable ramp for wheelchair access. And in May 2019, Volkswagen unveiled its Inclusive Mobility Initiative (IMI), through which the automaker is working directly with outside groups like the Disability Rights Education and Defense Fund, the National Federation for the Blind, and the National Association of the Deaf to ensure the company’s vehicles cater to people with disabilities. IMI’s recommendations have already informed the design of a concept autonomous van — the VW’s Sedric — with tall roofs and doors designed to accommodate wheelchairs.

Self-driving shuttle operators have made accessibility inroads, too, courtesy of collaborations with organizations like IBM and the CTA Foundation. In 2018, Local Motors launched a shuttle that can direct visually impaired passengers to empty seats using machine vision to identify open spots and audio cues for direction. Meanwhile, May Mobility developed a wheelchair-accessible prototype version of its autonomous vehicle with a mechanism for securing a passenger’s wheelchair during the course of a trip. 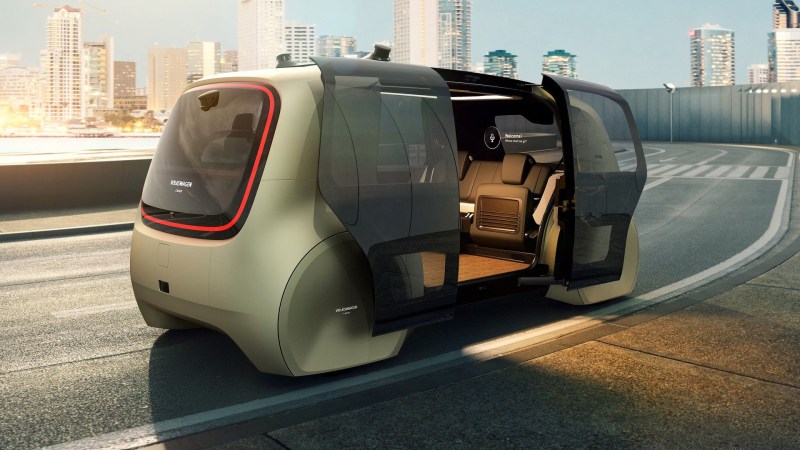 “Autonomous vehicle shuttle companies have been, at least, adhering to the threshold for accessibility of ADA regulation,” Gross-Glaser said. “This is not perfect, but transit has shown itself willing to serve and advocate for people and communities who are transportation-vulnerable.”

Waymo has stopped short of some of the accessibility steps its rivals have taken. But the company designed the apps its customers use to hail rides with support for screen readers like TalkBack on Android and VoiceOver on iOS. Those apps also offer wayfinding features and ways riders can ask their vehicle to make a sound to help guide them. Within Waymo’s self-driving Chrysler Pacificas, Braille labels allow vision-impaired riders to start the ride, pull it over, and speak to an operator who can provide further assistance. And through every phase of the ride, deaf and hearing-impaired riders have access to on-screen visual information about what’s happening around the vehicle.

“We continue to learn about the unique needs of different riders, and what we learn will inform new features that will make the experience accessible to people who have historically had to rely on others to get around,” a Waymo spokesperson told VentureBeat. “This technology offers incredible promise for people with disabilities, which has been part of our mission from the beginning.”

Megan Strickfaden, an anthropologist at the University of Alberta, argues these efforts don’t go far enough. She’s the coauthor of a 2019 study that outlines steps autonomous vehicle operators must take to ensure they don’t exclude members of disabled populations, including those with low vision and hearing and with mobility challenges.

In the report, Strickfaden points out that even vehicles with wheelchair accessibility features, for example, could fall short of acceptable usability and safety baselines. Steep road inclines could destabilize wheelchair ramps, and bumps in the road might cause a wheelchair to tip or fall. Injuries and fatalities have resulted from improperly restrained wheelchairs, and travelers with vision and other impairments have much lower chances of evacuating vehicles during emergencies.

Strickfaden advocates for a standard, “universally designed” autonomous vehicle with a side entry ramp and user interfaces that can accommodate riders regardless of their physical abilities and skill levels. (In this context, “universally designed” refers to the paradigm envisioned by Ron Mace at North Carolina State University’s Center for Universal Design in which products are designed to be usable by all people without adaptation.) Strickfaden also recommends specific assistive technologies for eye tracking, gesture recognition, and voice control that could afford those with tactile, mobility, and hearing impairments a semblance of control without the need to make physical contact.

Beyond vehicle considerations, Strickfaden says robo-taxi operators should consider ways to address practical challenges around pickup and dropoff for those with disabilities. Some customers will need assistants to help load and unload groceries and other items, she notes, and vehicles should be preprogrammed to provide ample time to load and unload essential equipment, like walkers, service animals, and wheelchairs. 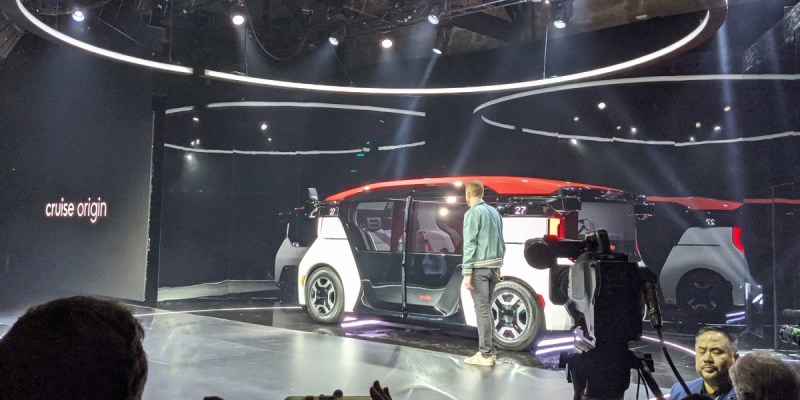 Above: The GM Cruise Origin, a concept car with room to accommodate a wheelchair.

“Due to the freedom from driving that AVs allow for all of us, there is a unique opportunity in history to vastly improve the lives of millions of people with disabilities,” Gross-Glaser said. “I hope that everyone can support that because all of us will grow old, if we are fortunate to live long lives, and many of us will need, either permanently or temporarily, the assistance that accessibility affords.”

If autonomous cars were to be designed with inclusivity in mind, experts say the societal benefits could be enormous. Ruderman found that mitigating transportation obstacles would enable employment opportunities for 2 million people with disabilities while saving $19 billion annually from missed medical appointments. (Approximately 4.3 million people with a disability face significant transportation barriers when attempting to travel to their medical appointments, according to a National Academies of Sciences model updated by Ruderman and SAFE.) In something of a case in point, Detroit Medical Center Heart Hospital this month began offering self-driving shuttle service from Navya to two local Detroit senior living communities.

Another potential impact of inclusive transportation might be increased civic participation. A 2013 study by the Research Alliance for Accessible Voting suggest 3 million more people would have voted in the 2012 U.S. elections had those with disabilities voted at the same rate as those without.

“When autonomous vehicles are widely available, it is a game changer for a senior population and adults with special needs. Being able to request a ride in a self-driving car allows that senior to maintain their independence,” Egan said. “They are in control of requesting a ride and getting themselves to their destination. I believe this will make the decision to give up one’s own car an easier conversation for families around the country.”