Nintendo is preparing a new model of its Switch hardware for the first quarter of 2021, according to a report out of Taipei newspaper Economic Daily News (via VGC). I can’t confirm the rumor, but my feeling is unchanged since we started hearing about the Switch Lite. The company that released six 3DS models probably has several more Switch revisions in the works. These upgrades give Nintendo a chance to get its most loyal fans excited to spend money on hardware again. It’s an old trick that the company has turned to since the NES, and it’s one that Sony is using with the PlayStation 5 when it talks about believing in generations.

The latest Switch Pro rumor claims the system will come with an improved display. I’ve written before about my hopes for the next Switch system. And an HDR 120Hz 720p panel would make a big difference. I also hope the Switch gets an SSD and more memory to help with ports from PC and other consoles. But the Economic Daily News report also talks about upgraded “interactivity” for the Switch. And that’s the key takeaway — at least from the business and marketing perspective.

To explain what I’m talking about, we have to look at R.O.B. — the robot toy that Nintendo bundled with the first NES systems in the United States.

Let’s do a quick history lesson. The video game market crashed in the United States in 1983. Too many companies released too many bad video games, and that meant consumers could get a stack of cheap games at the grocery store. But that also meant they weren’t buying new video games at full prices. This was unsustainable, so Atari drove truckloads of cartridges out to a dump in the desert. And everyone else considered the home console a fad.

In 1985, Nintendo was looking to bring the Nintendo Entertainment System from Japan to the United States. But retailers and consumers were still wary after the crash. So Nintendo’s marketing team came up with a plan. They bundled the NES with an interactive robot called R.O.B. (the Robotic Operating Buddy). And instead of putting the console and games at the center, Nintendo pitched R.O.B. as a must-have toy.

It didn’t matter that R.O.B. was a dud. Once the NES was in people’s homes, they were too busy enjoying the video games to care. And now retailers were dealing with customers asking where to get more cartridges for the NES.

The plan worked, because Nintendo understands something important about consumer behavior: The reasons we come up with to justify purchasing something have almost nothing to do with how happy we are to own that thing.

Marketers sell the sizzle and not the steak because we don’t buy products — we buy promises. 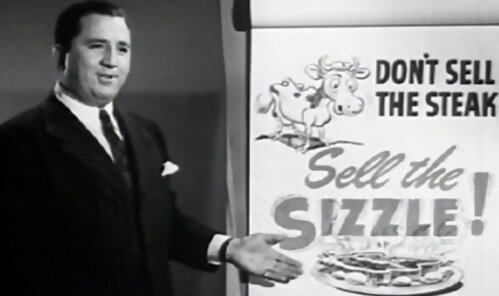 Above: What are you really buying?

The sizzle of the 3DS, the New 3DS, and the PlayStation 5

Let’s give some modern examples of this strategy. It continues to work, so companies keep turning to it. And even when customers recognize the misdirection, they still often like the magic trick. Consoles are expensive, and you want to believe the promises because it makes it easier to accept forking over hundreds of dollars.

The 3DS and the Switch

In 2011, Nintendo launched the 3DS. And as always, the company packed on the extra features to help get consumers excited about the future of the device.

One of the things about selling promises is that sometimes, companies deliver on them. The 3DS and Switch systems have examples where Nintendo did just that (and also where it didn’t). Nintendo promised no-glasses 3D with the 3DS, and it actually worked as advertised. Just like the Switch emphasized the play-anywhere functionality that sits at the core of that device.

But the 3DS also came with augmented reality apps and a pack of cards to use with the 3D cameras. And Nintendo talked up the potential of HD Rumble haptics that enable you to feel objects in Switch games. Both of these are examples of bullet points you’ll find on the back of the box that didn’t (or have not yet) amounted to much.

This is something I’ve experienced. When Nintendo announced the New Nintendo 3DS in 2014, I was excited to get one in part for the analog nub. This would give us built-in dual-analog controls in 3DS games. I was excited for it.

I don’t think I ever used the nub in any game.

And this is the point. Nintendo is willing to include features in its hardware that it knows most games probably won’t implement. It spent money adding the nub, and I never touched it during gameplay. But that doesn’t matter, because Nintendo never intended for the nub to improve 3DS games.

It was part of the cluster of reasons I justified spending money to buy a New 3DS, and that was its exact purpose.

PlayStation 5 and the DualSense

An even more recent example of this marketing method is Sony’s PS5.

Sony has emphasized repeatedly that it “believes in generations.” It uses this to explain its thinking about the divide between PS4 and PS5. And this is certainly marketing and a strategic decision because, technically, the PS5 runs on the same X86 platform as the PS4.

When Sony Interactive Entertainment boss Jim Ryan says he believes in generations, what he’s really saying is that he believes PlayStation fans want to feel like they’re getting something new with the PS5.

With that purpose in mind, Sony is promising to completely redo the interface for PS5. The company also won’t enable players to use the PS4’s DualShock 4 gamepad to control PS5 games.

“We believe that PS5 games should take advantage of the new capabilities and features we’re bringing to the platform, including the features of DualSense wireless controller,” reads a Sony blog post.

The DualSense has a built-in microphone, haptics for feedback, and active-resistance triggers. And I find myself getting excited for the PS5 to get those features.

It’s the New 3DS nub all over again.

I don’t know if Sony and its partners are going to see through the promises of the DualSense. But that doesn’t matter. They exist to make me want to buy the console. And they’ll likely have little impact on whether or not I end up happy with the PS5 in a few years.

Planned obsolescence is the norm, so expect it in the Switch Pro

The term for this kind of marketing is “planned obsolescence.” It has worked for the automobile industry for nearly a century, and it works the same for video games. Even if the PS4 and PS5 aren’t all that different, Sony wants its consumers to perceive a large gap in features. It wants you to feel like the PS4 is old and the PS5 is the future. And maybe that is exactly how it will all play out — but again, it doesn’t matter if it does or not. The goal here is just to get you to make the purchase.

We’re so accustomed to this way of doing things that Microsoft almost seems weird by deliberately undermining planned obsolescence. It’s going to keep making games for the last console. The Xbox One controller works on the Xbox Series X. And it’s maintaining the same interface between devices.

This has led to some fans saying that they wish Microsoft was giving them more reasons to want to spend money on a new device. We don’t know how to feel about a company that doesn’t seem to mind if we’re going to wait and see when it comes to their next product.

But Microsoft has different incentives with Xbox Game Pass. Nintendo, however, is as traditional as they come.

So yeah, I expect Nintendo to announce that the next Switch will have some kind of weird “interactivity.” And I’m sure I’ll get it. But I’m not going to get mad at Nintendo or Sony if they don’t keep their promises. After all these years, I’ve learned not to take salespeople too seriously.