Xbox Game Pass Ultimate is launching the option to stream games from the cloud beginning tomorrow, September 15. This will give subscribers in 22 countries the capability to play full console games on an Android device. Like Netflix, you won’t host anything locally. Instead, you control what is effectively a video feed that is piping into your device from a remote computer. And I’m hoping that this is the last time I’ll have to explain cloud gaming, because the tech is right on the cusp of going mainstream. Or, at least, that’s the aim for Microsoft (and competitors like Google and Nvidia). But the problem is no longer the tech. That part works. The issue is what’s in your hands and home.

When you move objects like letters and parcels, the most expensive part of the shipping journey is the last mile. It requires the most time and effort. Something similar happens with remote gaming. Microsoft can build a pristine network on the backbones of the internet to deliver games to its customers in an instant, but once that video feed hits a person’s home, it’s up to the end user to get a decent experience.

In part, this is a home-networking problem — or mobile-data problem when travelling. But I think the more pronounced complication is with the hardware you’ll use to interface with cloud games.

Microsoft wants to get more subscribers onto its $15-per-month Xbox Game Pass Ultimate, which includes cloud streaming at no additional charge. That service has 150-plus games and is getting even more soon. You can find the whole list on the Xbox News blog.

But if this is going to work, Microsoft will have to pay a lot of attention to the last-mile experience.

The most obvious way to play a cloud-streaming game is on your phone, but what are you going to do for controls? You can use onscreen buttons if you’re an animal, but most people will want a controller. These games were made for gamepads, and you should use one. And no real comfortable way exists to combine your phone and a controller into one cohesive gaming unit. Instead, we are currently settling for the phone clip. 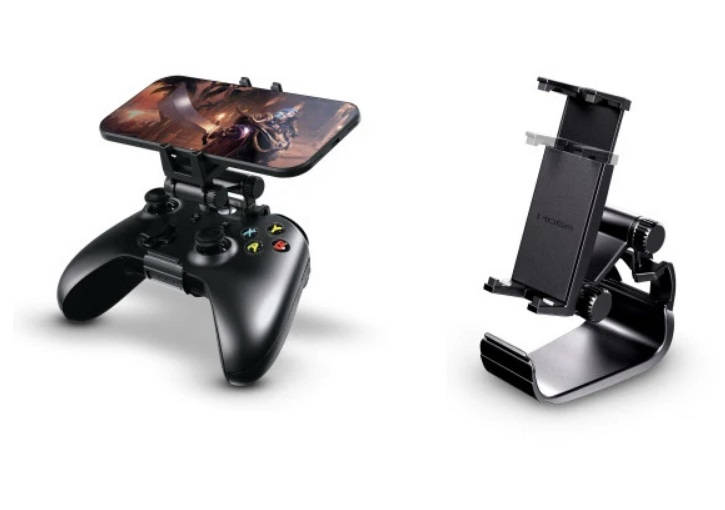 Above: A phone clip.

These clips are pieces of plastic that wrap around your gamepad and then clamp your phone over it. This is a functional form factor, and that’s the nicest thing I can say. Even at their best, they are uncomfortable. The whole thing is too heavy and too wobbly. For example, I don’t like using this setup when laying down because it feels like the phone is going to fall out. It probably won’t, but it feels like it will. Subconsciously, I end up cradling the clip and phone slightly in a way that fatigues my hands.

But even outside of the comfort, it’s just a lousy experience. The clamp always hits my volume rocker, so I need to offset the device slightly. This ends up with me holding the controller off-center so the screen is still in the right place. It’s not a great experience.

I found a smartphone cloud-gaming setup that I do like, though. Razer’s Kishi is a universal snap on gamepad that the company designed for phones. The one I tested works with nearly any Android handheld device, and you can get it for $80 (or $100 with Xbox branding).

The Kishi is great in a lot of ways. It’s decent as a controller, but I appreciate that it isn’t Bluetooth. Instead, it plugs directly into your phone for low-latency play. The design also makes your phone feel a bit like a Switch, which is my favorite way to play handheld games.

But I don’t love the Kishi. It’s a good device that I like using, but it is this separate clunky thing you have to buy and carry with you if you want to game. And generally dislike having my phone stuck in anything like a shell or clamp. Typically, I keep my phone right with me when I’m playing something, but I lose that when I’m using the Kishi to play. This stinks when I feel like checking social media during a long loading screen.

All of this makes me wish I could get Microsoft’s xCloud streaming on Switch (without homebrew solutions). Nintendo does not seem open to that, though. So I would welcome a dedicated Xbox handheld. Maybe something that is great at running indie games and then could stream the rest from the cloud. Maybe get to work with the Surface Duo team on a sleek controller add-on and then let me use my second screen while I’m playing games. I’d probably still wait for a second-generation Duo, but I’d strongly consider it if it included a solution for the cloud-gaming formfactor problem.

Microsoft knows what it needs

The one thing I can say about Xbox Game Pass Ultimate and cloud gaming is that Microsoft seems to understand these problems. It has partnered with Samsung and Razer to specifically address these concerns. During Samsung’s Unpacked event in August, Phil Spencer joined the broadcast to talk about bringing Game Pass to Galaxy phones. And having hardware partnerships like this could prove important. If Microsoft thinks of something it wants or needs to improve streaming, Samsung is a market leader. It can do something and others will follow.

But it goes beyond phones and consoles. Samsung also makes televisions, and the idea of getting Xbox Game Pass Ultimate directly into a smart TV is compelling. If all you need to get started gaming is to install an app on the TV you already have in your family room, Game Pass could end up catching on quick. And again, partnering with Samsung could mean moves like including an Xbox gamepad with certain TVs.

Microsoft can make this work, and I hope it does. I’m too busy for traditional console gaming. Give me something that can move with me, runs high-end games well, and is as comfortable as the Switch. It’s not at that level yet, but Game Pass seems like it understands that trajectory.