Facebook’s Oculus Quest 2 standalone virtual reality headset will arrive October 13. And Facebook and its VR developer partners have made sure that a bunch of new games will arrive at the same time, making a bunch of announcements today at Facebook Connect.

With the $80 Oculus Link cable, the Quest 2 can run games that would normally require a Rift headset with a PC. This means Respawn Entertainment’s upcoming Medal of Honor: Above and Beyond will work on the Quest 2. This strategy will enable Facebook to give players a wider library at launch. On top of that, there are already hundreds of titles available on the Oculus Quest, and Quest 2 will play those games as well.

Facebook also announced that Ubisoft is creating new VR titles in the Assassin’s Creed and Splinter Cell universes. Those efforts are being led by Ubisoft’s Red Storm, in collaboration with Ubisoft Reflections, Ubisoft Dusseldorf, and Ubisoft Mumbai. Facebook executive Mike Verdu said that so far, 35 games have generated revenue in the millions on the original Quest. Five Nights at Freddy’s: Help Wanted hit $1 million in just eight days, while Onward made $1 million in just four days.

One of the bigger titles in the works from ILMxLab is Star Wars: Tales from the Galaxy’s Edge, a collection of light-hearted experiences in VR where you can hang out on the planet Batuu or go to the Cantina on Tatooine. There are more games on the list from Japan because the Oculus Quest 2 will debut there at launch.

Among the new games coming for the Quest 2 are:

Above: BTS is launching a pack on a multiplayer-enabled Beat Saber.

The South Korean music superstar band BTS will add 12 of their songs to Beat Saber, the popular rhythm title from Beat Games (which Facebook now owns). And players will be able to learn dance moves and experience BTS’s music together in a new multiplayer mode.

This claims to be the first major battle royale for VR. Its vertical combat system gives players the freedom to attack from just about any direction. Holding the high ground is key in this title, which has unique perspectives compared to other battle royales like Fortnite or Call of Duty: Warzone. This is one of the eagerly awaited titles among hardcore gamers.

You can wave your glowsticks to the rhythm and cheer on Kizuna AI (a faux YouTuber) within a big concert hall. The more accurately you sync with the music, the closer you move to the stage and Kizuna AI’s performance. You can aim for a high combo for a chance to see her up close. Kizuna AI is a virtual being, with artificial intelligence. She was created to be a virtual influencer, and she has millions of subscribers on her YouTube channel. 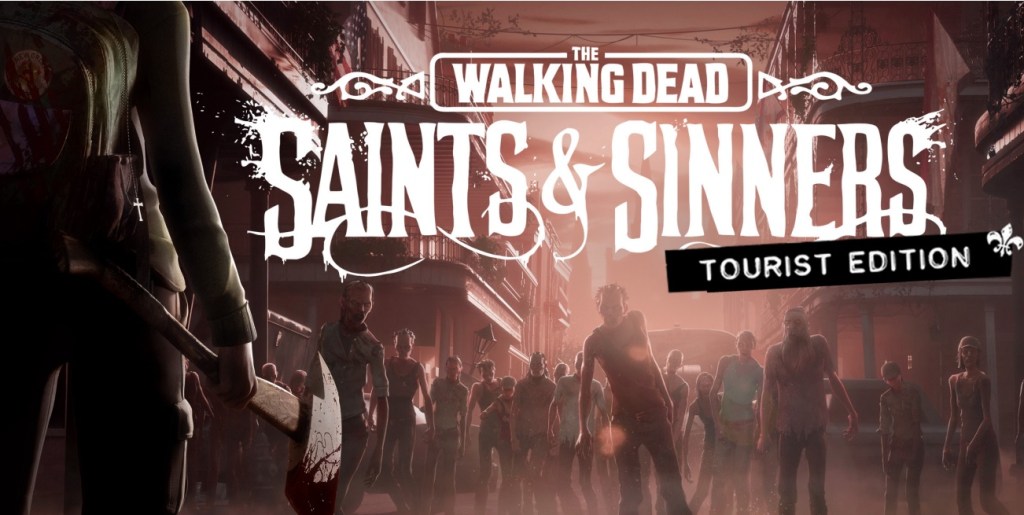 Above: The Walking Dead: Saints & Sinners

Saints & Sinners forces you to fight the undead, scavenge though the flooded ruins of New Orleans, and face choices for you and the other survivors. You’ll face off against hordes of Walkers and fight them off with guns, knives, axes, or fists.

You can ride on a magical broom in the VR racing game based on the Little Witch Academia anime. Players can fly through more than a dozen missions on a customized broom, racing against other students and purifying the ghosts of Luna Nova Witchcraft Academy. You can also explore the grounds with your fellow students in the online multiplayer Free Flight mode.

Rez Infinite is a revved-up version of the psychedelic rail-shooter adventure Rez, originally released in 2001 by Sega. Now, nearly 20 years later, a VR-only version built for Oculus Quest is aimed at a new generation. You can experience “synesthesia” as you blast through waves of enemies and bosses, with colors and sounds that sync and blend to the beat of Rez’s techno soundtrack.

May the dance be with you, as this classic Sega game comes to VR. In this game, you use dance as your power to protect the earth against invading aliens. The main character, Ulala, will navigate you through the world of Space Channel 5, where your task is to master a series of life-saving dance poses while tuning into the cool beat. The more poses you strike, the higher your viewer ratings will rise. 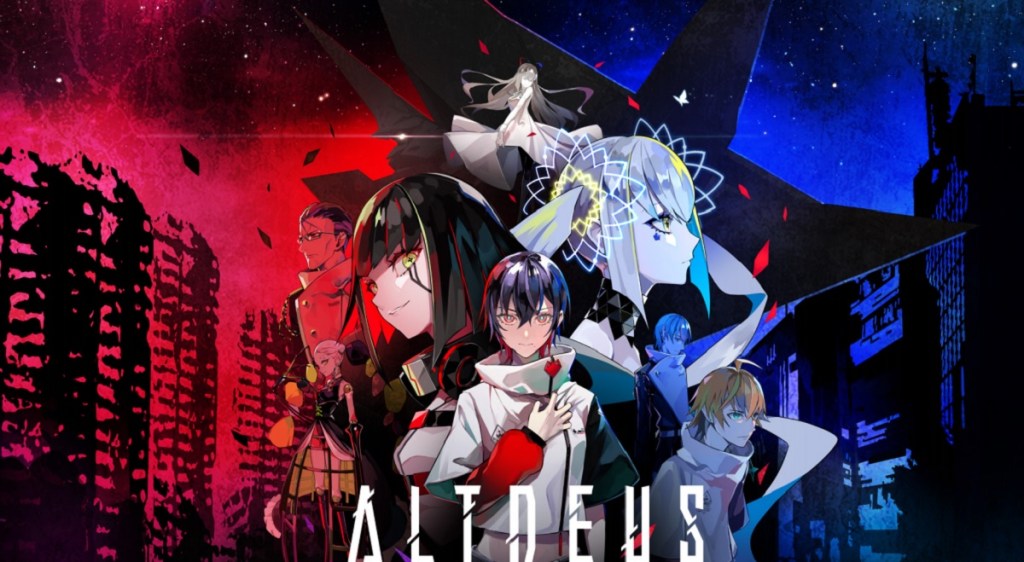 Above: Altdeus: Beyond Chronos is coming for the Oculus Quest 2.

This sci-fi visual novel pairs robot battles and pop music. It has a big branching storyline, placing you in the shoes of Chloe, a pilot in humanity’s forces fighting hostile organisms known as the Meteora. You can converse with other characters and seek clues in the adventure section. The mecha battle section is where you enter the cockpit of Makhia, the towering humanoid anti-Meteora combat weapon.

Battle Sister is a narrative-driven action shooter where the player dons the power armor and war gear of Sister Ophelia, a veteran Battle Sister. Ophelia searches for her lost twin sister.

You can fight for the Italian Resistance in a daring mission to rid World War II Sicily of the Nazi U-boat menace. It has a first-person view, a campaign, and immersive motion controls that make you feel like a sniper. This is one of a number of shooters that have migrated to VR. 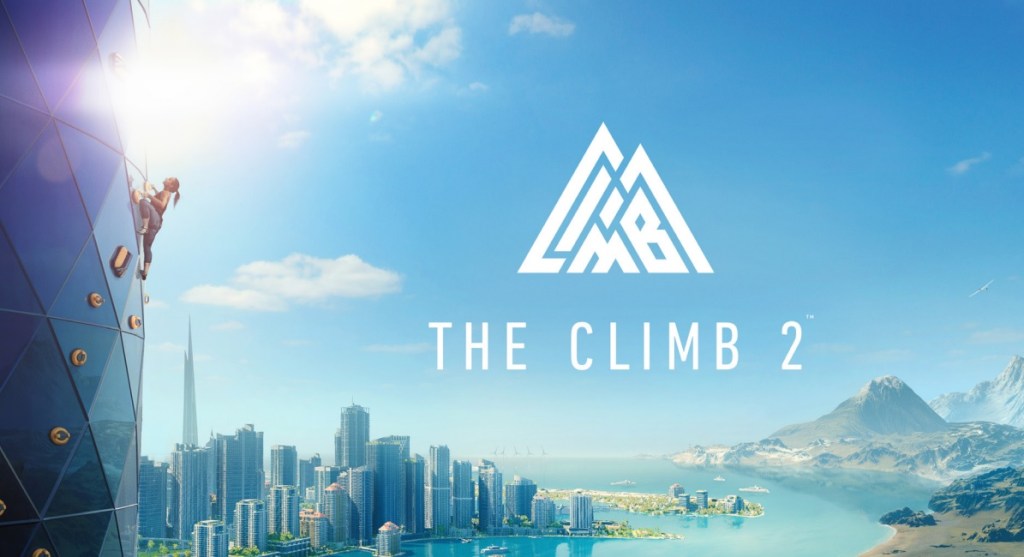 Above: The Climb 2 is back with more VR rock climbing.

Oculus and Crytek are partnering to bring The Climb 2 to Quest 2 with features like new maps, difficulty settings, and customizations. You’ll grab on to rocks with your controllers and pull yourself to the peak. The first one is a visceral experience that could give you vertigo.

This is the first action pack for Pistol Whip, one of my favorite games on the Quest where you get exercise shooting characters that run across your screen at blazing speeds. You have to survive a plague of killer machines and unravel the mystery behind their uprising. It features new scenes, weapons, enemies, and mechanics. It has five chapters in a sci-fi setting in Cinematic Campaign Mode.

You can return to Myst, an island eerily tinged with mystery and a starkly beautiful landscape shrouded in intrigue and injustice. Only your wits and imagination hold the power to unlock the betrayal of ages past. Built anew for Oculus Quest, Myst is a reimagining from the original studio of the classic puzzle adventure game with modern art, sound, interactions, and optional puzzle randomization. 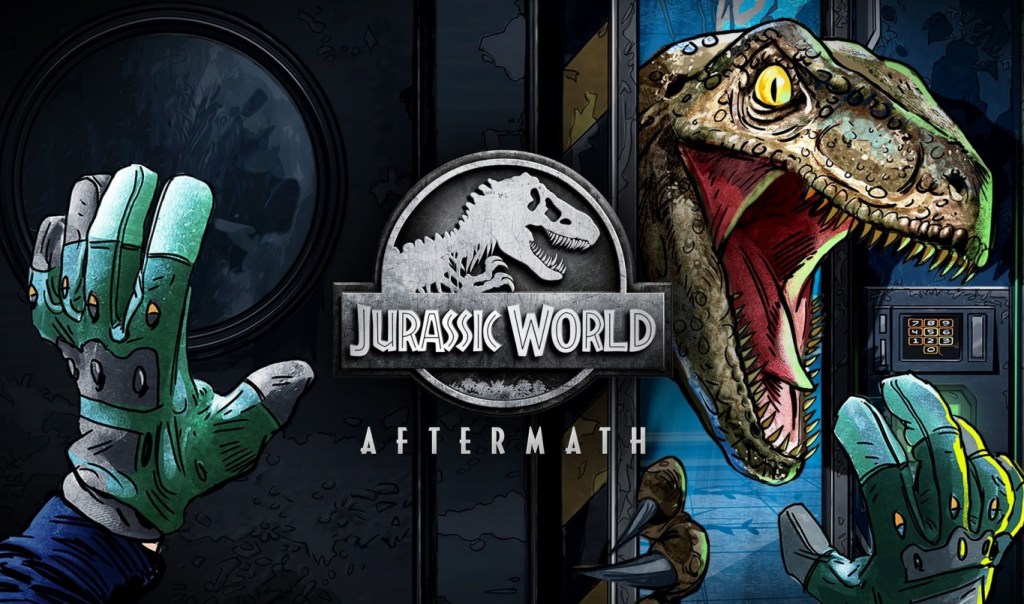 Above: Jurassic World: Aftermath is coming for the Quest 2.

This survival-VR adventure is set two years after the fall of Jurassic World. To survive and escape, you’ll need to explore, solve puzzles, and find ways to distract and hide from the ferocious velociraptors that stalk you.