Fun-to-play, simple to understand, and easily interruptible, it’s no surprise that hypercasual mobile games have topped U.S. and European charts in recent years.  Casual games — led by arcade and puzzle — were the most downloaded globally in 2019, with 82% share, according to Ad Monetization in Mobile Games: The Untapped Potential — a Facebook-commissioned study with App Annie on the global top 1,000 game apps in 2019 (March 2020).

No matter your game genre, if your goal is to maximize the revenue impact of ad monetization, it’s important to hone in on the right formats and strategies. Below, we’ve combined insights with recommendations for casual and hypercasual publishers looking to monetize with ads.

The impact of ads on the casual game experience is a net positive, according to the report mentioned above: Top casual games saw average user sessions jump +198% one-month after installing an ad SDK. And time spent increased compared to the pre-ads period (App Annie, March 2020).

And what do hypercasual players think of ads? The majority of U.S. (79%) and South Korean (85%) hypercasual players surveyed understand the value exchange of ads and are okay with seeing in-app ads, according to the August 2020 Facebook IQ-commissioned study: Genre and Great Games, in which Interpret surveyed more than 13,000 mobile gamers across 11 countries.

As far as formats go, rewarded video ads are a strong fit for casual games, and interstitials can be especially effective for hypercasual games.

Rewarded video puts players in control of their experience, offering an in-game reward for watching an ad. And it makes sense for business, too: 79% of developers said that rewarded video is their most successful format as published in Ads, IAP or Both?, Facebook-commissioned research by Walnut, based on 173 online interviews in the U.S., EMEA and APAC (May 2019). 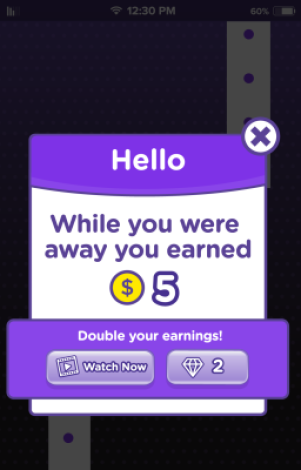 Rewarded video ads are most effective when built into your game from the start. Here are some of our favorite rewarded video implementations for casual games:

Interstitial best practices in your casual or hypercasual game

When integrating interstitials, we recommend:

Ad length and tone for casual and hypercasual

When creating ads for hypercasual games, publishers should note the following insights from Genre and Great Games.

From Rovio to Voodoo to Gogii Games, the stories of casual and hypercasual publishers show the impact of quality ad implementations for effective game monetization.

Jarkko Rajamäki, VP Advertising at Rovio, sees advertising as another way to provide more content to players and add more value to their entire gaming experience. “Player experience is always at the centre of everything we do,” he shared in Winning in Casual & Hypercasual Game Monetization, October 2018.

Thibault Leduc, Voodoo’s head of user acquisition and monetization, has observed that users are very interested in rewarded video because they want the in-game currency — whether it’s to multiply their virtual money or gain a boost at the beginning of the game (Q&A with Voodoo, June 2020).

Canadian indie publisher Gogii Games implements ads in a way that retains the positive player experience that gamers expect from its titles — and have seen a 10% increase in time spent in-app (Gogii case study, July 2019)

In short, real-life publisher success and industry data tell the same story: If you’re a casual or hypercasual publisher, there’s an opportunity to drive player experience and optimize ad revenue impact with the right ad formats and monetization strategies.