Scener has raised $2.1 million for its co-watching virtual theater platform, which lets people watch movies together remotely. The Seattle company has experienced massive growth since the onset of the pandemic, with almost half a million active Chrome installs and over 13.5 million viewer minutes per week.

During the COVID-19 crisis, Scener has rolled out support for bigger co-watching parties, which will allow viewers to watch synchronously with a live host, or a live group, over video chat. A webcam is required for video chat, and headphones are recommended. You can also engage in video, audio, and text chat.

Scener said the money would help it scale from a co-watching tool to a global community platform. It will enable creators to curate, host, and share watch parties for up to a million audience participants. As an example, a comedian could give a continuous monologue as everyone in the audience watches in real time.

“We’ve been seeing an uptake around the world,” Joe Braidwood, chief operating officer at Scener, said in an interview with VentureBeat. 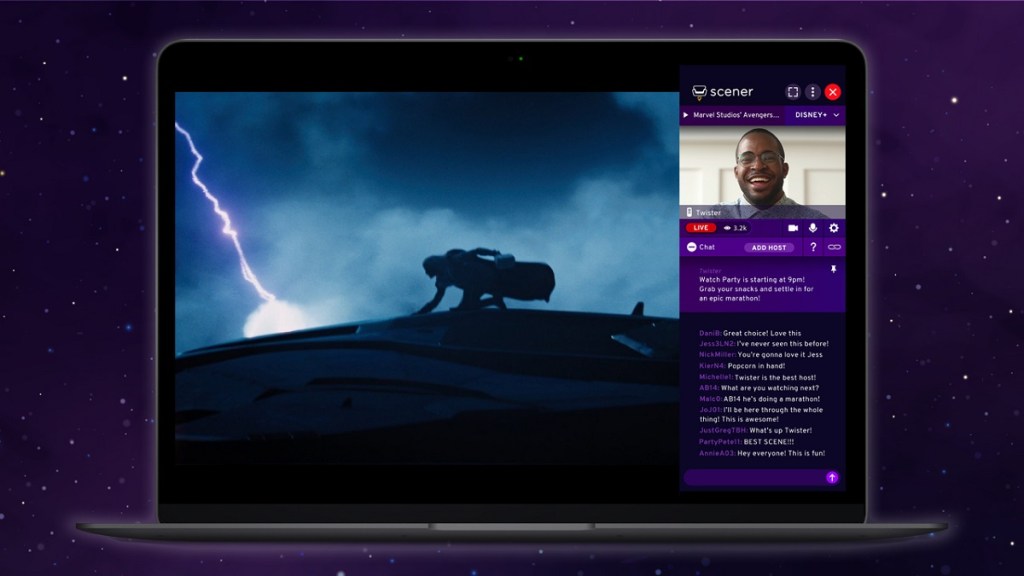 Above: You can video chat with your friends while watching movies on Scener.

Scener will use the funding to accelerate product development for its social platform and further develop its events and community of watch party hosts, with the goal of creating a nightly destination for collective entertainment viewing. The tech wasn’t easy to get right.

The majority of users are engaging with each other on video chat, Braidwood said. 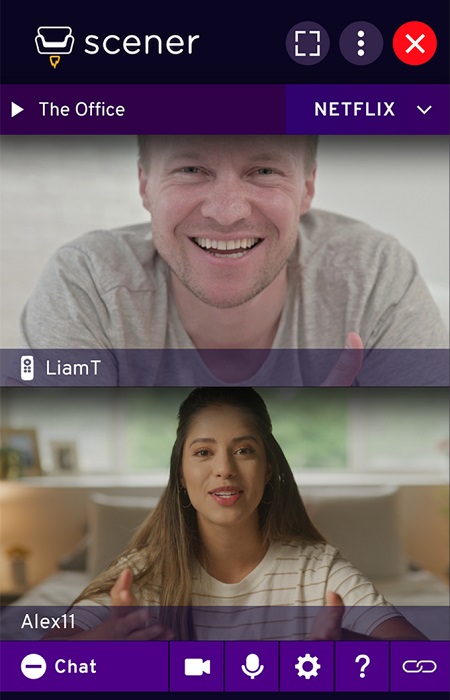 Above: You can do private chats with friends on Scener.

Creators can set up a profile at Scener.com to host public or private watch parties. Scener’s virtual theaters can theoretically hold up to 1 million viewers with live video chat and interactive messaging features running over synchronized playback of the streaming content.

During October, Scener is debuting its watch party series Stream & Scream, which will bring Halloween celebrants together to enjoy horror movies together. The programming will feature a slate of watch parties including the premiere of The Haunting of Bly Manor with an unannounced, surprise guest from the cast; Anna and the Apocalypse with actress Sarah Swire; Scary Stories to Tell in the Dark with actor Gabriel Rush; and a live lockdown horror movie as part of this year’s Raindance Festival, In The Shadows It Waits, by writer-director Michael Beets.

“Because of our unique position as being a video chat or co-watching platform that works across all the different services, I can watch your face and laugh when something gross happens,” Braidwood said. “When there are jump scares, we can all get excited. I’m looking forward to being terrified.”

RiffTrax is partnering with Scener to show its comedic live Riff commentary synchronized with movies on the major streaming services. Martin said RiffTrax has waited 14 years for this “perfect sync” technology to exist in a watch party environment.

“They did a big test where 1,000 people showed up to test out a version of the software that is just rolling out,” Braidwood said. “It’s a really amazing experience where you have these comedians who have these performances that they’re doing live over video chat. They are designed to be synchronized in the movie. And that’s obviously something that the Scener platform makes possible now.”

Scener debuted with Netflix and now supports over 10 major streaming services, including Disney Plus, Prime Video, Alamo On Demand, Hulu, and YouTube. Braidwood said he can’t talk about any living room deals yet, but the company would love to work with parties such as Roku or Apple TV.

“We also rolled out this week a big update to the product, which brings social profiles and scheduled events to the core of the user experience, as well as extending support to over 10 services,” Braidwood said.

The company has five employees and it first rolled out in 2018, after being incubated by media streaming pioneer RealNetworks. The service is free for now and Braidwood said that the company would reveal monetization after it grows to a larger scale. Justin Kan, the founder of Twitch, has become an adviser for the company.

Rivals include Netflix Party and Hearo.Live. Streaming services like Disney+, Hulu, and Prime Video are expected to add their own native group-watching features as well. “What’s different right now is that the pandemic is here, and we see ourselves fitting in as a horizontal solution that can go across the services,” Braidwood said.