BigBox VR’s Population: One is a virtual reality game that breaks new ground as a battle royale first-person shooter. I played the game in a preview session on the Oculus Quest 2 VR headset.

While I found it to be fun, I got a bit seasick from the motion, which isn’t for the faint of heart. VR games always carry some risk as roughly half the population can get motion sickness while playing them. The developers have taken care to craft it in a way to minimize that wooziness, but you can only do so much in an action game in VR.

In this game, 18 players compete on a map that gets smaller and smaller over time. They battle it out to be the final surviving squad in six teams of three people each. It’s a battle royale game in VR, though it’s similar to other titles like Fortnite, PUBG, or Call of Duty: Warzone. What makes this game groundbreaking is the way it has handles vertical combat.

The game debuts October 22 on the Oculus Quest, Quest 2, Oculus Rift, HTC Vive, Windows MR, and Valve Index for $30. (Here’s my interview with the developers).

Getting used to it

I’m not sure whether I’ll get used to the game by playing it more. I did that with Halo on the Xbox two decades ago, and I’m fine while playing shooters on consoles today. But in Population: One, you often have to jump off buildings and fly downward at high speeds to evade the enemies. That may be one of the things that makes me sick.

CEO Chia Chin Lee said in an interview with GamesBeat that the team took care to design the game for those who can’t tolerate much motion, but there were some tradeoffs. If you enable people to teleport across the map, rather than run or walk across it, that solves the motion sickness. But Lee said that for hardcore gamers, it makes aiming and hitting enemies nearly impossible. It’s a lot easier to hit someone running across a map at a distance than it is to take down someone who magically leaps from point to point.

Still, the team created three settings that provide for varying levels of comfort. They found, for instance, that jumping off of a building or falling off one can make people woozy. So these settings can narrow your field of view so that you don’t see so much of the landscape rushing by when you are in the air. Of course, if you jump off a building in order to shoot at someone while you are flying, that narrow field of view doesn’t help. 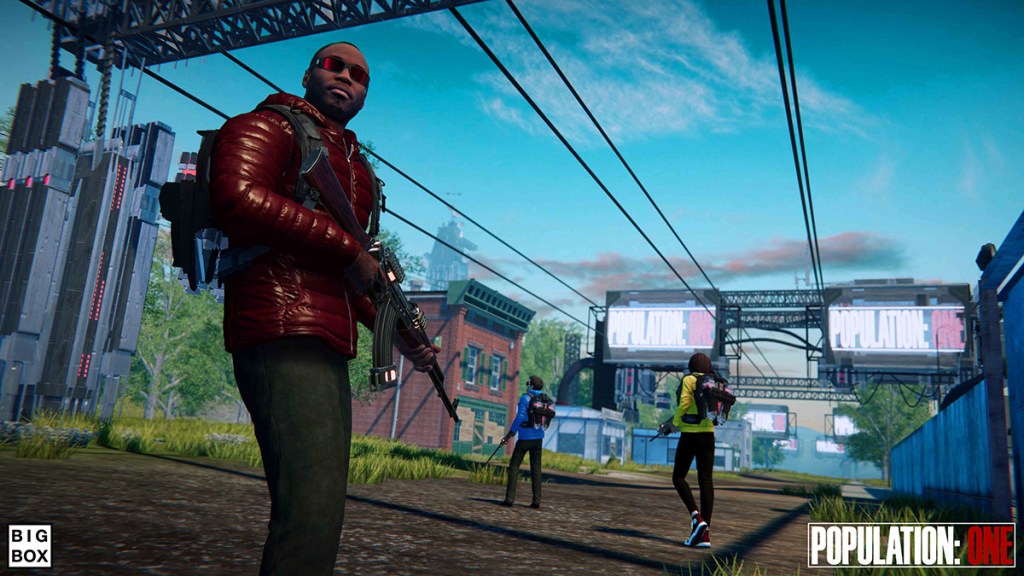 Above: The lobby for Population: One.

I played in a special press battle with the developers. One of them showed me how to play, but you learn the basics in a short tutorial. Like with other VR shooter games, the mechanics are visceral, and they require you to mimic motions in the real world. To reload a gun, for instance, you have to slide a magazine into the gun using your hand with a hand controller. Then you pull back on a level to load a bullet into the chamber, and you shoot the gun by pulling back on the right trigger.

All of that takes time. You can’t shoot and reload nearly as fast in VR as you can using a console controller or mouse and keyboard. That slowness makes you vulnerable out in the field. But the good thing is that every player has that handicap. So if you can get used to doing it all more quickly, you can be as fast as your enemies.

You also use similar motions to do things like healing your teammates using a defibrillator or yourself by peeling and eating a banana (where you have to pull back the banana skin four times). You snap open a can of soda and then drink it by holding the can up to your face. And like in Fortnite, you can automatically create a barrier that can protect you from getting shot. This metal barrier can help you across obstacles, like a chasm between two buildings, or you can stack the metal vertically to protect yourself from being shot, as if you were building a fence.

You have to get used to these things in order to function well in this game. When you use one of the sniper rifles, you have to line up two circles and a red dot in the middle, so that your aim is perfect in VR. When the dot lines up inside one circle inside another circle, then you can fire and hit your target. In a 2D game, you don’t have to go to all of that trouble of lining up a shot. 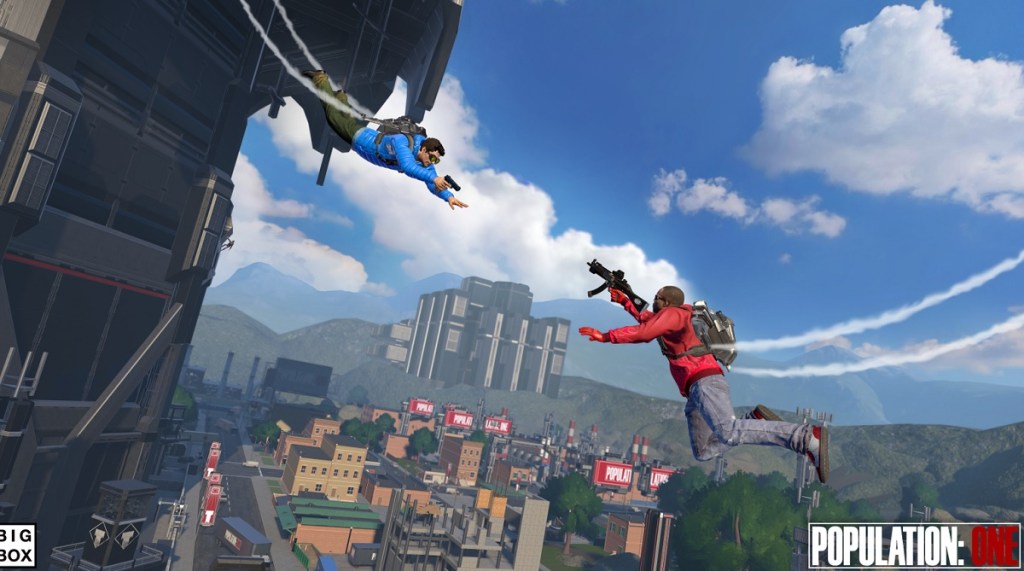 Above: Population: One is a vertical combat battle royale game in VR.

One of the novel things about Population: One is the vertical combat. You can climb any building or structure by simply going up to it, putting your hand out, and then making a climbing gesture while holding down a trigger. You let go with one hand and then do the same with the other hand. This lets you ascend a wall and get to the top of a building pretty quickly.

Once you are on top, you can use the vantage point to shoot down on enemies or scan the horizon. You can also jump off and start flying. If you step off a building, you will fall downward. I did this once and you can get sick from it. But if you put your arms out while holding the controllers, you will fly downward as if you are wearing a wingsuit (you’re not). You can glide to another building or fall on top of some enemies and take them by surprise.

As I went into my matches, I was surprised to see how these tactics could be put into practice. One squad was heading toward a loot crate that had dropped into an area of the map. The crate has better guns, so it’s a good thing to run after. But another enemy was watching the crate from a spot high above the battle. When the other team got close, the enemy dove down like a dive bomber and started shooting. The enemy missed the target, but it was pretty cool to watch.

My teammate also dove in at some enemies during the final moments of a match, as the playing circle was getting smaller and smaller. But she got shot out of the sky by a sharpshooter as she did so. 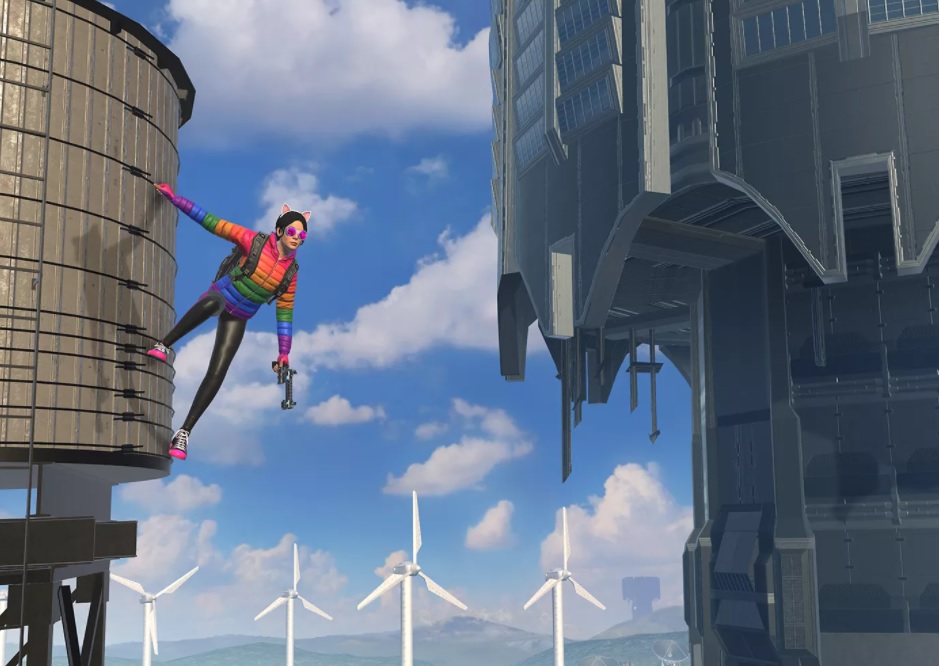 Above: You can climb on any surface in Population: One.

Most matches last only about eight minutes, which is something that helps with getting motion sickness. They’re shorter than traditional VR matches, mostly in the name of comfort. You start on a platform high above the kilometer-square battlefield. You run out to some pods that take you across the battlefield to a point where you can jump out and dive down. Your team can mark a spot for you to land.

You fly downward, and once you’re on the ground, you start looting or picking up everything you can, just as in other battle royale games. You load up on health, ammo, weapons, and other things that can help you. I had a bad habit of doing things out in the open, like peeling a banana while standing in a field. That’s the kind of thing that can get you killed.

But I moved faster once I got the hang of it. I grabbed an assault rifle and was able to shoot down an enemy in my first match. So I was happy about that. I started getting shot at and so I ran for cover and managed to avoid death for a little while. But soon enough, an enemy team rushed our whole squad and we were taken out.

Then we were able to watch others play, which was fun. In other games, you often see the spectator view from the point of view of another player in the first-person mode. But in Population: One, you can rise above the battlefield and view the action from a bird’s eye view. You can see the tactics being used and learn how to play better. I’s a clever way to teach people the game faster, as you know what you should have done when another team is attacking you head-on. Almost always, the answer is to engage in vertical play.

The quality of the art 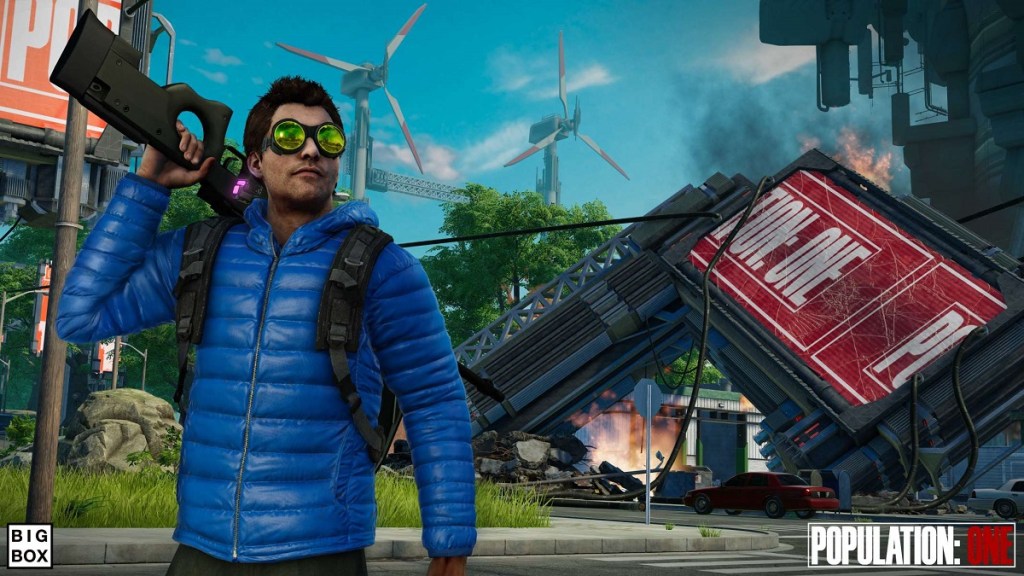 Above: The matches are pretty quick in Population: One.

The visuals on the Oculus Quest 2 aren’t bad, but they aren’t spectacular compared to games like Warzone. That’s because the games are built so they can run across platforms, on everything including the Oculus Quest, Quest 2, Oculus Rift, HTC Vive, Windows MR, and Valve Index. To get a sufficient audience, BigBox VR needs to enable as many platforms to play together as possible.

But that means there are tradeoffs when it comes to how good the art looks. The game is supposed to look hyperrealistic, but it doesn’t meet that target most of the time. But I didn’t mind that. I wasn’t there to admire the art. I was there to shoot other players. And it was done well enough so that I could do that and lose myself in the immersive simulation.

While the game has a lot of tradeoffs for the reasons I’ve pointed out, I think it does get to a core level of fun. If you can overcome these tradeoffs and become skillful at the game, I think you’ll enjoy the added dimension that the vertical combat gives you. I hope to play this game more and figure out if I can get over the motion sickness. It might be worth it, but I hope I don’t barf my way to success.