The game industry has seen an estimated $20.5 billion in acquisitions, investments, and IPOs in the first nine months of the year, according to game investment tracking firm InvestGame.

This figure points to the huge amount of activity that has occurred as gameplay surges during the pandemic. The data comes from InvestGame, which is run by investment specialist Sergei Evdokimov and Anton Gorodetsky. (They both work at My.Games, but the company doesn’t produce the report.) While the firm hasn’t tracked past years, the current figures show a stunning amount of investor activity in games while other sectors of the economy are falling apart.

InvestGame tracks deals among game developers, publishers, platform and tech companies, esports, hardware, retail, outsourcing, and other related areas. But it doesn’t including gambling companies in its definition of games. The data also only covers estimates of publicly announced and closed deals in the game industry. Deals in which the amounts aren’t disclosed are either estimated or not included. The numbers are estimates of the total value of tracked deals, and these numbers don’t include the biggest deal: Microsoft’s purchase of ZeniMax for $7.5 billion, which has not closed, Evdokimov said in an interview with GamesBeat.

“We track all the pieces of information in the market,” he said. “You see the numbers show it’s very huge and growing, and it’s very active. Our mission is to provide the data for investors.”

While the pandemic has devastated many industries, gaming has benefited from people being stuck at home with nothing to do. They have watched a lot of Netflix, but they have also played a lot of online and mobile games. As investors saw this happening, they initiated a lot of deal-making. The deals slowed in May as investors adjusted to making deals while sheltered in place. But the activity picked up again in June and saw big spikes as Microsoft bought Bethesda and Unity went public in an IPO. 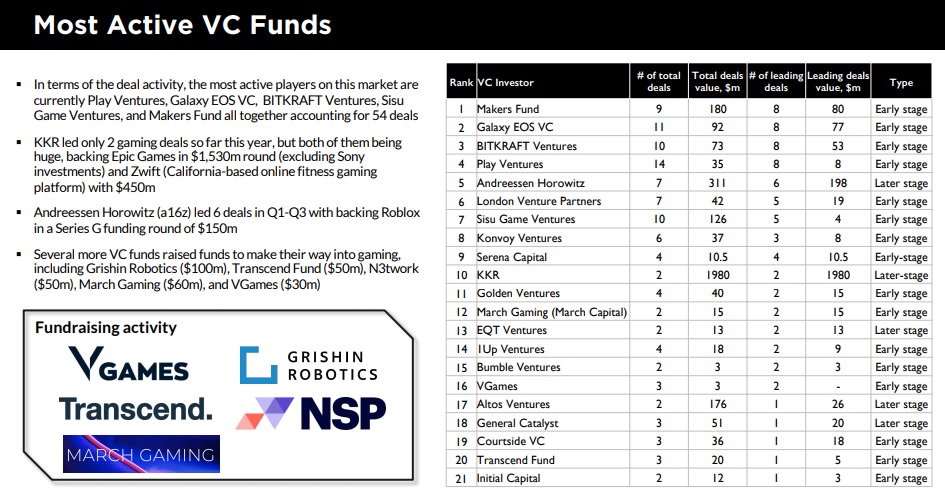 Above: The most active game-focused VC funds.

In particular, private investment activity significantly dropped in the wake of the COVID-19 outbreak in May but started gradually recovering afterward, both in terms of the number of deals and in terms of combined value.

During the first nine months, game developers and publishers have poured $2.7 billion into the gaming market, with 100 transactions closed. That includes 69 closed preseed deals (for the earliest startups), seed, and series A rounds (first institutional investor rounds). Also among these transactions were nine closed series B or later rounds and 22 corporate investments.

While U.S. companies dominated the activity with 90% of the total value at the later stage and corporate rounds, only 30% of early-stage VC funds have been raised by U.S. startups.

The most active category in the number of deals is mobile, with 34 announced deals and $103 million raised. The biggest deal in this category was Nifty Games, which raised $12 million from March Capital Partners and others. Mobile gaming remains a fragmented market, and average investment amounts range from $3 million for seed investments to $6 million for series A rounds.

Roughly 50% of early-stage VC funds are putting money into multiplatform games. One big outlier is Playco, which raised $100 million at a $1 billion valuation to make instant games. Other big investments included Russia’s 110 Industries raising $20 million and ArtCraft Entertainment raising $11.7 million to finish the online game Crowfall. The most active VC fund was Makers Fund, but the activity extends well beyond any single investor.

“It shows a lot of people around the world believe in gaming,” Evdokimov said. 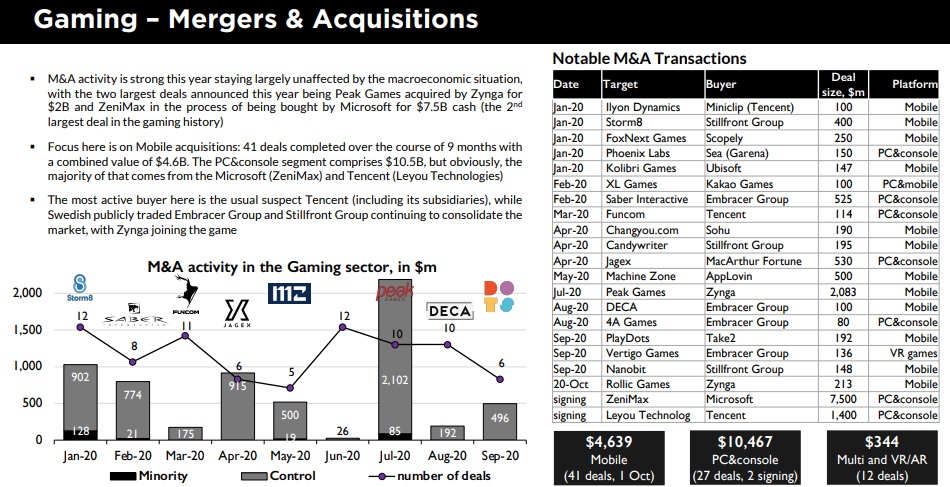 Tencent has been the most active buyer, but another active company is Sweden’s publicly traded Embracer Group (THQ Nordic is one of its labels), as well as the Stilfront Group. AppLovin bought Machine Zone for $500 million. In multiplatform and VR/AR games, 12 deals occurred at a combined value of $344 million.

The most active acquirers are Microsoft, Zynga, and Tencent. Embracer Group led 11 acquisition deals, with the largest one being the purchase of Saber Interactive for $525 million. The most active strategic investors are Tencent, MTG, My.Games, Supercell, Kakao Games, and AppLovin.

“The most interesting thing is that COVID did not slow down M&A at all,” Evdokimov said. “At the same time, the number of early-stage and late-stage VC deals did drop significantly. And then there was a huge amount of capital inflow into gaming from the public markets.”

Public market activity stopped during the January through May time frame as the pandemic sent public markets into shock. During that time, Stillfront and Embracer raised money through PIPE deals (private investment in public equities), where private investors put money into publicly traded companies.

Unity Technologies raised $1.3 billion at a $13.6 billion valuation in mid-September. The stock is valued at $21.8 billion now, which bodes well for more game IPOs. But Unity is not included in the public offering total, as it is a tech platform.

Skillz has yet to complete its deal, but the skill-based gaming company is going public through a special purpose acquisition company (SPAC) at a $3.5 billion valuation.

Evdokimov said his firm is looking back at historical information to get year-over-year data.