Game monetization firm Beamable has filed for Chapter 11 bankruptcy protection this week, but in an interview, CEO Jon Radoff said the company still plans to operate. Radoff said the company hopes to go through a quick bankruptcy process and clean up its balance sheet so it can continue its work handling server and monetization tasks for game developers.

“We are not shutting down,” he said in an interview with GamesBeat. “We are keeping our employees and last month was the best month we had as Beamable.”

The Framingham, Massachusetts-based Beamable, formerly known as Disruptor Beam, filed in U.S. Bankruptcy Court in Worcester, Massachusetts, saying it had $3.4 million in liabilities and $637,987 in assets. The creditors include a venture fund that is owed $1 million; Silicon Valley Bank, which processed the company’s Paycheck Protection Program payments and is owed $900,000; and equipment finance firms owed $920,000. 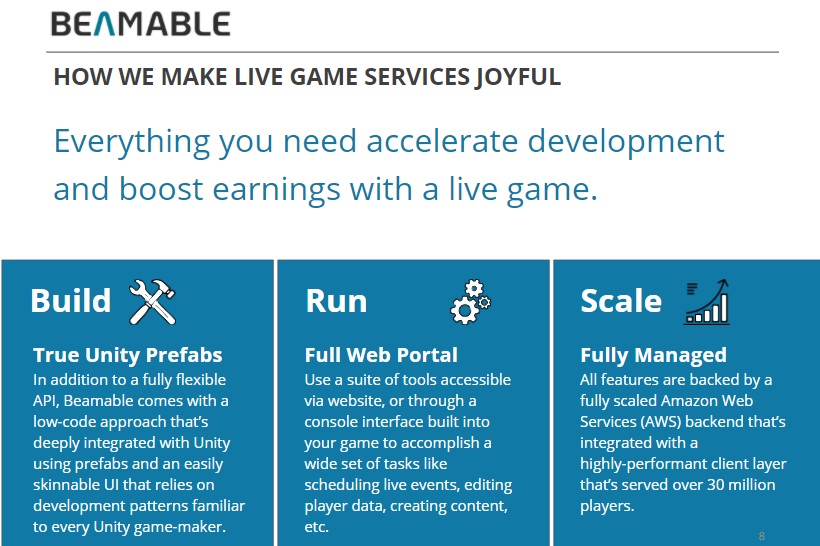 As Disruptor Beam, the company made games based on TV shows such as Game of Thrones, The Walking Dead, and Star Trek. It sold off Star Trek: Timelines to Tilting Point in May. At that time, 19 of Disruptor Beam’s employees went to work for Tilting Point. And about 14 stayed with Disruptor Beam, which pivoted as Beamable with a focus on monetization and server tasks. About 10 people were laid off in the transition.

“The $3 million-plus in liabilities is a lot of liabilities to carry on the balance sheet of a company that is rebooting,” Radoff said. “The reality of Disruptor Beam was that we built some great games, but we weren’t really able to turn that into a sustainable business where we could crank out hit after hit. But we did create this very valuable technology platform along the way. We will clean up the balance sheet, and then compete like any other startup.”

Radoff said the company is seeking to reorganize under the new Subchapter V of the Chapter 11 law, which enables companies to emerge from bankruptcy more quickly. As a result of the COVID-19 pandemic, the CARES act expanded the Small Business Reorganization Act (SBRA) to include companies such as Beamable.

Under the process of a Subchapter V restructuring, the court appoints a trustee. Beamable will work with the trustee and remaining creditors to propose a restructuring plan, Radoff said. This will provide for a streamlined and efficient process that will minimize distraction to the business and permit the employees to focus on providing service to customers, Radoff said.

He said the company has the support of its investors, but he noted that having a clean balance sheet will help position it as a startup that could, in the future, once again raise some money.

“The last thing our investors wanted was a messy balance sheet,” Radoff said. “We hope to get through this in a short time. We’re keeping our employees. We think this is in everybody’s collective interest.”

Radoff said Star Trek: Timelines uses Beamable, as does East Side Games’ Archer: Danger Phone. He said new customers are signing up at about a rate of one per day for the company’s software-as-a-service subscription. Beamable works with Unity’s game engine. It competes with Microsoft’s PlayFab, GameSparks, and Heroic Labs.

“We see our service as like a Unity game engine for the server,” Radoff said. “We handle the social and the monetization, making that easier for developers. And people really like what we are doing.”