This week, The Secret of Monkey Island turned 30 years old. Monkey Island is one of my favorite video game series, and Secret is the one that started the beautiful franchise.

The Monkey Island games are point-and-click adventures. They focus on exploration and puzzle-solving, and you navigate your character, the wannabe pirate Guybrush Threepwood, by pointing and clicking around the world. This is a style of game LucasArts helped make famous back in the day, especially in the ’90s.

The Secret of Monkey Island is also funny. Man, is it funny. Dialogue is a big part of the experience. The islands you explore host an assortment of amusing characters — like used-boat salesman Stan and a random grog-swilling pirate that is hawking another LucasArts game, Loom. Talking with them is crucial to solving puzzles and advancing the narrative. Guybrush is a constant chatterbox, even when he’s not conversing with anyone, as he can offer commentary and observations on the environment around you if you spend your time clicking every corner of every area. Its success helped establish LucasArts as an adventure game powerhouse, a field that Sierra Online dominated with hit franchises like King’s Quest and Space Quest.

I came across The Secret of Monkey Island in a roundabout way. Day of the Tentacle was my first LucasArts adventure. I picked it up from a local game store randomly because I liked the box art. I fell in love, and I soon discovered the demo for The Curse of Monkey Island, the third entry in the series. After playing that masterpiece, I went back and played the first two games.

And I could happily play all of them again right now. You’d think that such narrative-focused games wouldn’t lend themselves to repeat playthroughs, but the Monkey Island titles are clever and amusing enough that I’m happy to experience them again every few years or so. 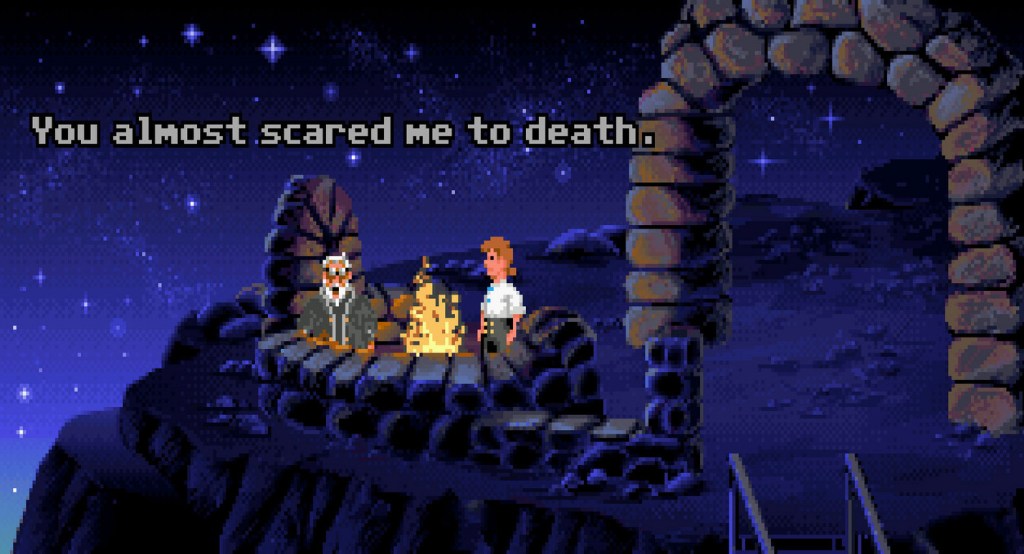 Above: I love those pixels.

It’s easy to do this for the first two Monkey Island games, thanks to the spectacular special editions that we got in 2009. These redid the original graphics, spruced up the music, and added voice acting. At the time, I thought it was neat to see these classics with new art and, you know, actual voice work. Now, I’m happier playing the original versions. Those sprites may be old, but I still find them beautiful.

Thankfully, the special editions include the original takes of each game. You can even switch between the two with the press of a button. You can find the Monkey Island special editions on Steam, each going for $10.

I may use this anniversary as an excuse to replay The Secret of Monkey Island. Heck, I may go on and replay the entire series.

In the coming weeks, I may have a story or two that should offer some details about the The Secret of Monkey Island’s development and history. Today, I just want to raise a glass of grog to one of the greatest games ever made.