Esports was probably not on the original list of things that will keep daily fantasy sports sites profitable in 2020, but the meteoric success of DFS in pro gaming is one of the rare sports success stories during the pandemic.

Despite DraftKings offering it as a game as early as 2015 and FanDuel providing the first legal and online esports betting platform late last year, there really wasn’t an initial push to draw a large audience. Prize pools remained below the low five-digits, and many sites didn’t offer any esports fantasy games, let alone DFS. For years esports daily fantasy was hardly a blip on the DFS radar.

But the vacuum of traditional sports caused by the pandemic led to a drastic shift in priority, and esports became an area of interest for DFS grinders in need of something to play. Thanks to the accessibility from the internet and the quick movement from established leagues such as the League of Legends Champions Korea (LCK) and the League of Legends Pro League (LPL) in China, the continuation of competitive esports went on without the near catastrophic interruption in other sports. Led by the popularity and stability of League of Legends, the biggest

DFS sites created games to satisfy the demand with contests in Counter Strike: Global Offensive, Call of Duty, and Rocket League. While basketball and driving attempted to continue operations and curate attention to its product with players playing out games or races through video games, its efforts were quickly dashed due to low viewership and participation from DFS or betting.

Contests for esports, and especially League of Legends, expanded to up to 8,000 players with increased prize pools and winners taking home $25,000 to $100,000. Call of Duty and Counter Strike: Global Offensive also found modest success due to its understandable competitive structure and similarity to other team-oriented sports. The demand was there, and the player base grew from almost exclusively esports fans to a more general user base. 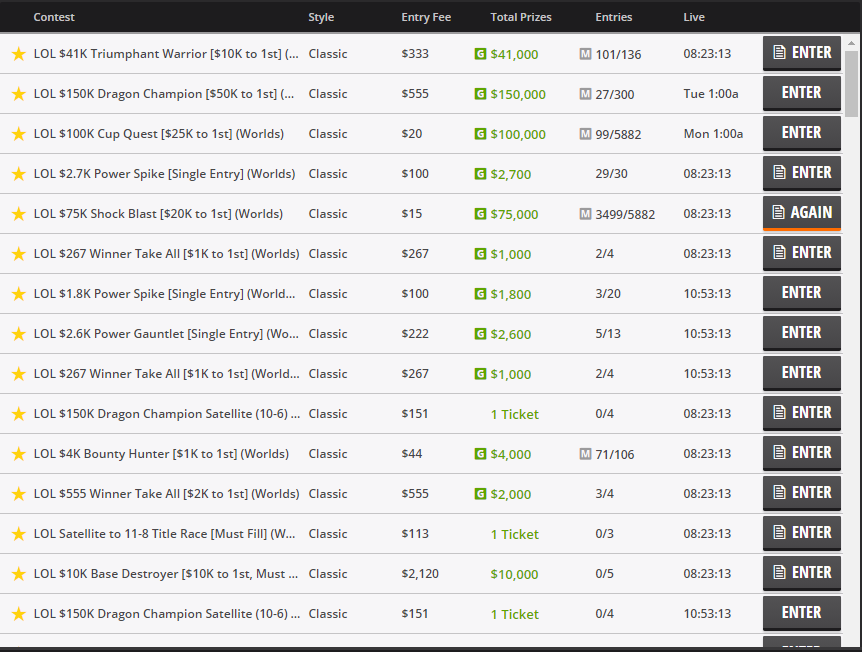 When Alex “Awesemo” Baker entered the picture as a player and enthusiast for League of Legends DFS, it helped legitimize the appeal of esports in DFS. Awesemo is the No. 1-ranked  overall DFS player, according to Rotogrinders, and is the cofounder of Awesemo.com, one of the premier websites for articles on sports slate breakdowns and assistance toward success in DFS. For esports to be featured alongside traditional sports juggernauts such as basketball, football, or baseball, it needs credibility from a high-profile player base like Awesomo.

“A lot of people have genuinely enjoyed the fantasy aspect of it, and it has a real feature in fantasy,” Baker said. “There are a lot of advantages with fantasy LoL because you can build it very far in advance — it’s a huge difference to something like soccer because you have a bigger window. The other advantage is the best teams are usually in Korea or China and the time difference allows it to be a contest you enter by itself because there is no direct competition during that [time]frame.”

When he first played esports DFS back in 2015, there was no available software to create projection models or lineup builders, and the small size of contests made a return of investment a negative pursuit. But, with the necessity and growing interest caused by the pandemic, pro gaming is now in the spotlight. Awesemo attributes the success of a game like fantasy LoL to its simplicity and similarity to other established sports. He mentions how the option of stacking (choosing players from the same team) and LoL being a team-oriented game lowered the need to extensively research individual players and histories. The learning curve for esports, especially in a team format, is not terribly difficult.

“It’s about the demand to play fantasy League of Legends and it’s affected by other sporting events. There are enough people that try it out and enjoy it that there should be some repeat customers,” Baker said. “It will be smaller when other daily sports come back, but LoL really shines over the weekends. Timing is always everything.”

Cameron MacMillan, COO for Better Collective Tennessee LLC, is one of the founders of Rotogrinders.com and saw the explosion of esports as an eventuality.

“There was a lot of hype and I think people just want esports to happen. DFS, at that time, didn’t work. It’s a social experience for traditional sports and there isn’t a place for that in esports,” McMillan said.

Better Collective Tennessee was one of the first companies that invested in fantasy esports, around 2015, with stakes in Comicbook.com and an attempt to create a side-site dedicated to news and articles around the DFS aspect of esports. With the new demand for esports knowledge, Rotogrinders now offers esports content, with many of its writers and contributors shifting focus away from their main sport to cover something they never really played or watched.

“The audience was young and growing, and DFS extended more to the 18-45 age group with esports not near the end of that range. But it’s clearly something people want and it’s not going away. People continue to try to start companies in it and it’s just a cultural thing and the young generation will push through, but it’s just not there yet,” McMilan said.

Despite the growing audience, McMilan points out there is still a lot of room for the scene to become a staple with fantasy players. Prize pools and contests sizes are much larger than before and there are more promotions and free contests than ever before,, but there still exists a disconnect toward a full commitment on the level of traditional sports. There will be slates that boast a healthy 8,000 player pool with a $50,000 top prize and then fall under 6,000 people with only a $25,000 top prize the night after, despite little change to the amount of games available for the contests.

Even with the inconsistencies, the infrastructure is working and the future for esports will only grow as betting becomes legal in more states.

“Now that there is an infrastructure in place, there should be a future in esports betting and in DFS. Many of the states in the USA will have sports betting legalized,” McMillan said. “A state like New Jersey that handles the most sports betting revenue has a clause that prohibits esports betting, because of concerns with the legality in esports. Esports needs a governing body like the bigger sports that come together such as the MLB association, so it can be safe on a case-by-case basis. There is an ability to bet on esports in Europe and the USA will have it if it continues to gain traction. DraftKings is a good barometer of interest, with prize pools that compare to even NBA contests.”

Ben “Fishstix” Goldhaber, part of the founding team of Amazon-owned Twitch, and cofounder of esports streaming site Juked.gg, agrees that the marriage between DFS or betting and esports can only be a boon. It’s a cash infusion for both sides, whether it comes via attention from a new audience or sponsorships supporting tournaments. There may be concerns over esports’ checkered past with match-fixing and scandals, but with more publishers and companies involved, more checks-and-balances and ethical standards should follow.

“A lot of people will have mixed opinions with thoughts of gambling addiction or match-fixing concerns, but generally this is a digital-focused audience, highly educated, and wealthier than the average internet user,” Goldhaber said. “There is a real opportunity to drive interest and revenue. There are still some moral concerns, and people’s opinions will not change overnight, but the tide is shifting.”

Fishstix disagrees with the popular narrative that esports viewership is increasing because of the delay of other sports and production grinding to a halt. While the most popular games like LoL or emerging games such as Valorant were gaining viewership, many communities that rely on a live audience or events ceded production or relied on smaller online competitions to keep its schedule running. Fishstix pointed out that the stoppage of smaller games and communities made for an overall drop in viewership.

The lack of a live audience takes away from the experience that makes esports so special. Despite the lower overall viewership compared to traditional sports, the most popular leagues with DFS backing are on the rise. It didn’t matter the time of day; players will always watch a product with something on the line. The most popular leagues in DFS contests, the LCK and the LPL, experienced unprecedented rise in viewership. Five of the most-viewed streams in the history of the LPL came in the past three months. June’s average viewers were the highest ever for the league. The grinders are becoming believers in the games.

“Esports LoL is a fun experience. It does not need to be mainstream; it just needs to have their esports fans because there are so many of them,” Baker said. “I watched a broadcast and saw around 160,000 and even if a small percentage of them played contests, that would be enough.”