Drops made a game out of language learning, and it’s paying off. The company said it has hit 25 million users and reached a revenue run rate of $10 million.

This year, the Tallinn, Estonia-based company has seen an increase of 7.5 million users. It is forecasted to hit 30 million in total by the end of the year, CEO Daniel Farkas said in an interview with GamesBeat. And 2020 revenue should reach $10 million, up 13 times from $719,000 in 2017.

“The biggest advantage is that Drops is a game, not a gamified language course,” said Farkas. “The core experience is a proper game. Gamification gives you external motivation with rewards. The immersive game experience is internal, or intrinsic.”

The app has 5 minute sessions where you can answer drill questions by swiping in a direction on a smartphone. Vocabulary questions are read out loud, and you have to answer within a time limit. The app recognizes your voice when you answer questions. I played around with it, and it was pretty easy to use. Drops has about 15 minigames. 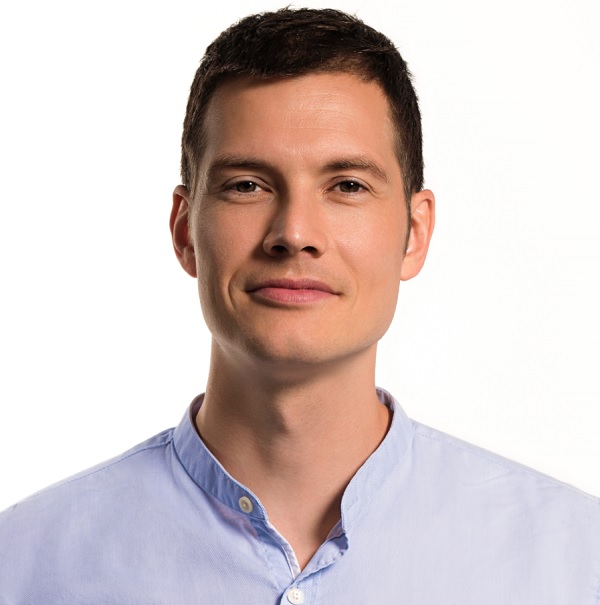 Above: Daniel Farkas is CEO of Drops.

It’s been a long journey for Farkas and cofounder Mark Szulyovszky, who started the company in 2012.

Farkas is from Hungary. He learned English and then Spanish and found he enjoyed deconstructing languages.

“I realized that you need to pick up languages in order to have a decent shot at the global marketplace,” he said. “I realized that the foundations of language learning are the core vocabulary and building consistency. Language learning is a marathon, not a sprint. You get confidence by learning the building blocks. I couldn’t find a really good tool to build these foundations.”

So Farkas and Szulyovszky began working on a solution and entered an accelerator for Estonian startups. Mentors for the program came from game companies such as Supercell and Rovio. “They were quite an inspiration,” Farkas said.

The duo spent 18 months on an app they called Learning Visible. It didn’t work.

“The retention was not there,” Farkas said. “It wasn’t sticky enough. People were not using it on a daily basis. We worked on it for one-and-a-half years, and we pulled the plug.”

They started again from scratch. This time, they borrowed from gaming by making the lessons just 5 minutes a day, about the same amount of time people play mobile games like Supercell’s Clash of Clans. They built Drops within six months. After they debuted the game in 2015, Apple featured it in China and it began taking off.

Drops netted more than 900,000 downloads in its first year. It kept growing, and an Android app followed in 2017. The company has grown to include 23 people, mostly scattered around Europe, while Farkas remains in Hungary. The company still hasn’t raised any money.

Drops is free to use for 5 minutes a day. But you can buy the premium app on iOS and Android for $8.50 a month with no time limit. The average user spends about 7 minutes a day on Drops. “The limited time makes you really focused on learning,” Farkas said.

Drops now offers 42 languages, and it has been adding around seven languages a year. Drops has also evolved from a single app to a language learning platform spanning mobile and web-based programs. And it has launched Scripts, which teaches learners how to read and write new alphabet and character-based writing systems, and Droplets, which teaches foreign languages to kids ages 8 to 17.

“We’re the ones that focus on being a game, and that’s why we’re growing,” Farkas said.