Pack-in games aren’t the norm for new console launches these days, but every PlayStation 5 will come with Astro’s Playroom already installed when the system launches on November 12. After playing its first level, I can see why Sony wanted to give every PS5 owner a chance to experience this charming and creative 3D platformer.

Astro’s Playroom is a sequel to Astro Bot: Rescue Mission, a 2018 PSVR game. You control Astro with the same moveset. It focuses on simple 3D platforming with a laser-powered hover jump standing out as his most unique ability. But while Rescue Mission is a showcase for the PSVR headset, Playroom shows off all of the features of the PS5’s controller, the DualSense.

Sony has touted haptic feedback as a big feature for the DualSense. This is a more advanced form of controller rumble, and Astro’s Playroom takes every opportunity to show it off. Even just making Astro walk around will have your controller give off little vibrations to match his footsteps. The experience is even more effective when used together with the controller’s speaker, so these footsteps will even sound different based on what kind of surface you’re walking over.

The haptic feedback creates all kinds of sensations. At one point in the first level, which takes place inside an imaginative version of the PlayStation 5’s cooling system, you must run toward a giant cooling fan while it kicks sand against you. The shaking you get from the controller during this makes you feel like you’re really pushing yourself through the wind’s resistance. 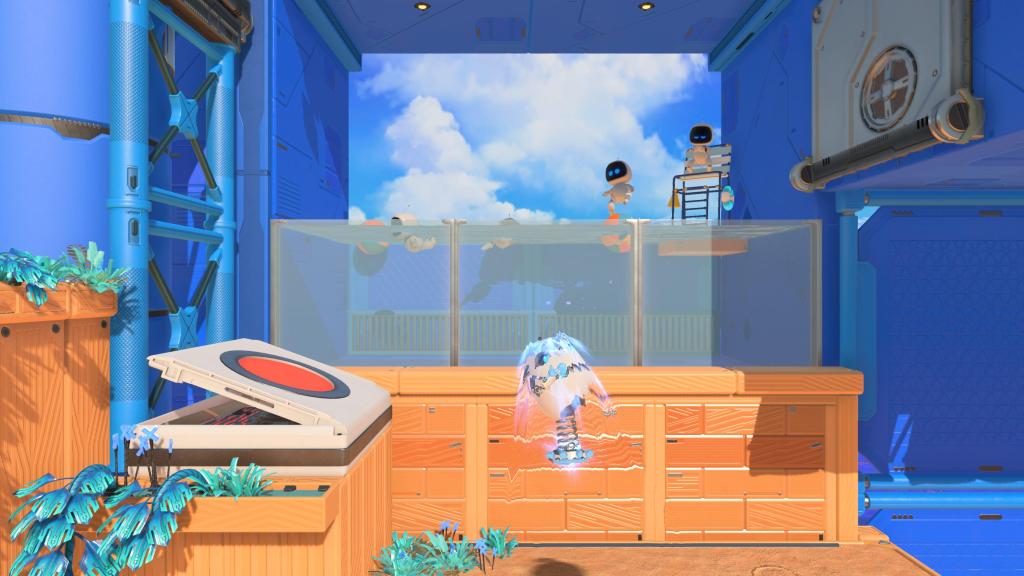 Above: Spring into action!

And then there’s the adaptive triggers, the other major new feature of the DualSense. This enables the controller to add resistance to the two main trigger buttons. In this level, this comes into play during sections where you get inside a spring suit. You now move around while pushing down a trigger and then releasing to bounce. As you push on that trigger, the resistance you feel gives you the impression that you’re actually pushing down on a tightening spring.

Astro’s Playroom also makes use of some more familiar controller features. Just like the PlayStation 4’s DualShock 4, the device has a touchpad in the middle. Remember that bouncy suit I mentioned? Well, when you jump inside, you have to zip the suit on by running your finger up the touchpad. Sure, it’s gimmicky, but the vibrations from the haptic feedback make it a fun a moment. The DualSense also has motion sensors, which have been standard for PlayStation controllers since the PlayStation 3. When bouncing around in that spring suit, you have to tilt you controller to aim your jumps.

The DualSense also has a built-in microphone. That could make chatting with friends easier if you don’t want to wear a headset, but Astro Boy also has some fun with it. In the cooling station level, you come across a platform on water with an attached fan. You have to blow into your controller to make the platform move. 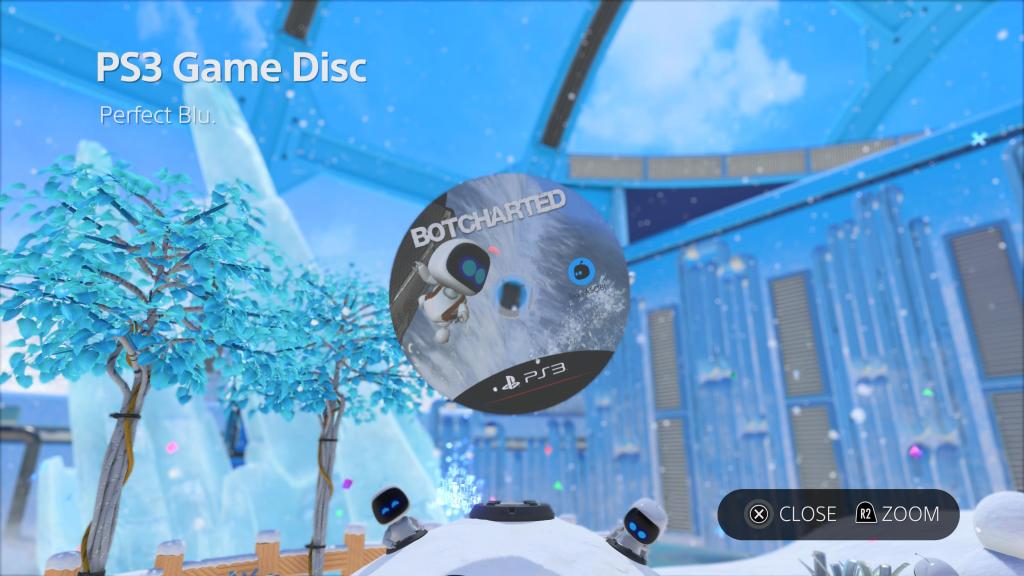 Above: That’s not what that game was called!

A tribute to all PlayStations

Together, these examples may sound like a string of gimmicks. But they all feel great because Astro’s Playroom is so much fun. The platforming is precise, but charm really carries the experience. Everywhere you look, you’ll see other Astro Bots frolicking, playing, or engaging in some random activity.

You’ll also discover tributes to dozens of iconic PlayStation characters. I don’t want to spoil these too much, because they are so much fun to discover, but you can see an example of one of the first cameos that you’ll come across in the video below.

The PlayStation brand is omnipresent in Astro’s Playroom. The Triangle, Circle, Square, and X button symbols litter each area. Elements of PlayStation hardware can make up part of the geometry in surprising ways. Each level focuses on one of the older PlayStation machines. For this cooling station stage, you’ll discover tributes to the PlayStation 3 era. If you ever had any love for any PlayStation, you’ll have a smile on your face the whole time you play Astro’s Playroom.

That’s why this game is the ideal first experience for a new PlayStation 5 owner. It shows what makes their new controller special, and it’s a celebration of the PlayStation consoles that came before this latest machine. Of course, it’s also a fantastic 3D platformer in its own right.

And you’ll see all of that just by playing this first level.