When the RTX 3080 launched, it was undeniably exciting to see a huge leap in power over previous video cards. But that’s a $700 GPU, and even though the 3080 sold out in minutes, it’s not the card that most people will buy. The sweet spot for GPUs over the last half-decade is the $500 option. That’s why I was looking forward to the RTX 3070 — especially since Nvidia is promising that the more affordable card’s performance matches the capabilities of the $1,200 RTX 2080 Ti. That’s exciting. And the final product lives up to those claims.

The RTX 3070 is about as powerful as the fastest card from last generation for about half the price. That means it’s an excellent GPU for 4K60 gaming but at a price that finally makes sense for a much wider audience. It also has all of the great creation features that Nvidia uses to set itself apart from AMD’s offerings.

Let’s break it down.

When Nvidia debuted its RTX 3000-series lineup, the 3070 stood out even among the impressive 3080 and monstrous 3090. The reason for that is because the 3070 didn’t just sound like a good GPU for the money — it sounded like the kind of card that made anyone who bought a 2080 Ti kick themselves. But isn’t that just marketing? Even with AMD getting more competitive, Nvidia wouldn’t make the 2080 Ti look like a joke by releasing a comparable product for less than half the price, right? Wrong.

The 3070 matches the 2080 Ti in performance. And because I am short on time (thanks Xbox Series X, PlayStation 5, Ryzen, and Pikmin 3!), that’s the comparison I’m going to focus on. It should go without saying that the RTX 3070 is a significantly better card than the 2070 Super or any other $500-range GPU. But if you can really get 2080 Ti performance with and without ray tracing, the 3070 should strike that sweet spot that a lot of PC gamers are looking for.

And you can see in the 3DMark TimeSpy Extreme benchmark, the 3070 should match the 2080 Ti. 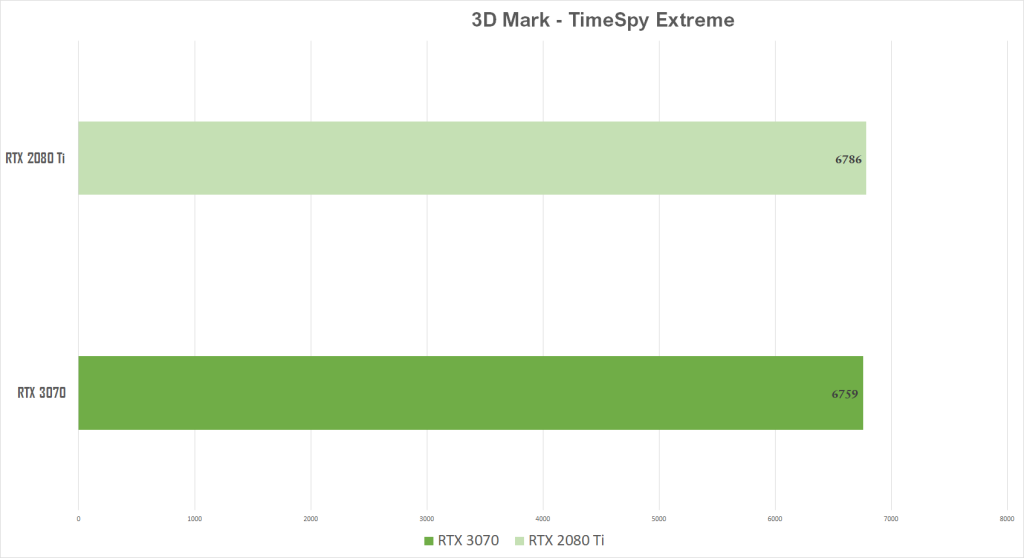 Let’s start with a newer game that tends to crush even well-equipped PCs: Marvel’s Avengers. Both cards run at an average of 45 frames per second, but the 3070 is more consistent. You can see that in the 95% and 99% lows in the chart below. As a reminder, the game runs at this framerate or faster for 95% of the time for the 95% lows and 99% of the time for the 99% lows. 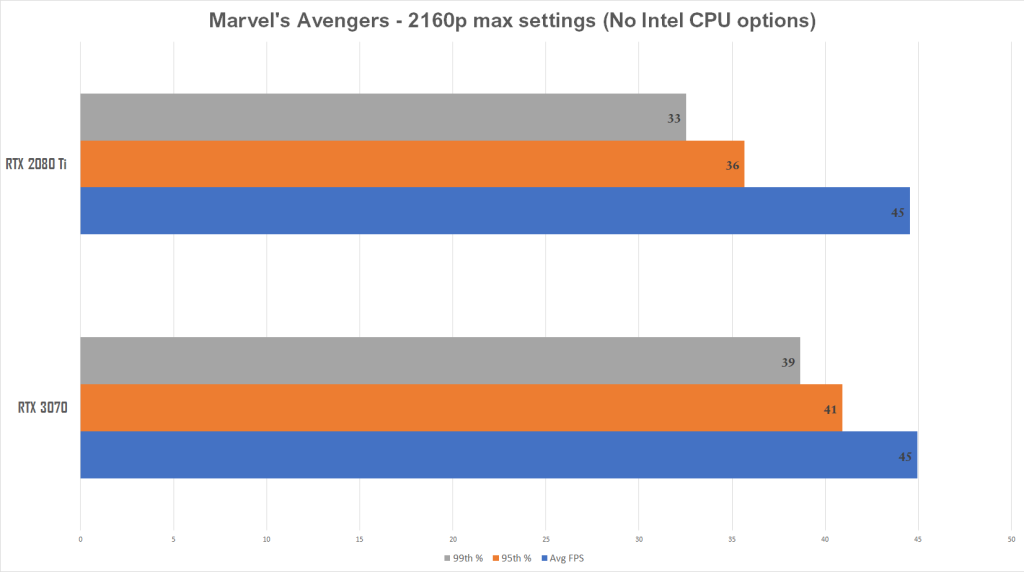 While Avengers had a 99% low of 33 frames per second on 2080 Ti, the 3070 had a framerate of 39 for that same metric. That’s going to result in less stuttering. Of course, you could always flip on DLSS, which is now available in Avengers. And really that should say “you should always flip on DLSS.” This image-reconstruction technique has almost no real drawbacks, and instead, gets you results like this at 4K with ultra settings on a $500 graphics card:

Flight Simulator is another rough game for modern hardware thanks to its truly next-gen visuals. Set to ultra, even the RTX 3080 struggles with a vista like Rio. The 2080 Ti, meanwhile, runs this environment at 35 frames per second, which is 8% faster than the 3070’s 32 frames per second. 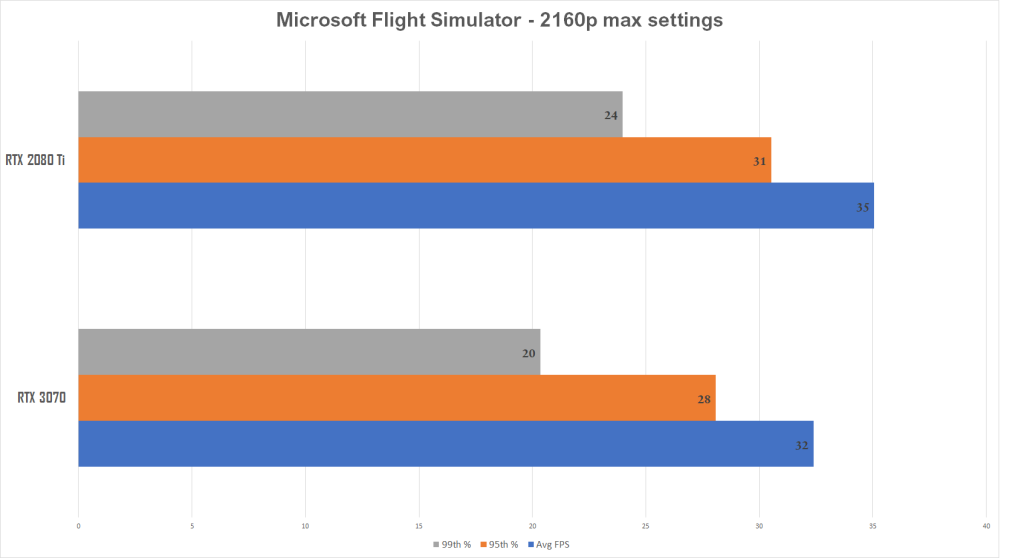 While I would describe the 3070 as keeping up with the 2080 Ti, it doesn’t surpass that card. And it often falls behind by as much as 8%.

Control, however, is a good example of the 3070 bringing true 2080 Ti power to its more affordable package. It has near-identical performance to the more expensive GPU in 4K with ray tracing set to high and DLSS off. And really, for both video cards, that’s too much. Each game runs around 23-to-24 frames per second on average. 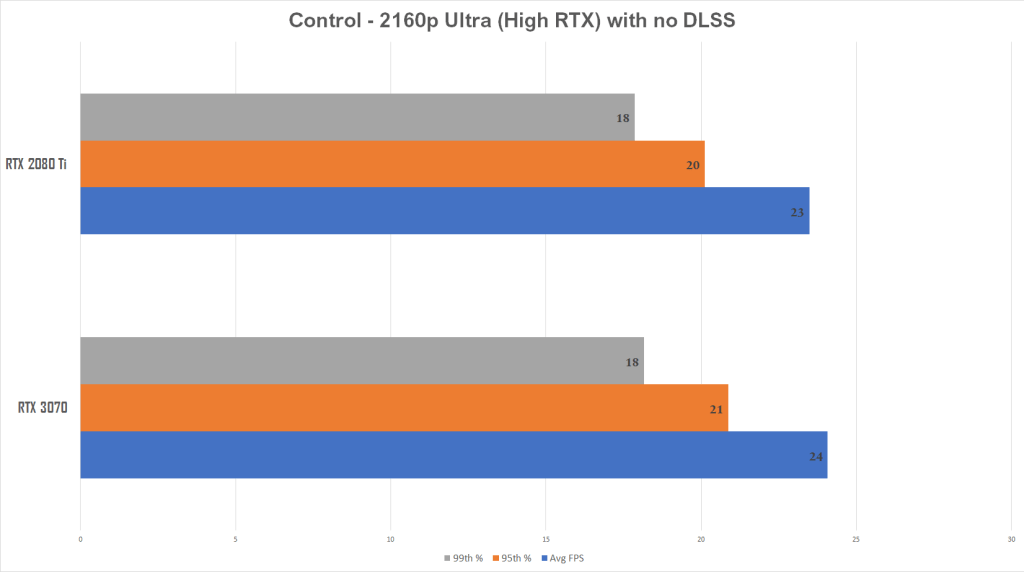 But flip on DLSS with a 1253p render resolution, and you get 55 frames per second on average in each card. 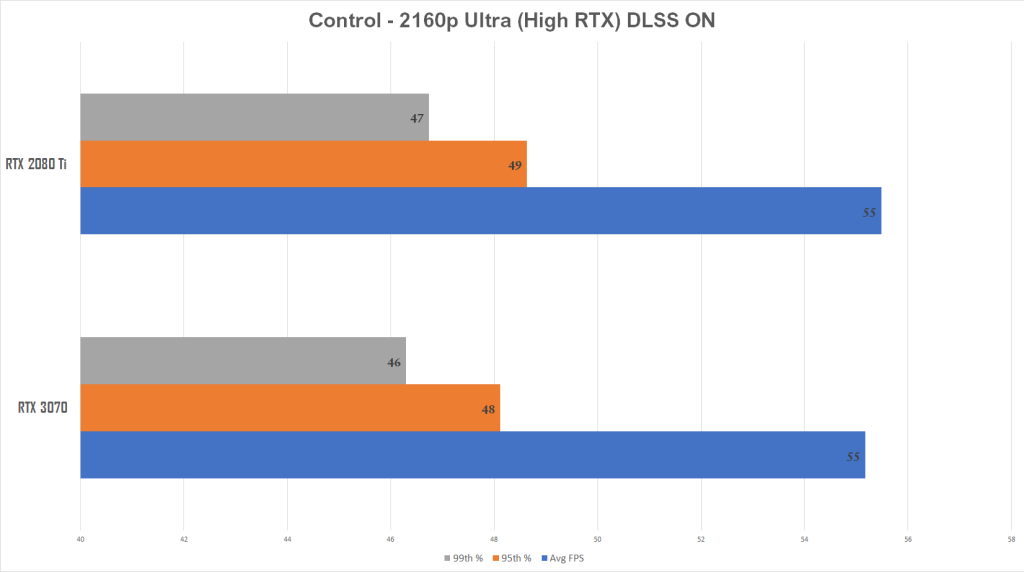 You’ll find similar results across a number of other games. 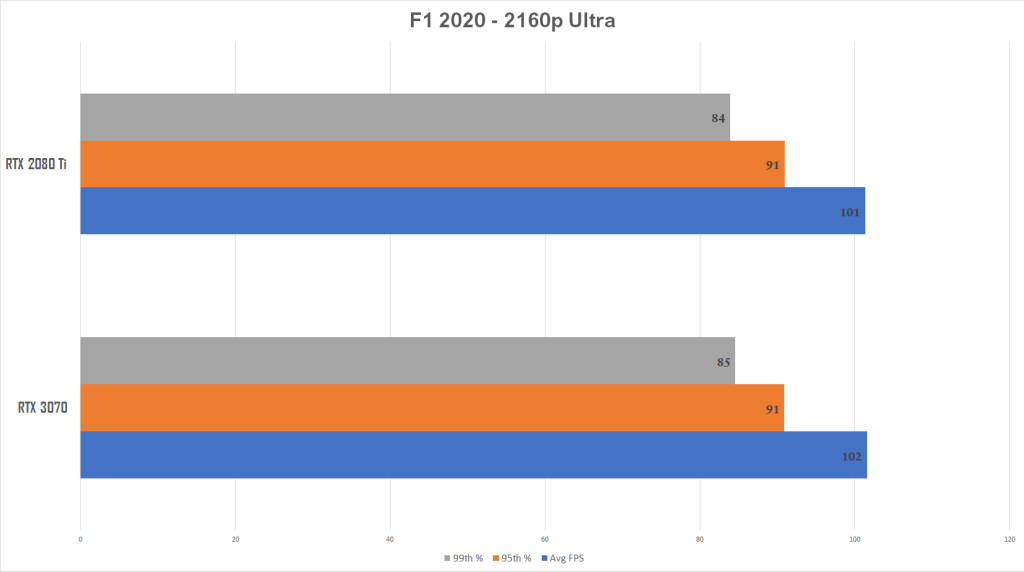 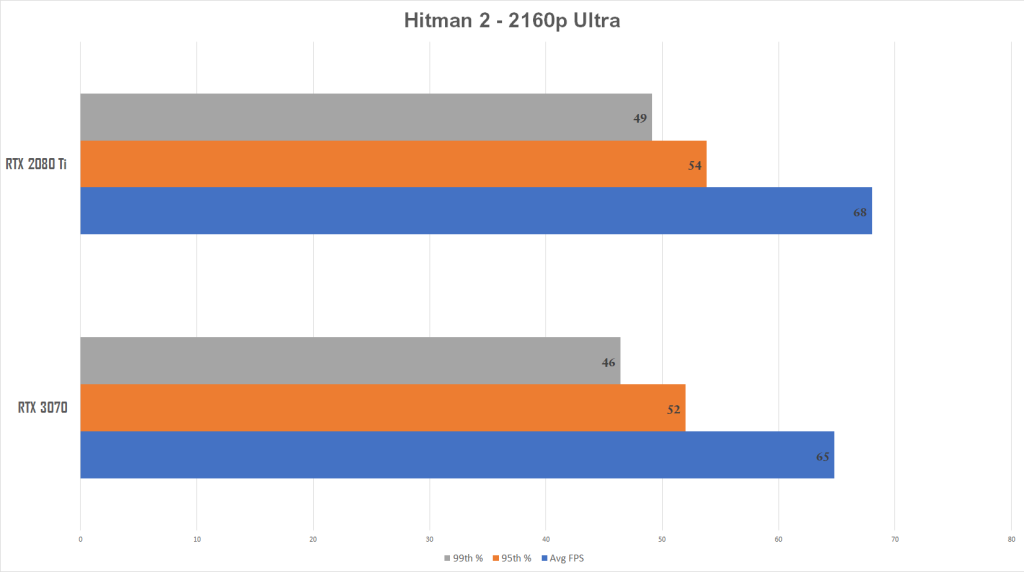 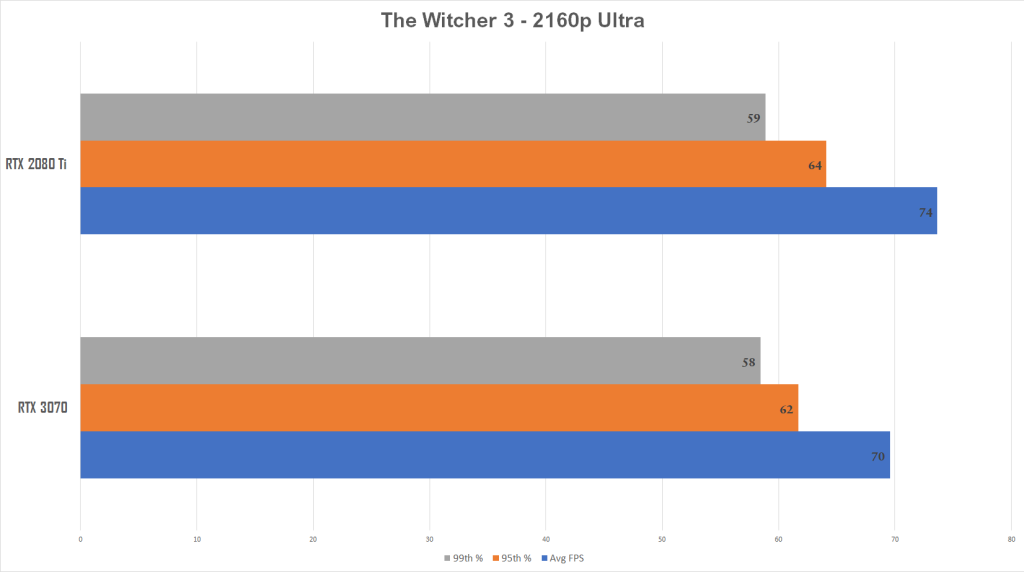 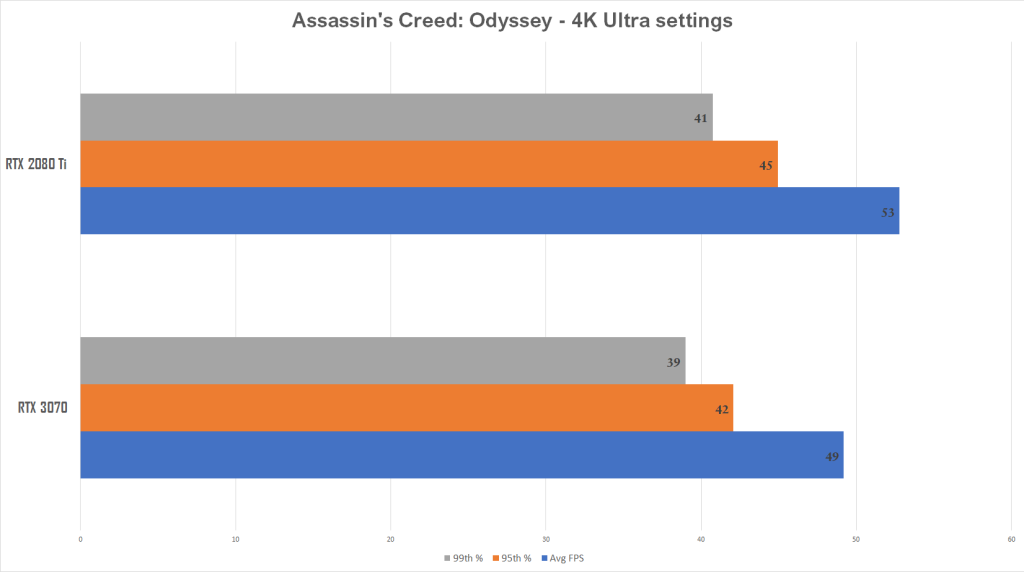 And Counter-Strike: Global Offensive is effectively even across both cards but is slightly more consistent on the 3070. 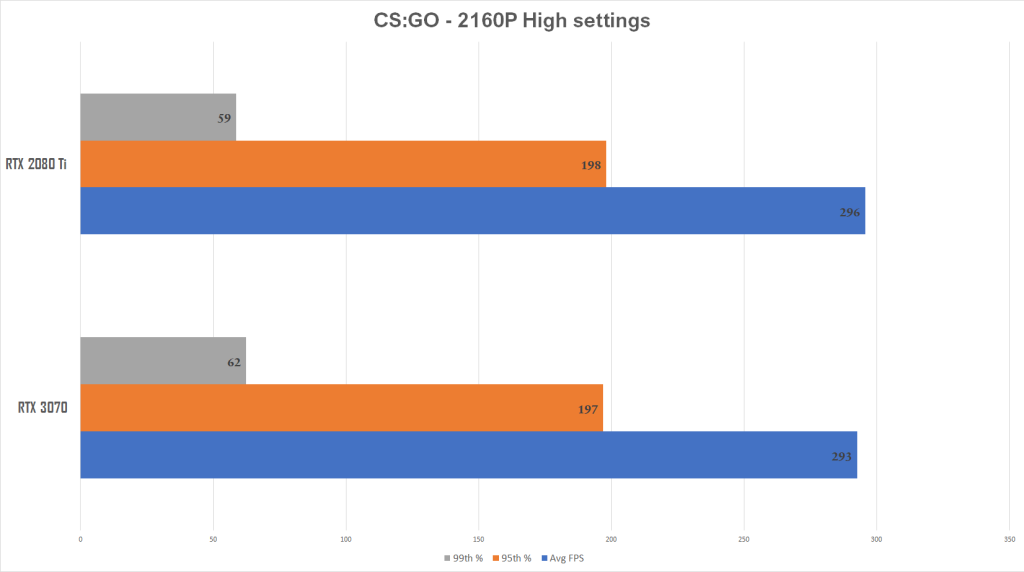 A great GPU for creation and productivity

Gaming performance is one thing, but creation and productivity should take advantage of the extra Cuda cores in the 3070 vs. the 2080 Ti. And that is definitely the case in something like the 3D-creation tool Blender. Running the Blender Benchmark, some tests were about even, but others saw massive improvements on the 3070. The Victor test took 35 fewer seconds and the the Classroom bench required 29 fewer seconds on the RTX 3070. 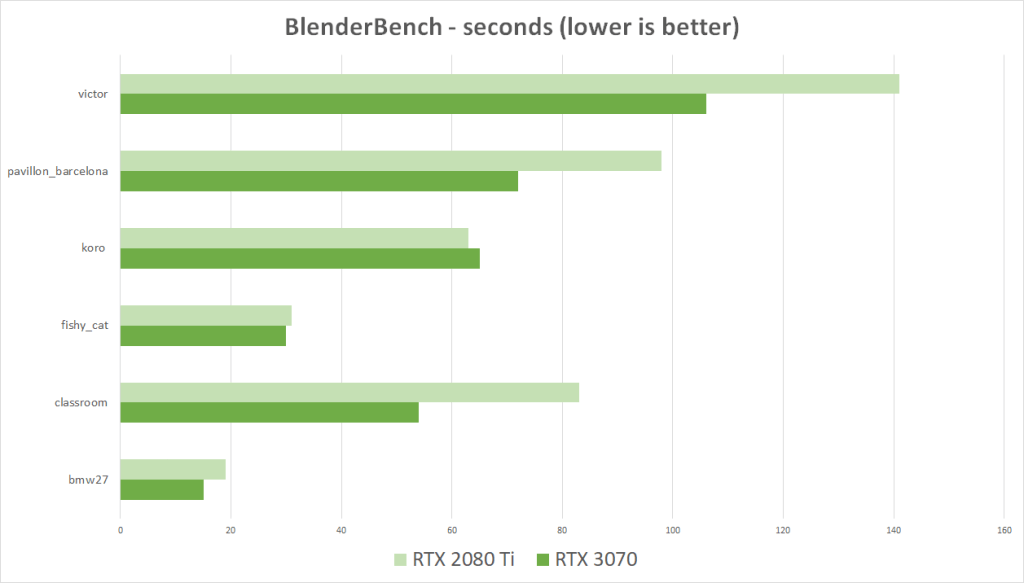 But the 2080 Ti was actually faster in most of the benchmarks for an Adobe product like Premiere. I think this probably comes down to the 2080 Ti boosting up to higher clock speeds more frequently.

I’m surprised with the thermal and aural performance of the RTX 3070. For me, it stayed relatively cool and quiet. But the card does get loud at times. When the fans rev up to full speed, you can hear the cards little fan motors struggling and whining. But the reality is that the fans rarely went up to full speed for me. During intense gameplay, the 3070 would run between 76 and 79 degrees C. And at those temps, the fans don’t have to work hard to move heat out of the system.

But my Founder’s Edition 2080 Ti was also pretty quiet. And I’ve talked to enough other 2080 Ti users to know there is some variability with that. So don’t take this as my word that you’ll have the same exact experience. If you’re in a hotter climate, that could push the temps up into a range where the fans really do have to kick into high gear during gameplay.

What about the new Radeon GPUs?

The timing of this review is likely not coincidence. Nvidia set the embargo for the day before AMD’s Radeon event because these two companies love messing with each other. But the point is that I’m writing this before we know how the next-generation Navi cards are going to handle rendering and ray tracing. But I’ll give you my guess.

I think the Radeon cards are likely going to get very close to Nvidia in terms of traditional rasterization performance. But I’m skeptical that AMD will keep up with everything else that Nvidia is offering.

It’s going to come down to ray tracing and DLSS

As far as gaming is concerned, you cannot overlook ray tracing and DLSS anymore. AMD has some form of hardware ray tracing coming. It’s in both the PlayStation 5 and Xbox Series X. But does it match what RTX is capable of? And even if it looks as nice, will it run well without something like machine learning image algorithms?

It’s possible, but I bet that Nvidia still holds a lead in that department thanks to its emphasis on artificial intelligence. And that’s why if you must get a new GPU now, I’m not gonna hesitate to recommend the RTX 3070. It’s fantastic. This is the kind of graphical leap that we want from new video cards, and Nvidia delivered. And the software is only getting better with improved NVENC video, AI features in Photoshop, and more.

Also, I think you’ll have an easier time finding this than the RTX 3080.

The RTX 3070 launches October 29 for $500. Nvidia provided a review sample for the purpose of our coverage.