Two Bit Circus hasn’t been able to entertain guests in its modern virtual reality arcade during the pandemic. So the company has launched an interactive virtual game show that it hopes will entertain people online instead.

The Remote trivia game show tests your knowledge and your speed at answering questions. The show will air at 7 p.m. Pacific every Thursday. People can play it from their homes via a browser and even appear as special guests via Zoom.

The company developed Remote in quarantine because the circus crew has been a little stir-crazy. They channeled their energy into building a platform of fun games that could bring people together regardless of their physical locations.

While bouncing a baby on a Zoom call, CEO Brent Bushnell said in an interview with GamesBeat, “We basically built a toolbox for game shows. Our interactive window has multiple choice trivia or Family Feud-style questions. You can stitch together different mechanics.”

The show divides the screen into four quadrants on a Zoom call. One quadrant is a livestream of the host. Another is a chat window. A third quadrant is a leaderboard. And the fourth has the content for the game. The chat window has a “gameshowbot” that draws people out by name so that they join the conversation. That’s part of an attempt to make people feel excited about an online experience.

Above: Trivia is part of the Remote virtual game show.

Remote can accommodate hundreds of players, as most of them play along on the web. But a couple of players are invited to join with their video, via invitations on Zoom.

“The mechanics can scale,” Bushnell, the son of Atari cofounder Nolan Bushnell, said. “We wanted something that would work for hundreds of thousands. While everybody plays together, they don’t have to all be on video.”

Eric Gradman, the developer of the show and a founder of Two Bit Circus, serves as the host of some of the shows, but other trained Two Bit Circus hosts will also helm the shows as they grow in popularity. Serving as the host is natural for Gradman and Bushnell, who both used to be professional clowns.

The company has been refining the idea for years, but it kicked into high gear during the pandemic, as the company’s main Los Angeles site for its modern “micro-amusement park” has been closed. The company developed new versions of the show every week as it prepared for the launch.

“The game show development has really been an interesting process for us because we always wanted to build stuff for online,” Bushnell said. “It was never a priority until the pandemic and all of a sudden, it rocketed to the top of the list.”

Bushnell said the company has negotiated with its landlord for the park building and has been able to hang on, and now it can generate some revenue from the online game show. 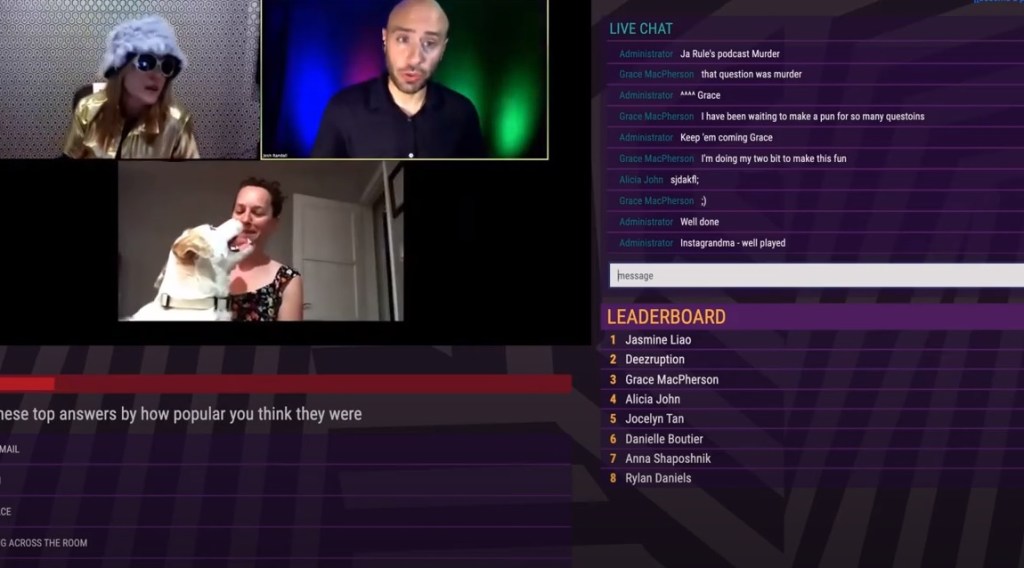 The hosts lead players through a variety show of games with hilarious commentary and special guests, selecting a couple of players to join live on the air alongside the at-home audience.

The 1-hour public show is free. But Two Bit Circus has also created a version of the show that corporate clients can pay for to entertain their employees. On top of that, Two Bit Circus will also white label the platform so that others can adopt it and customize shows for their own purposes such as team building, Bushnell said. Online conferences are a good candidate for the white-label solution, he said.

The show debuts Thursday, October 29, with a Halloween theme. On November 5, it will have a history theme, and on November 12, it will have a sci-fi theme. The company is also piloting a Remote Dating game. Guest content is unfiltered and so the show is rated for those 18 and older.

Two Bit Circus considers this online arm to be a permanent fixture for its community going forward, as it still has no idea when places such as its park can reopen. The company has already done lots of private shows for companies.

Above: The pre-pandemic Two Bit Circus

Gradman said that a lot of regulars are showing up for the shows. He said the team decided it would be better to have shows people could play together, rather than play directly against each other. While they have a leaderboard, it isn’t based on cutthroat competition like a battle royale game.

“I tend to downplay the competitiveness,” Gradman said. “One thing we found in our park was the idea that you were elbow to elbow with people, not nose to nose. We were trying to get them on the same side of the line playing together. We’re trying to restore relationships that have been torn apart by our mutual isolation.”