When you’re promoting a game, you usually try not to let your fans see the financial stresses that come with development. France-based Flying Oak Games did just the opposite while working on ScourgeBringer.

ScourgeBringer is a roguelike platformer that is out now for Switch, Xbox One, and PC, debuting after two-and-a-half years of work. While making the game, Flying Oak published a development diary. Not only would it show the game in progress, but the studio also openly talked about the game’s budget. It did this not by talking about money but by measuring it with time. They told the public how many more months they could spend working on the game before encountering financial difficulties. This journal was an important part of the ScourgeBringer story while Flying Oak searched for a publisher, which ended up being Dear Villagers.

I chatted with ScourgeBringer director Thomas Altenburger about this interesting approach. He is one half of the two-person operation that makes up the studio, along with Florian Hurtaut. The two were also behind the 2016 twin-stick shooter-RPG NeuroVoider.

Show them the money?

GamesBeat: Why measure budget based off of months instead of dollars?

Thomas Altenburger: The idea behind doing months of subsistence — it’s because it makes sense to everybody. Money is something that ends up being quite abstract to a lot of people. It’s hard to communicate what’s actually the value in work and in making games. We choose to abstract the monetary factor from it. We noticed that people related to it much more. Instead of talking about real money, talking about your current remaining months of subsistence, speaks to more of the people around the table. It’s a kind of dramatic effect. People believe that when it’s going to go down to zero, everything is going to stop. Which is the case. That was the idea behind switching to this. 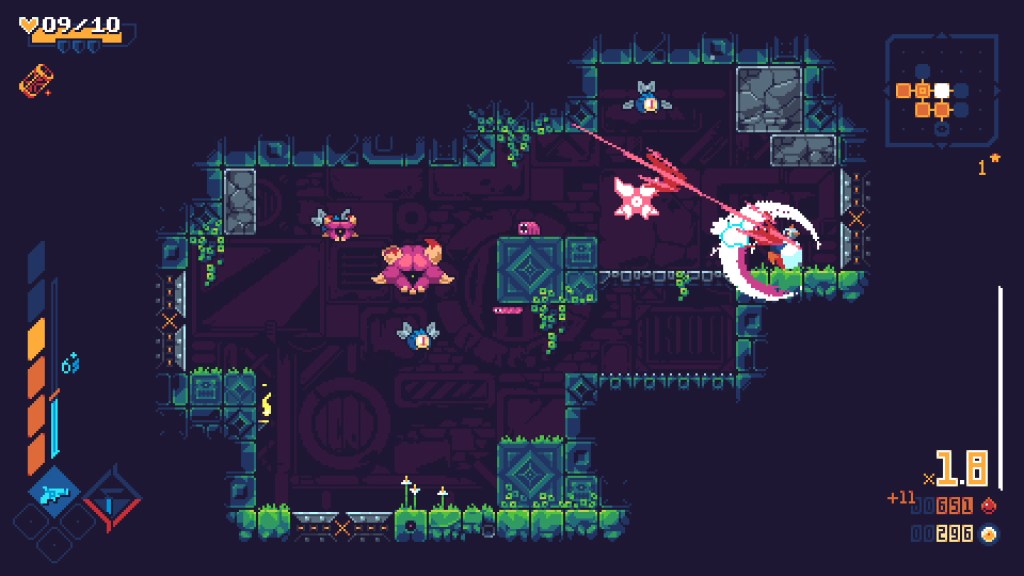 Above: ScourgeBringer has Beautiful 2D art.

GamesBeat: Why share this kind of information with the public in the first place?

Altenburger: It comes back to our previous game, which was called NeuroVoider. It’s a game that also went through an early access period, and it’s a game that we also built with community feedback. At first we did this because we were not well known in the game industry. We needed to have our own way to build a community and bootstrap. The idea to have the ad before we signed with a publisher was to try to do something a little different. We knew we were kind of bad at management, but we were good at making games and following up on that. We also needed to have community feedback. We set up a whole open-development process with weekly updates and an in-game feedback system, where people could send us anonymous feedback. It worked quite well. People were really engaged with the project. We built a big sense of connection. It was very good for the game, because we made a lot of changes and improvements based on all the feedback. We liked working this way quite a lot.

When we started working on ScourgeBringer, we thought about what we could do with that principle of working. What could we push forward? The idea was to push forward with a weekly newsletter and opening up the books about everything that’s going on. We wanted to document the making of the game from before the very start, even before it was an idea, and of course with the budget and so on. It worked quite well. People were really engaged with the newsletter, seeing how things work, seeing how the budgeting works. They were also very responsive to the fact that we were not, at first, 100%working on ScourgeBringer, because we hadn’t yet secured all the funding for making the game. We didn’t have a publisher back then. We also talked about what were our different sources of revenue. We talked in the newsletter, when we were not working on ScourgeBringer, and when we were doing some contract work. For instance, in the early days of the project, we were also working for some other studios. We were outsourcers for graphics, and we helped another studio port their game to Nintendo Switch. All of this has brought back revenue and been integrated into the project for what was to be ScourgeBringer.

GamesBeat: When the pandemic started, did that change the budgeting process for the game? Did a month mean something different than it used to mean?

Altenburger: No, we’ve been lucky enough to be in a context where we were quite OK. We do have an office, and we usually work at this office. But during the pandemic, we were obviously restrained at home. The budget was quite the same. We still had to pay our rent for the office, so our budget was pretty much the same. We haven’t had that much of an impact. We also used to inject the revenues of our previous game into the next game.

In regard to ScourgeBringer and our previous game, during the pandemic we didn’t observe any drops compared to normal times. It was pretty smooth. I believe that we’re on the lucky side of things when it comes to the pandemic. It went quite OK. We didn’t see any delays in the production. We’ve been working quite smoothly.

GamesBeat: When you found a publisher, did it want you to stop sharing this kind of information?

Altenburger: Most of the publishers we talked to were very open to this, especially Dear Villagers, who we’re working with. When we first talked to them, we told them that we had this ongoing newsletter, with the open books and so on. They were very responsive. They told us, no, it’s fine. You can keep the newsletter. You can keep the open book on the project. There were no worries about it. They believed that it can be a valuable marketing asset. The community was already attached to it, so they allowed us to continue. However, at some point we ended up kind of dropping off all the budget. When Dear Villagers came in, we also began to have other actors coming in, like Microsoft and Nintendo and so on. All the partners, when you have all the stuff coming together — we reached a point where the game was fully funded and up.

Once it was fully funded and we were sure we would be fine going to the end of the project, we dropped the open book, because it wasn’t relevant anymore. We just say that the project is going fine, and starting from now the books are closed. 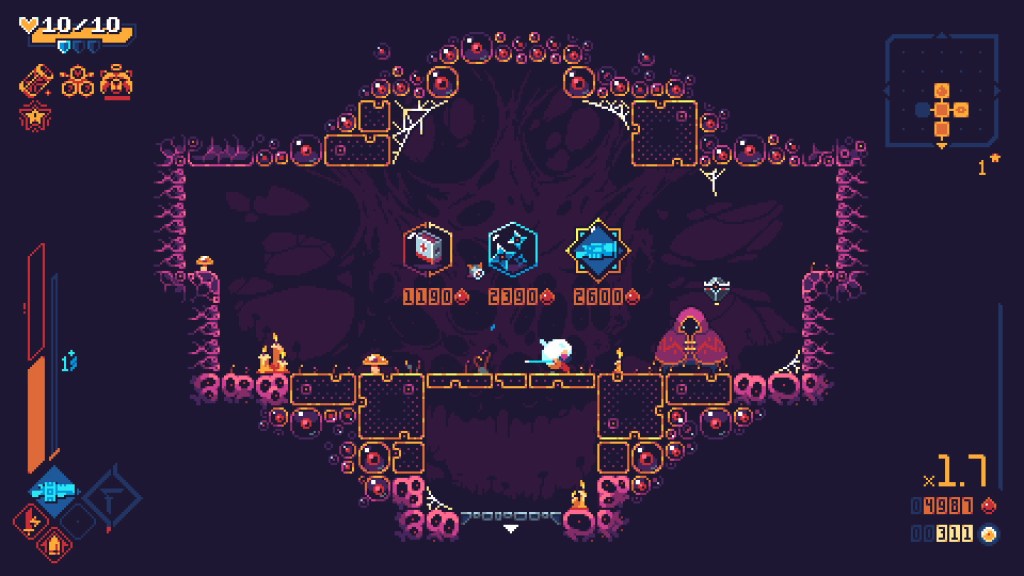 Above: It’s not a modern roguelike without a shop.

GamesBeat: Do you think you’d do this open book approach again with your next game.

Altenburger: Likely? It’s something we still really like. For many reasons. One reason is that it also helps other developers to have a better valuing of their own work, how to fund and set up a budget for their own projects. The other interesting thing is that it also helps to raise some awareness on the player side. Players already have an idea of the value of games. Games are usually devalued a lot, when you see all these sales happening all the time, the various Steam sales and so on. Also, the fact that everything that is crowdfunded, making a Kickstarter and so on — usually, very very often, the budget that’s presented on a Kickstarter, or what people are trying to get through Kickstarter, is usually a small fraction of the full budget of a game. What people may also not be aware of is that most of it, they’re not even going to see it, because of taxes and the cost of rewards and so on. Usually it’s maybe half of what you ask on Kickstarter that ends up in the pockets of the company.

There’s the idea that games aren’t that expensive. When you see games asking for a certain amount on Kickstarter, you may think that making a game only costs that much. The fact is it might be tenfold compared to that. The open book is a kind of political stance. We want to raise awareness about how games are built and what they actually cost and why they’re sold for a specific price and so on. We saw some positive effects to this.

For instance, we’re just a core team of three or four people on the game. Sometimes there are comments and reviews from people who don’t know the team, who didn’t follow the newsletter and so on. They sometimes come back with feedback — you should do this, you should do that, you should expand your game, your game should be as big as this one. Having the open books helps to inform the community. There are often people coming to drop by and people will say, you know, they’re not that big a team, and they opened the project, so you can follow what they’re doing. They’re doing the best with what they can do with their budget and the size of the team and so on. It’s worked to organize people. We’re also pleased to see that adding the open books helps to get better feedback and a better sense of recognition for our work.