AMD is officially and undeniably a player once again on the high-end of GPU spectrum. It is unleashing the Radeon RX 6800 XT and 6800 for $650 and $580, respectively, beginning November 18. And these cards are positioned to directly take on Nvidia’s $700 RTX 3080 and $500 RTX 3070. And in my testing, the GPUs trade blows across a number of games. But unlike in the CPU space, where Ryzen clearly tells a tale of superiority through the benchmarks, no clear victor emerges in the battle between Radeon and GeForce. That’s because each company is using different technologies and philosophies that can occasionally lead to big wins for one side or the other.

And while the nuances that set Nvidia and AMD apart might cause you to agonize, I urge you to look at it like this: You can’t go wrong. We’re entering a golden age for superpowered GPU performance.

I tested the Radeon and GeForce cards on the following machine:

The quick version of the results is that the Nvidia RTX 3080 and the AMD RX 6800 XT are even when all settings are equal. I need to retest the RTX 3070, so it’s not included in any of these charts. But as I’ve started doing that, the RX 6800 is often slightly ahead — again, when all variable are eliminated.

In Watch Dogs: Legion, the RTX 3080 has a slight advantage at 1440p, but they’re essentially tied at 2160p. It’s the same story for those two cards in Flight Simulator.

Comparing the raw like-for-like capabilities of the GPUs makes sense if I’m trying to award a medal to the company who designed the best chip. But that doesn’t actually mean a whole lot to you as a gamer in the real world. These GPUs do not exist in a vacuum separate from their specific software and hardware features.

For Nvidia, that includes the incredible deep-learning supersampling (DLSS) that can reconstruct a lower-resolution image into a frame that looks indistinguishable from a native higher resolution.

AMD’s features include smart-access memory (SAM), which enables the GPU to share its memory with your system’s CPU. This makes a huge difference to performance. It only works with Ryzen chips on certain X570 motherboards at the moment, but you should absolutely attempt to build your PC to take advantage of this. It makes a huge difference.

So let’s untether these GPUs. What are they capable of when we forget about like-for-like and start taking advantage of all the software and hardware engineering AMD and Nvidia are investing in?

Well, with SAM enabled, the RX 6800 — not the XT — nails an average of 119 frames per second in Death Stranding at 4K. The 6800 XT, meanwhile, surges to 135 frames per second with SAM plus its Rage mode power profile. That puts both ahead of the RTX 3080 — until you turn on DLSS in performance mode, which gets Nvidia’s $700 card a massive 159 frames per second.

But not every game supports DLSS. That’s a feature developers need to enable. So an older game like Hitman 2 runs nearly as fast on the RX 6800 with SAM at 75 frames per second as the RTX 3080’s framerate of 78.

SAM doesn’t always push the Radeon’s ahead. In Marvel’s Avengers at 1440p, the 3080 averaged 108 frames per second, and the 6800 XT didn’t see any improvement with SAM and Rage mode. 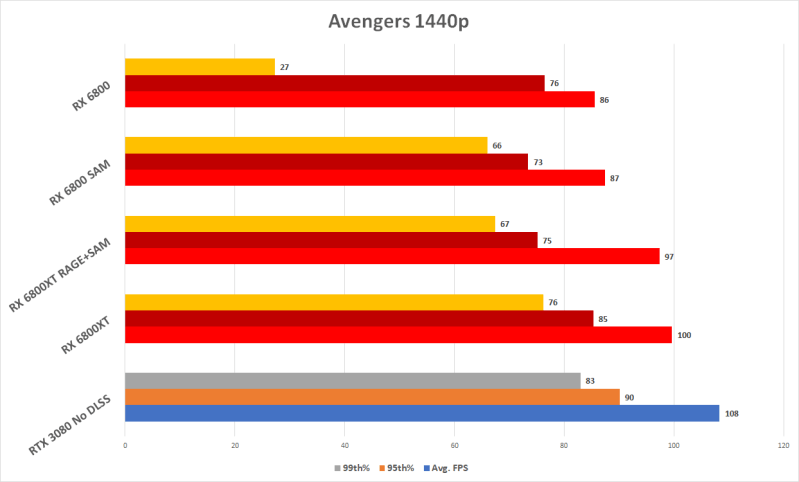 Just buy it — if you can find it

Go ahead and upgrade. Buy the best GPU you can afford that you can actually find. It doesn’t really matter if it’s from AMD or Nvidia. Both are kicking ass at the moment.

If you have a specific need, like Nvidia’s NVENC for content creation, then go with Nvidia. If you want a card that won’t necessarily need DLSS support to get supercharged performance, then try to go with one of the AMD offerings if you have a Ryzen or plan to go with a Ryzen CPU in the future.

But even that’s too simple.

Sure, DLSS isn’t in every game, but it’s growing in popularity. Small indie games from one-person studios like Pumpkin Jack are launching with ray-tracing and DLSS. So I think you can have some confidence that this feature will get support going forward.

At the same time, we know that AMD is working on its own machine-learning supersampling. And more importantly, it’s working on that tech with Microsoft to implement into the Xbox. In the long run, that could give AMD’s tech the advantage because it could mean that every game made for console will include AMD’s AI upsampling by default.

And while we’re talking about the vague future, Nvidia claims it’ll have a SAM-equivalent feature for its current GPUs ready to go soon. This memory-sharing tech is a standard feature in the spec for PCIe 4.0, so you should see it soon.

But look at me. I’m agonizing — just like I said not to. Just go find one of these cards and start gaming. Because whoever wins between Nvidia and AMD — you cannot lose.