Intel Capital invested in amateur esports firm BoomTV as part of a broad move to raise the profile of gamers and esports in mainstream culture.

While esports players winning multimillion-dollar purses in big tournaments get a lot of attention, BoomTV is trying to fill out the rest of the talent pipeline, bringing along the students and the amateur players who are only beginning to be discovered by professional esports team recruiters. And it is doing so by enabling the smaller events to broadcast their matches and post highlights that can get noticed more widely. In the long term, BoomTV wants game spectating to become a far bigger market than gaming itself.

Livestreaming platforms such as Twitch and giant League of Legends championship matches are making this a reality, but BoomTV is providing a missing piece that can serve as the bridge from amateur to pro play. Pushing esports down from the pro level to college and even high schools can have a lot of cultural impact. Nerds and jocks typically clash in high school, but pretty much everyone plays video games now. And being good at games can lead students to big roles on high school esports teams, where those students can experience broader acceptance and build bridges between the nerds and jocks.

“Gaming provides a common interest, and it’s true that super athletes in the NBA and NFL are also hardcore gamers at heart,” Dave Flanagan, vice president and senior managing director at Intel Capital, said in an interview with GamesBeat. “There is an affinity. There are interesting things that emerge out of a platform like this that brings together people who have the same interest yet come from different backgrounds.”

Sumit Gupta, a serial entrepreneur who started three other companies, started BoomTV in 2016 with a focus on virtual reality esports. When that market didn’t take off, BoomTV made its pivot to non-VR, mainstream esports with a heavy focus on professional esports players. But the company also courted and followed gaming influencers, and that led them to the market of amateurs.

Above: Sumit Gupta is top left in this picture of the BoomTV team.

“We didn’t want to wait for the VR market to catch up, and our 2D experiences with esports started gaining traction,” Gupta said.

In August 2019, BoomTV acquired the American Video Game League (AVGL), which focused on college esports programming. AVGL now reaches more than 2,000 colleges and thousands of high school students. Both BoomTV and Intel Capital realized that while scholastic esports is hot, it lacks a talent pipeline where unknown students and amateur players can get noticed by the pro teams and esports media companies.

BoomTV took off as influencers played other influencers in competitive pro-am events and the videos of those events took off. “With AVGL, we made our first foray into collegiate esports,” Gupta said. “The influencers are using our platform to create the narratives that connect the college influencers to the biggest gaming influencers on Twitch and YouTube. Everybody loves stories about underdogs who come from qualifying events.”

There’s definitely a boom in online esports and games during the pandemic. Flanagan said, “Everyone is scrambling for returns now. With gaming, we have liquidity events during a difficult time, and the absolute growth of the industry. That is causing a lot of new investors to look at this segment. It’s no different from the euphoric nature of the interest in the cloud or datacenters or enterprise software now. People are casting a wide net in the hope of getting one or two home runs.”

But it wasn’t always that way, particularly in the early days of esports a couple of decades ago. Flanagan believes Intel was critical in getting pro esports off the ground in the first place.

“If I think about where the market was when we made the substantial commitment and investment in ESL and Intel Extreme Masters tournaments about 16 years ago, it was pretty nascent,” Flanagan said. “We have been a steady partner through the ups and downs, the economic cycles, and we constantly invested in this segment. We helped build a strong brand and commitment to this market.”

Ultimately, Intel hopes a pipeline will develop for esports in the same way that a pipeline for traditional sports has created broader interest in sports and a constant flow of new talent into traditional sports, said Flanagan. He oversees Intel Capital’s investments in client, communications, and gaming technologies. 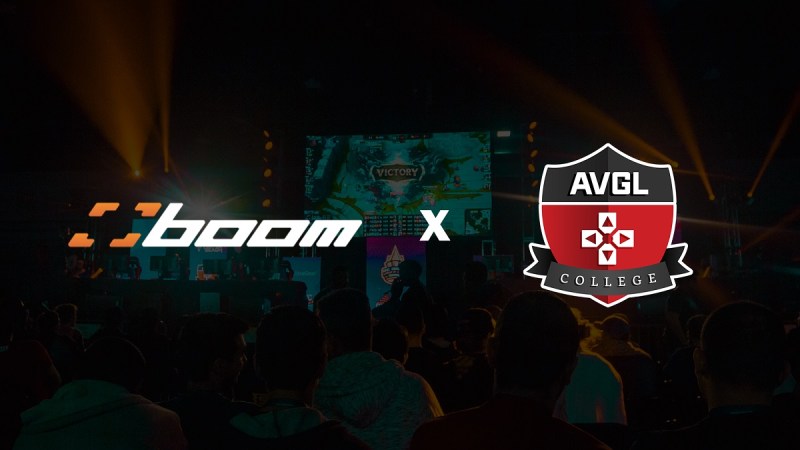 Above: BoomTV has acquired the American Video Game League.

Flanagan met Gupta through Doug Renert, an early investor in BoomTV at Tandem Ventures. “We started to engage early in 2019 with Sumit,” Flanagan said.

Intel, of course, has a double-digit multibillion-dollar business in selling chips for gaming PCs. Esports is a fast-growing segment, and it’s a good way for Intel to engage with the gaming community. Intel’s other investments in games include ESL, BlueStacks, and Overwolf.

Intel collects data on how the community uses Intel’s products and then funnels it to the right people at Intel. Intel can then figure out what kind of datacenters have to be built to support gaming and esports on a large scale, what kind of communications have to be developed, and what kind of processors it has to make.

“We have a long history of engagement with (tournament company) ESL and others on the pro-level of esports,” Flanagan said. “But what we saw with them when they made their pivot was a company that was focused on a gap in the market, where there were emerging players on the high school and collegiate level. We saw an opportunity to engage with BoomTV and build a program. BoomTV is really helping us reach the emerging esports segment.”

Gupta believes that Intel has helped build the infrastructure of esports so that it can become a much bigger part of pop culture and mainstream games. “It makes sense that so many more people will view gameplay because they don’t have the skills to participate themselves,” Gupta said. “Esports can take gaming to the rest of the world.”

While other leagues focused on in-person events, BoomTV focused on digital events from the start. That’s why it still prospered during the pandemic when physical esports had to shut down and online-only events became the norm. BoomTV organized 25 events in the past nine months, but third parties organized even more. 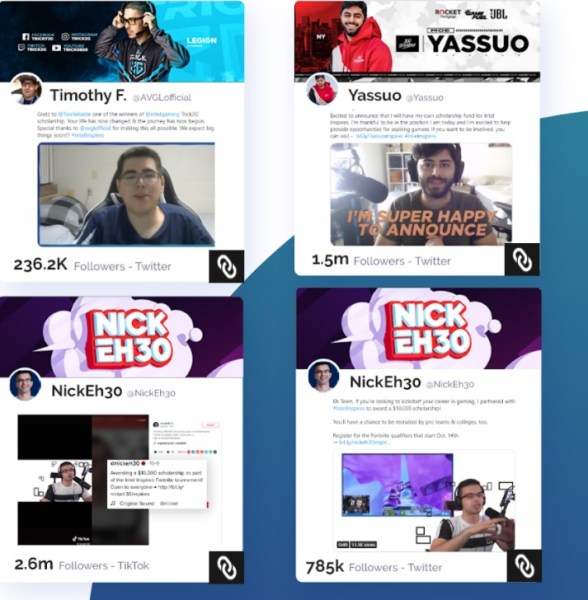 Above: Influencers are engaging with BoomTV’s esports platform.

Intel and BoomTV have now partnered via the Intel Inspires program, which organizes tournaments for amateurs in games such as Fortnite, Rocket League, and League of Legends. The prizes include hundreds of thousands of dollars in scholarships.

“We’re testing new things like Intel Inspires with BoomTV so we can figure out how to grow the audience,” Flanagan said.

In October and November, BoomTV ran the Virtual Combine event, which had more than 6,000 high school gamers competing against each other. More than 500 scouts and coaches from more than 200 college esports programs registered for the event and held more than 450 meetings on the event’s meeting platform. The Intel Inspires livestream reached more than 35 million impressions on the TikTok social platform, with content created on BoomTV, which reached more than 19 million viewers.

There’s a long way to go. While there are thousands of colleges, the National Association of Collegiate Esports (NACE) estimates there are 175 colleges and universities with esports leagues.

“What you have is a lot of fragmentation today,” Flanagan said. “You have clubs at certain schools, sports teams, and different leagues. BoomTV has a lot of the right stitching in its platform to bring this all together now. I can’t tell you when, but you’ll see something like the NCAA emerge from this.”

Above: Intel Inspires event got a lot of traction with college recruiters.

Intel Inspires will continue in 2021 with additional Virtual Combine recruitment events and scholarship funds, with BoomTV providing the platform for organizing events and sharing footage. BoomTV has grown to 32 employees, and it hopes to grow to about 50.

Gupta is inspired by the help from Intel, as well as the emotion of the events when amateurs go pro. “The scholarship money that comes to the people who rise to the top is changing lives,” he said. “People can be the first in their family to go to college, thanks to esports.”