The pandemic boosted game deal-making, with 2020 deals hitting $33.6 billion in value across 665 transactions. This is according to an analysis by InvestGame, which studies market transactions in the game industry.

The numbers show what happens when a perfect storm comes along. The pandemic is hurting many industries, but it’s boosting gaming, as people turn to digital entertainment. It’s helped distract them from a horrible reality and socialize at a distance. And this is putting the entire gaming ecosystem in motion for growth.

Mergers and acquisitions account for $12.6 billion in 219 closed deals. If you factor in announced but not closed deals such as Microsoft’s $7.5 billion acquisition of Bethesda, then the value climbs to $22.2 billion. This makes it the biggest year for deals since 2016, said Sergei Evodkimov, cofounder of InvestGame, in an interview with GamesBeat.

On a regional basis, the U.S. dominated the market with 36% of total deal value, and 4-out-of-the-top 10 transactions closed with U.S.-based targets. China followed the U.S. with 27% of the total deal value and four out of the top-10 deals. 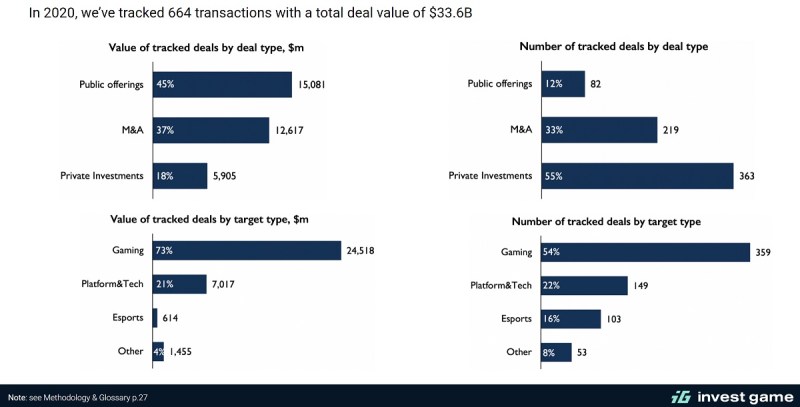 The top acquirers were public game companies: Tencent, Embracer, Stillfront, and Zynga. They accounted for 60% of the total deal value.

Meanwhile, venture capital and corporate investments reached new heights, with $5.9 billion in value and 363 closed deals. Much of the money went into multiplatform game developers and publishers.

And when it came to public markets, 2020 was also an extraordinary year, with 18 video game initial public offerings (IPOs) with a total value of $2.8 billion. The big ones are Unity Software, Skillz, and Kakao Games. Other companies have lined up to do IPOs, but the market window is unpredictable. Since gaming is a very small part of the overall stock market, it is vulnerable to swings of the larger market. The gaming IPO window could shut if the economic conditions worsen, Evdokimov said.

Large game companies consolidated the market during 2020. But growth in sales, downloads, and users was so strong that gaming outperformed many pandemic-stricken industries. As a result, a lot of public and private money swarmed into games as a safe haven, Evdokimov said.

Going forward, InvestGame predicts that public game companies will be the drivers of acquisitions going forward. Tencent and the Nordic companies (like Embracer) will continue to consolidate the market, with many U.S. companies joining. 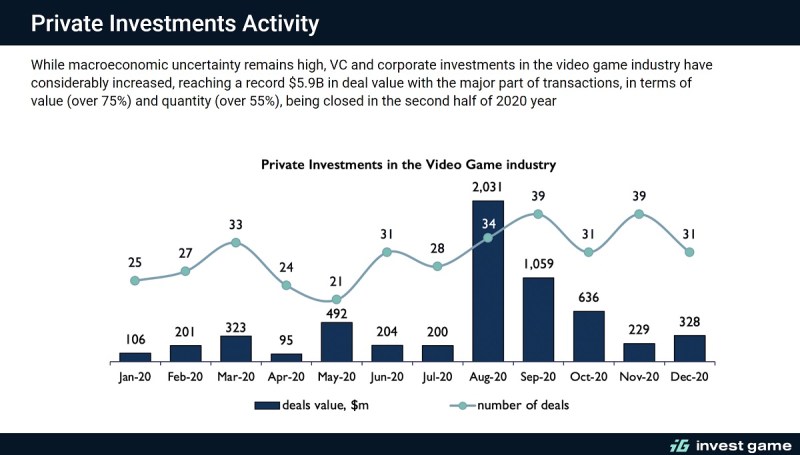 Above: Private investments in the game industry in 2020.

InvestGame also predicts more successful IPOs will happen with candidates such as Scopely, AppLovin, and Epic Games. Eight companies announced they would go public in 2020, including Playtika, Roblox, and others.

Institutional investors will continue to increase their allocations in public game companies, applying roll-up strategies. That’s something that hasn’t happened as much in the past. And so InvestGame expects a higher level of valuation multiples in both public and private markets compared to the beginning of 2020.

It could have been a very bad year. Public offerings ground to a halt in March with the onset of the pandemic, with barely $300 million raised in the first quarter. But the second quarter rebounded with $4.6 billion in offerings and a total of $15.1 billion by the end of of 2020. InvestGame’s Anton Gorodetsky said in an interview that the renewed public investor interest came from the boom that came from the growth in games as a result of people playing more during the pandemic.

Overall investment in games was strong. If you add up all of the venture capital, corporate investments, and public investments in games, the total was $8 billion in 194 transactions. The biggest investments involved NetEase, Epic Games, and Embracer Group.

If you talk about exit deals, or both acquisitions and IPOs, the total value hit $11.6 billion for 158 transactions. The biggest were Zynga’s acquisition of private Peak Games for $1.8 billion and Tencent’s acquisition of Leyou Technologies for $1.4 billion. Activision Blizzard raised $2 billion in senior notes (a form of debt). 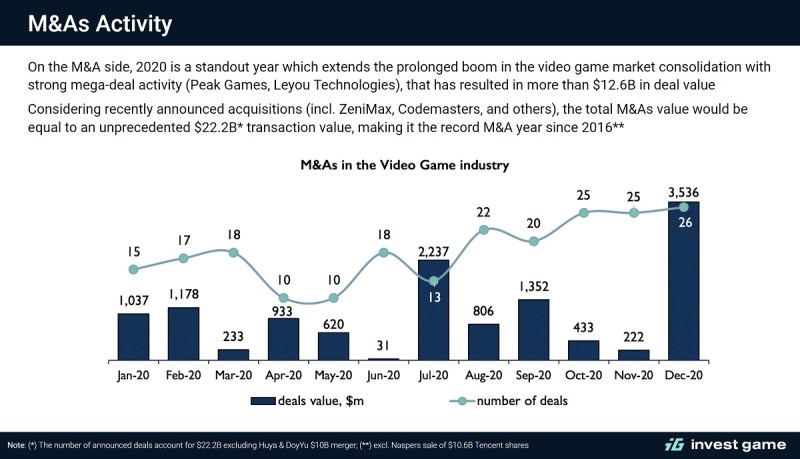 Early-stage investing exploded, with more than 30 game VC funds investing in studios and publishers. The startups raised $426 million in 107 transactions. Of those, 75 were preseed and seed rounds. Mobile gaming was the most active sector, led by a $100 million investment in Playco. Most of the activity was in the U.S., followed by Japan and the United Kingdom.

“In terms of the early-stage investments, you can definitely see the COVID impact,” Evdokimov said. “You see a sharp decrease as conversations stopped. Activity dropped in April, May, and June. And then in August, we saw a huge increase. We also had huge exits and public gaming stocks raising money as we’ve never seen before.”

Late-stage investments slowed in Q2 but bounced back in Q3, closing the year with $2.9 billion invested in 48 deals. Most of the money went into companies making multiplatform PC and mobile games. Epic Games raised $1.78 billion, while Roblox first raised $150 million and then raised another $520 million as it announced it would also do a direct public offering.

American companies dominated in late-stage deals by investing in 30% of the deals, but China accounted for 20% of those deals and led the way in terms of corporate investments.

Swedish companies are on the acquisition spree, being responsible for 31% of the total number of announced M&A control transactions in the gaming sector. Embracer Group was one of the leading Sweden-based strategic investors, with $1.4 billion announced deal value across 26 transactions. Stillfront was also active, acquiring gaming studios such as Storm8, Candywriter, Everguild, Nanobit, and Sandbox Interactive. 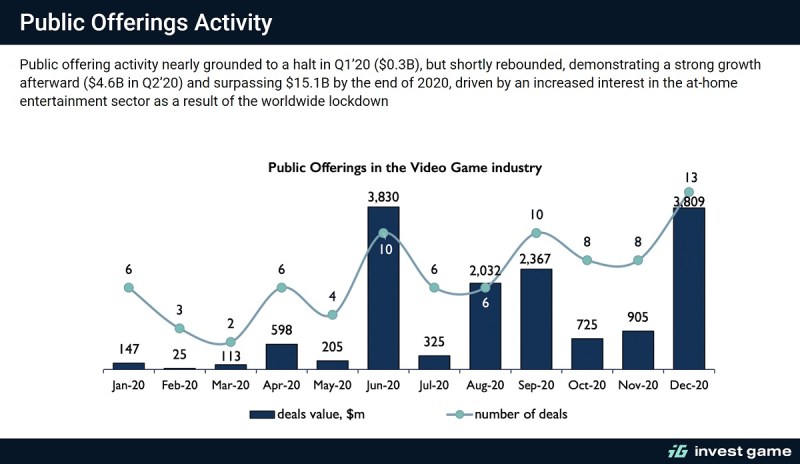 On the platform side, Magic Leap raised $350 million, while Caffeine raised $113 million for its streaming business. And Unity raised $1.3 billion in its IPO.

Esports got blindsided by the pandemic, forcing companies to shut down physical events. But the industry bounced back as it shifted to all-digital and even made progress on primetime TV. There were 59 investment deals worth $152 million in 2020. And there were 37 acquisitions with a total value of $500 million.

Will the good times end?

As for its methodology for counting, InvestGame tracks closed transactions in games and game platforms. It doesn’t include gambling or pure betting companies. And it makes estimates for some of the private deals where the amount invested isn’t disclosed. Sadly, InvestGame started tracking deals in 2020, so it doesn’t have comparison data for previous years except on a very high level.

“There was a lot of money outside the market that came into the gaming market,” Evdokimov said. “In the low-interest-rate environment, the gaming industry showed pandemic-proof behavior. That caused a lot of institutional investors to put money into the gaming funds. It’s new money.”

That carries some risk, as new money doesn’t necessarily understand games and it may flee as soon as market conditions worsen. If a newly public company misses its quarterly earnings, it could see its market value tank.

“It’s the most dynamic entertainment industry right now, even with improvements in movie production,” said Gorodetsky. “People are infatuated with gaming. Sometimes new money coming into the market may not be for the best, as they don’t understand the process of game development. They may expect returns ASAP. We might expect some confusion. I believe we’re in for some correction.”

That’s where InvestGame (and GamesBeat) hope to contribute a better understanding of the market. As an example, Evdokimov noted the selloff that happened when CD Projekt Red published Cyberpunk 2077 and got criticized for having too many bugs.

A correction also may not happen yet because gaming habits are changing. New people are becoming players. App Annie noted that it takes about 66 days for people to form lasting habits. The pandemic has gone on so long that new gamers may now be accustomed to their gaming habits. That’s why App Annie believes that mobile gaming will grow 20% in 2021 to $120 billion.

“Even if lockdowns end in 2021, it will probably take months for different regions,” Gorodetsky said. “I believe that 2021 will not be the year that gaming gets a super correction.”