Mass Effect: Legendary Edition is coming soon, and it’s looking promising. Electronic Arts and developer BioWare are launching the remastered trilogy for PC, PlayStation 4, and Xbox One on May 14. This will give players a chance to play through all three original games plus all of their downloadable content in one place, with improved visuals and gameplay.

Here are the basics:

“One of the things we were looking at were [changes to] story and character, but that’s so much a part of your memory of this that we took that off the table very quickly,” Walters said during an online video presentation. “We wanted to focus on two things. Let’s get this ported and brought over to the current generation of consoles, and get it set up for forward compatibility. And then at the same time, bring up all of the visuals up.”

But BioWare also wanted to polish the way the games feel so the experience is more consistent from Mass Effect through Mass Effect 3.

What does all of that mean? Let’s get into it.

For the developers at BioWare, remastering Mass Effect was unlike working on new games.

“As an artist, I think in some ways a remaster project is kind of a dream scenario,” environment and character director Kevin Meek said. “You could imagine in a regular development cycle where you’re nearing the end of the project, left narratives all locked, and the Project Director goes like, ‘OK, great job, but also you have a few more months, and you can go back in and polish all your levels and characters and particles and UI and — oh, by the way, consoles are 10 times more powerful than we thought they were going to be.’ So that is just your dream scenario that would never happen in real life — but how amazing would that be? And what would we do then? And that’s kind of the dish we were served going into a remaster like this.”

The big, obvious opportunity with Mass Effect: Legendary Edition is for BioWare’s artists to make the games look more modern. But Meek and his team had to settle on a philosophy.

“It was important to remember that art was there to support and build the universe and to work in conjunction with the narrative team,” said Meek. “So what we really wanted to accomplish is … for you to really be able to experience that trilogy again — or for the first time — without being distracted by the art.”

And you know what is distracting? Early Xbox 360 visuals. So BioWare got to work. It used AI to upscale all the textures across all three games. The studio did this for character and environment art, of course. But it also applied the same techniques to improving the UI and visual effects.

This established a baseline for the Legendary Edition, and then BioWare began polishing that framework. But the studio didn’t simply put every asset into an assembly line for improvement. Instead, the team began breaking down each moment in a search for anything that didn’t look right. The artists would then take a pass at those lists and slowly raise the average quality of the game. The final result is a significant upgrade for the first Mass Effect. 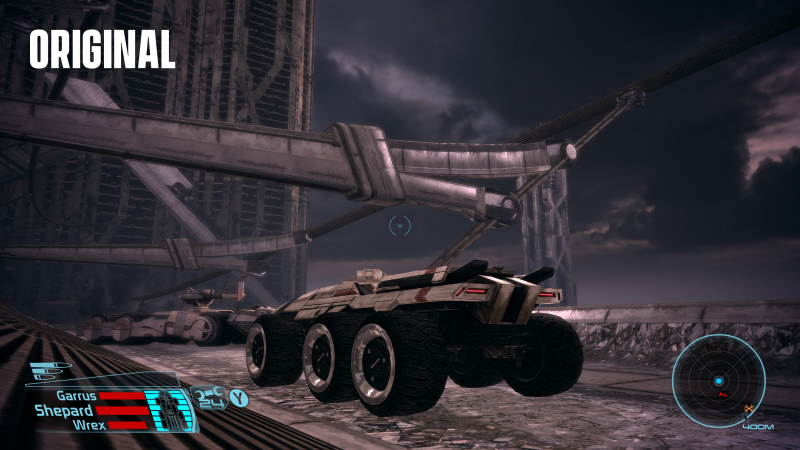 But BioWare also made some key other improvements. The studio revamped how aiming works with a stickier auto-aiming functionality. Again, the team paid extra attention to the original Mass Effect. While Mass Effect 2 and 3 will seem familiar, the first game is getting an updated interface and UI. And, of course, BioWare reworked the controls for the Mako vehicle and its camera.

Finally, to make Legendary Edition feel like a more cohesive package, the dev team unified the character creator. Now your character’s look will persist more consistently from the first game and to the next and to the conclusion.