SunSpear Games is out to prove that real-time strategy can have mass appeal. And so it is creating Immortal: Gates of Pyre, an upcoming PC game that blends RTS and the multiplayer online battle arena (MOBA) genre that League of Legends and others have made popular.

Immortal is a free-to-play game based on an original sci-fi universe. It’s from a team of PC gaming fans who would like to revive the RTS genre that was once so prevalent on the platform. The team says the game comes from a strong sense of dissatisfaction with the status quo, where 10-year-old games like League of Legends can totally dominate the PC gaming market. [Update: 4:05 p.m. 3/15/21: The company hit its Kickstarter campaign target in a day].

SunSpear believes it has the know-how and willingness to change PC gaming with a new vision for competitive gaming. And Sunspear believes that if it gets the free-to-play model right, then it can bring RTS to the mainstream.

“One of the things that’s really important to us is addressing a very diverse set of gaming communities,” said CEO Kevin Wagner in an interview with GamesBeat. “It’s not that we’re trying to be one size fits all, or one tool for every job. We really believe that there is a way to create games that are very inclusive, for everybody to be able to play, whether it be casual or pro players.”

He added, “We don’t believe that, that making things easier to play for casual gamers reduces the skill ceiling for pro players. And we’ve proven that in our game design. We’ve worked with lots of pro players and casual players to be able to verify that.” 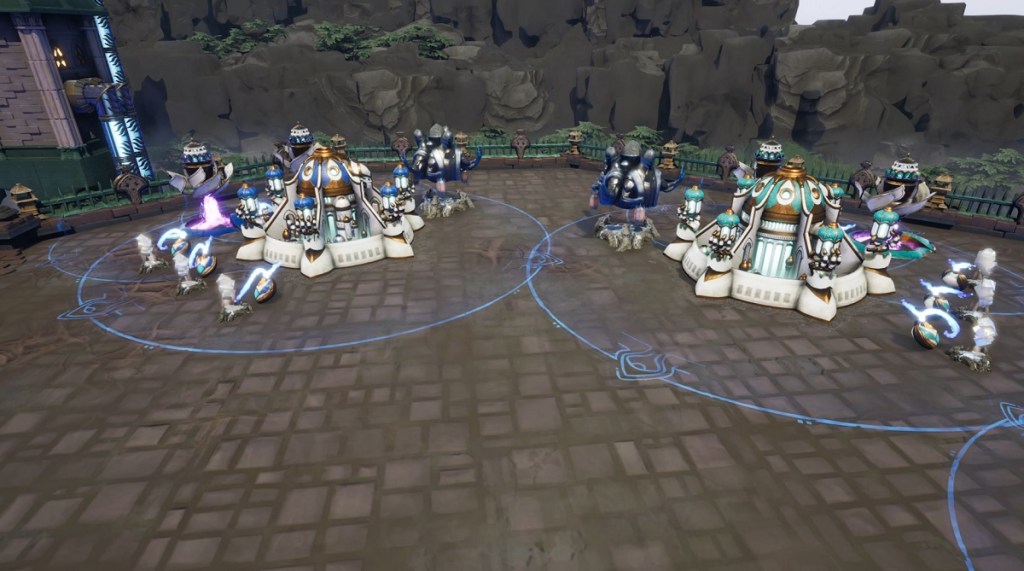 Wagner said that while MOBAs are a kind of variant on real-time strategy, they enjoy far greater reach and success. MOBAs are inherently social, while RTS games were often solitary experiences with lengthy single-player campaigns. Many RTS titles don’t balance the play with teams in mind, while Immortal’s commander system and factions are designed for team play.

MOBAs also provide an early game with clear objectives and room to experiment and make mistakes without losing the entire game. This is a rarity among traditional RTS titles. While Immortal preserves that awesome “strategic sandbox” gameplay that makes RTS special, the designers have taken care to ensure players can experiment with strategies, succeed or fail, and then try something new inside the span of a single game. This stability, combined with a social element, gave MOBAs the ability to onboard players in a more accessible way.

MOBAs also got rid of the chore of creating workers or bases before the combat started. RTS titles put players through a lot of hoops before they smashed armies into each other. In MOBAs, players shopped for upgrades in the midst of the game and condensed the controls into a single bar of spells.

Immortal tries to make commanding an army as easy and intuitive as controlling a MOBA hero. It has also streamlined basebuilding, macro, and economic management, so players can get straight into the core experience of the game, Wagner said. Players get to choose their own playstyle and experiment in the battle. And in contrast to MOBAs, you get more freedom to roam the map and shape the environment. And Immortal matches can often be played within 30 minutes. 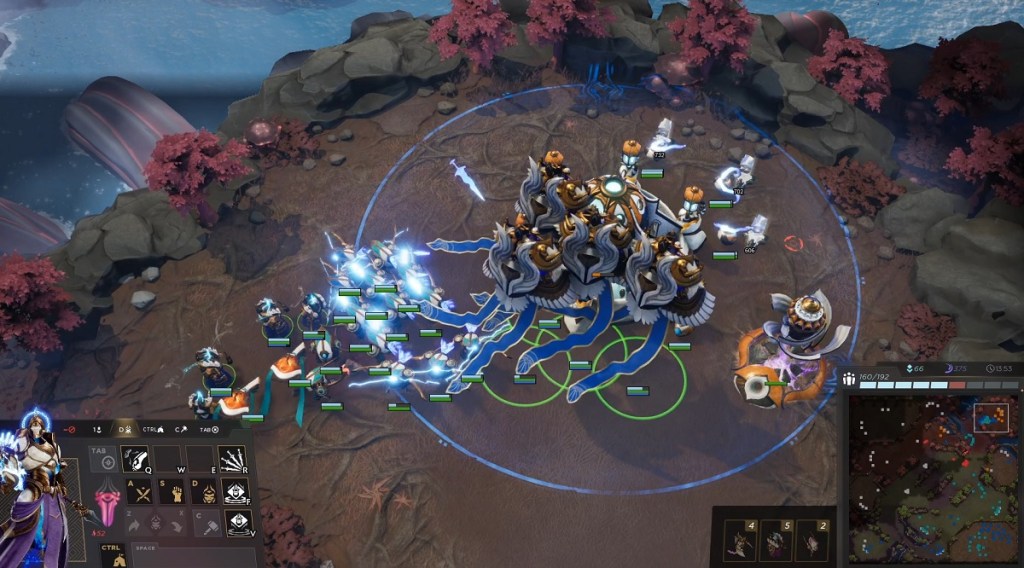 Above: Attacking a fortress in Immortal.

The company was started in 2010 by college students Colter Hochstetler and Dylan Kahn, who loved competitive games like StarCraft: Brood War and the then-upcoming StarCraft II: Wings of Liberty. They argued about the merits of StarCraft II and what it might have been, and that drove them to come up with first mods for the game and then their own original title.

Hochstetler and Kahn sought to make a game that mechanically fulfilled what they were yearning for, but also addressed many of the ludonarrative shortcomings they were bothered by as well. The two leaders enlisted cofounder Travis Toler, creator of StarCraft II mods Starbow, and Hochstetler and Kahn — creators of the OneGoal mod — joined forces and began designing and iterating, collaborating with other modding teams active at the time.

Immortal evolved as a series of mods, developed meticulously over the next seven years, for both player-versus-player and player-versus-environment modes. Its creators tested and implemented design principles they believed to be critical for making the game more accessible to a casual audience — the kind that became enamored with League of Legends — as well as hardcore esports players. The team kept revising the game, even as StarCraft maker Blizzard Entertainment stalled in its development of new RTS games in favor of titles like Overwatch.

A full decade later, the game is coming together, and Immortal is on the verge of being ready to harvest, said Wagner. All along, the company has stayed accountable to the mod community. 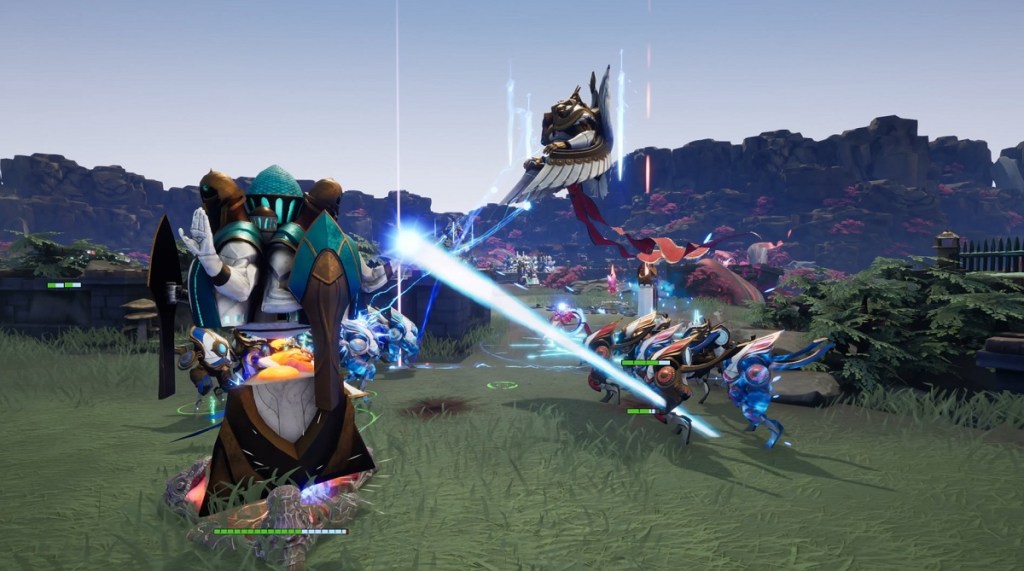 Above: Sunspear has created hundreds of pages of lore for Immortal.

Each player has a choice of deploying 12 different kinds of units on the battlefield with a top-down view, said Tom Labonte, a former Blizzard influencer and user experience lead at SunSpear. The game features god-like commanders who bear the Immortals title, leading armies into battle from their nations across the three worlds of Nuath, Shael, and Xur. Wagner said the heft of the world is akin to Warhammer 40,000.

In Immortal, units move smoothly in a group while moving. They stay together as a group, but spread out enough while moving through areas like choke points. The units can also spread out more than they would in tightly controlled MOBA games.

“I felt that a lot of the content was really focused on high-level players and noobs didn’t have many resources,” said Labonte. “So I focused on making a video game and basically executing on all of the ideas that I was attempting to get Blizzard to implement in StarCraft II.”

The Immortal commanders can make sweeping changes to their armies, replacing two of the units with elite troops, and the Immortals can also launch spells, so long as they have the resources to do so. The game also has a fully functional economy, base building, jungle creep fighting, and army construction across all major unit types (melee, ranged, flying, special abilities, etc.). But the team has taken out tedious things, like building a worker every 10 seconds or building a base, and focused on the action. Over time, each faction will have multiple Immortals and elite units and different spells, creating the opportunity for a huge variety in gameplay.

“One of the things that we’ve done is developed a tremendous amount of story and lore, with huge worlds for the game to live in,” Labonte said. “We have a couple of hundred pages of story lore around the setting that Immortal resides in.”

On the multiplayer side, the company zeroed in on 2-versus-2 battles. The company hopes to launch three to four new Immortal characters per year, which also unlocks new factions. A battle pass system will give players rewards in the form of more lore about the world. That follows some of the patterns set by Riot Games with League of Legends. 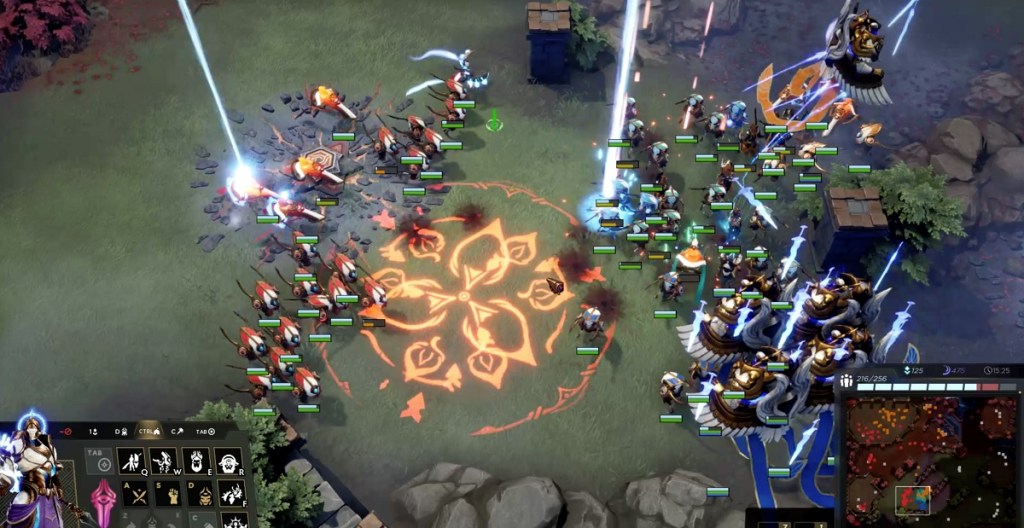 Above: SunSpear’s Immortal is a free-to-play game coming in 2022.

SunSpear Games believes the multiplayer game is a unique MOBA/RTS blend built for the PC on the Unreal game engine. It has rivals such as Frost Giant Games, which is also positioning to fill the gap in the market left by the absence of new StarCraft games.

But SunSpear Games isn’t rushing into the market. Hundreds of people are playtesting the game in the mod community, and the core team has been playtesting for about six years. Wagner has been on board for the past 18 months and he has filled out the team. Kahn, Hochsteler, and Toler have been there from the beginning, creating the game from scratch.

“There are some things that we borrow from League of Legends and from Starcraft II,” Labonte said. “Starcraft II has very intuitive action. When you see a huge army blown to the ground by mortars, you can tell very easily what’s happening on the screen. League, we think, has done an excellent job of creating a great social experience, and also building larger-than-life personalities. And that’s what we have coming out in our Immortals. We’ve made a million mistakes, but we’ve arrived at the gameplay that works.”

Wagner was a game developer for Sega in the 1990s, and he was also an executive at tech companies such as Advanced Micro Devices and Toshiba. He came in 18 months ago to help get the company off the ground once it had the gameplay. The company has 32 people working on it full time, and it has an external team working on cinematics, which should help visualize the story.

SunSpear’s financial backers and advisers include Victor Goossens, the founder of esports organization Team Liquid; Anna Prosser (a top esports media personality); and Chris Loranger (the president of esports for The Kraft Group). The team has both gameplay and esports advisory boards.

While it’s been in the works for a decade, Wagner said Immortal is still in early development. The company has raised nearly $2 million, and it is raising a new round now. The game will have a Kickstarter crowdfunding campaign soon, and then it will have an open beta in 2022.

“While we’ve been working for a very long time, we’ve very much kept it under wraps,” Wagner said. “We’re trying to build a good foundation and take it slow.”