Roblox, the platform for user-generated games, will go public through a direct listing of its shares on March 10. The company also reported that it lost $253.3 million on revenues of $923.9 million for the year ended December 31.

The San Mateo, California-based company original planned for an initial public offering last fall, but it postponed that plan and raised $520 million in funding from private sources instead at a valuation of $29.5 billion. And now it shifted plans from an IPO to the direct listing, where the company’s shareholders will sell shares but the company itself will not raise any new capital.

Skillz, which turns games into skill-based cash reward competitions, went public on December 17 at a $3.5 billion valuation through a special public acquisition company (SPAC). Playstudios and Nexters are also planning SPACs. Games have become so hot that it’s hard for Roblox to determine the right price for an IPO.

Roblox’s plan to list earlier were held up by the Securities and Exchange Commission, which asked for accounting changes on the sale of virtual currency, Robux, which is how the company generates revenue from its users. Players purchase Robux and spend the money in games generated by users themselves. Roblox keeps 30% of the revenue and shares the bulk with developers. 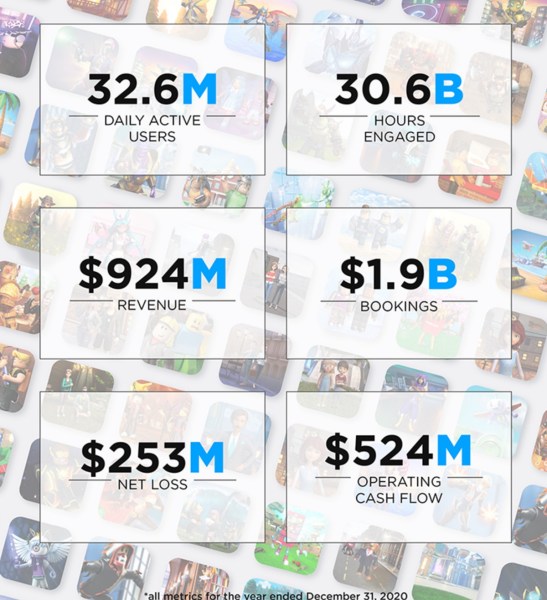 The direct listing method has been used by Spotify and Slack, and it saves money on fees paid to investment banks in IPOs. Roblox will trade on the New York Stock Exchange under the symbol RBLX.

The company said revenue grew 82% last year to $923.9 million for the year ended December 31. Bookings more than doubled to about $1.9 billion. But the company lost $253.3 million in 2020, wider than the $71 million lost in 2019, thanks to a big increase in expenses for infrastructure, sales, safety, marketing, and research and development.

In the year ended December 31, 2020, users spent 30.6 billion hours engaged on the platform, or an average of 2.6 hours per daily active user each day. Over the same period, our users explored an average of around 20 different experiences on the Roblox platform per month.