“There’s a lot of momentum, and a lot of money coming in from different sources,” Soltys said. “Companies are starting to scale up.”

But before we get too excited, it’s worth noting that the acquisitions were driven by one deal, which involved livestreaming and so wasn’t directly in the esports center. Tencent-owned Huya bought Douyu, a game livestreaming company in China, for $500 million. That was the biggest deal of the year in the esports space, and it accounted for the bulk of the total acquisition value of 2020. It counts as an esports deal because such livestream platforms are the primary model for distribution for esports event broadcasts.

But even with that skewed view of deals, there’s a lot of activity.

“If you look at the average raise, so there’s a whole host of new companies that are going to be unicorns, just from these rounds,” Soltys said.

All the esports deals are part of a boom for games, which saw increased engagement as people sought socially distanced activities during the pandemic when many other forms of entertainment were unavailable due to extended lockdowns. In 2020, all game mergers and acquisitions hit $21.2 billion in transaction value, up 52% in value from 2019.

Esports events were canceled, resulting in a slowdown in deals in the second quarter in particular, but the deals resumed later in the year as digital esports proved itself.

Soltys said the deals are spanning the world, occurring in places like the U.S., Bulgaria, South America, China, Zurich, Toronto, and London. Some esports companies are also growing so fast that they’re raising two rounds in a year. 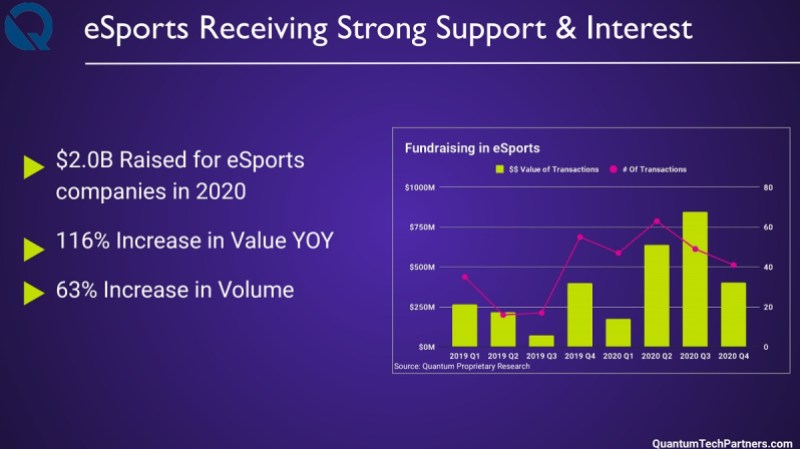 Soltys expects the M&A will continue in both games and esports, as big game companies have more than $91 billion in cash sitting on their balance sheets waiting for them to use. This doesn’t include the $1.5 billion available at game-focused VC funds, as well as other tech venture investors.

“Teams are really becoming less of an area of focus,” Soltys said. “It’s more of like all the backend technologies, the media and marketing, and livestreaming. It’s the tech layer that is getting the investment.”

There are also companies like Vindix and Nerd Street Partners that are focused on creating esports venues for fans and amateurs, even though those venues aren’t expected to be able to open until the pandemic threat subsides.

“The time for them to do that is now because all of those prices are so low for for all the real estate,” said “Everybody’s abandoning their storefronts right now.”