The weekday is the new weekend when it comes to gaming. More people are now playing games during the week than on the weekend, according to an annual report by game engine maker Unity.

The report found the difference between weekday and weekend gaming in 2020 increased by 52% in weekday’s favor. Unity said there are more than 2.8 billion monthly active users who play games or apps built on Unity, and the new report represents the company’s largest data dive on COVID-19’s impact on gaming. Unity said its survey found that 61% of game developers are using Unity, and Unity collected the data from Unity Ads, DeltaDNA, Multiplay, and Vivox.

The report said that creating new content should still be the top priority for game developers. On average, large new content updates for live multiplayer games resulted in peak concurrent user spikes of over 11%.

Making cross-platform, multiplayer games will be important. Success in 2020 came from experiences that spanned all platforms, unlocking the ability for players to come together no matter what system they owned. As we move into 2021, 96% of developers surveyed believe scalable cross-platform solutions are critical to the success of a multiplayer game. 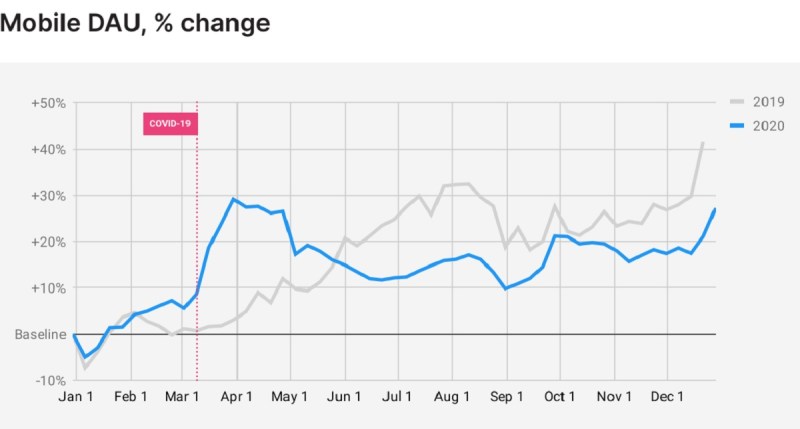 Above: Unity said mobile game users rose at first in 2020, then dropped below 2019 levels.

Lockdown didn’t create a downturn in platform games, including mobile. Mobile players are driving more revenue for game developers than ever, with day one in-app purchase increasing at the start of lockdown in March and maintaining throughout the year. Overall mobile game ad revenues in 2020 grew by more than 8%, and first-day in-app purchases rose by over 50% compared to 2019.

“It’s still too early to tell if changed habits will become the new norm once the pandemic is over, but given our understanding of past player behavior changes, it would be surprising to see many players revert,” said Ingrid Lestiyo, senior vice president of Operate Solutions at Unity, in the report.

COVID-19 had a notable impact on the way people play video games. The volume of high-definition gaming (video games on PC, macOS, and other desktop platforms with graphics typically rendered in high definition) rose by over 38% in 2020.

At the start of the pandemic, the popularity of mobile games spiked, but usage settled back down as the year progressed. However, HD games on PC/macOS held steady their initial increase, and then rose significantly during the fall and winter. 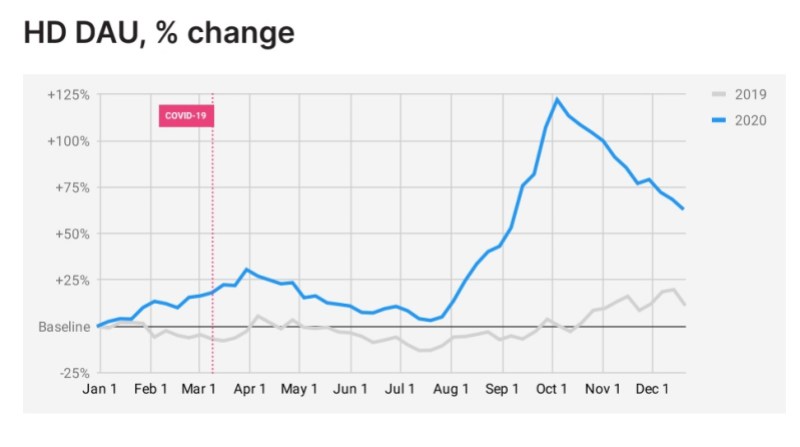 Above: HD games saw a huge boost in users over time during COVID-19.

With the onset of colder weather keeping people indoors and other forms of entertainment unavailable, HD gaming became the foremost media that many people turned to. Over the course of the year, HD gaming daily active users (DAU) increased on average by 38.27%.

A similar usage pattern emerges with stickiness, which is how often a monthly user of a game plays it daily. Mobile games fell slightly in stickiness, though their stickiness was still higher than that of HD games in 2019.

HD games, on the other hand, showed tremendous stickiness over the course of the year, and ended at an all-time high. This was likely in part due to new console launches, but also thanks to limited access to alternative entertainment. HD game stickiness increased on average by 1.82%. While that number may sound low, given that most games have stickiness of around 10%, it’s actually a very significant increase, Unity said.

First-day IAP purchases in mobile games spiked with the springtime lockdowns around the world, but quickly ramped back up during the summer and were sustained throughout the rest of the year. Typically, the revenue stays below the January 1 baseline until the winter holiday season begins in November, but 2020 set new records for the mobile game business. Over the course of the year, first-day IAP purchases rose by over 50% compared to 2019.

Above: Free-to-play games saw a big surge in in-app purchases in the pandemic.

The weekday/weekend split at the beginning of 2020 was similar to that in 2019. However, when lockdown started, the difference between weekday and weekend gaming habits greatly narrowed, especially during the summer months. They even inverted for a brief period in May.

On average, the difference between weekday and weekend gaming activity during 2019 was 1.39% in the weekend’s favor. In 2020, this difference was just 0.91%. This represents a shift of 52.7% in redistributing weekend gaming time to the weekdays.Mid- and hardcore apps saw a substantial boost during the onset of the pandemic as people found themselves with more time to enjoy in-depth gaming experiences. Over the course of the year, player behavior settled back down to 2019’s trendline.

Commuter apps, meanwhile, took a plunge and never really recovered the growth trend that 2019 indicated. When the pandemic was declared and global lockdowns started, mobile ad revenues surged, but individual effective cost per mille (eCPM) for each ad impression fell. However, as the year carried on, eCPM per ad impression steadily rose, reaching extremely strong numbers by the end of the year. Overall mobile game ad revenues in 2020 grew by over 8% when compared to 2019’s growth trend, and eCPMs grew by 5%.

As countries have responded to COVID-19 in different ways, Unity looked at countries that have already begun “returning to normal” for an indicator of the future. China was one of the countries earliest affected by the virus and made major strides in containing it. Though new cases arise daily, by the end of 2020 Chinese residents had returned to work and resumed social and economic activities (e.g., movie theaters are open), with lockdowns occurring at a local level when outbreaks are detected.

The data shows that the DAU in China returned to levels similar to those in 2019, likely because Chinese players regained the option to spend their spare hours on activities other than video games.

Upcoming privacy changes from Apple will impact gaming advertisers’ abilities to affordably acquire users. As targeting power for specific audiences will decrease, we could see a shift away from the hyper-casual games that thrive on acquiring users cheaply, then churning them quickly – it will become more problematic to rapidly launch those titles profitably. Additionally, both mobile game publishers and advertisers will face challenges as user data becomes less available to them.