January founder Noosheen Hashemi says the funding will be used to fill hires across January’s product, engineering, and operations teams while accelerating sign-ups for its health program. “We believe that every day can feel like January 1st — a day to take a fresh start towards better health — and that self-improvement is a team sport. Additionally, we’re excited to expand our footprint into enterprise, including pharma, where we already have a paying customer,” she said in a press release.

According to the U.S. Centers for Disease Control and Prevention, 122 million Americans — half of the U.S. adult population — have diabetes or prediabetes, with double-digit growth projected over the next decade. Diabetes is among the most expensive chronic conditions, with $1 out of every $7 in the U.S. health care system spent on diabetes care. And the COVID-19 pandemic highlighted how vulnerable this population is. It’s estimated that as many as 40% of Americans who died of COVID-19 had diabetes.

January was founded in 2017 by Hashemi and Michael Snyder, the director of genomics and personalized medicine at the Stanford University School of Medicine. The two founders assembled a a multidisciplinary team of computational, food, translational, and medical scientists to tackle what they saw as unmet needs in people with or at risk for developing diabetes.

January adopts a “multi-omic” approach to chronic disease management, incorporating wearables and microbiome data to make health recommendations that address hyperglycemia. For instance, in a study presented at the 2020 American Diabetes Association Scientific Sessions Conference, the company used heart rate and continuous glucose monitors to associate the reactions of 1,022 people on the diabetes spectrum with the glycemic load of the foods they ate. Seventy percent of all participants improved their time-in-range — the amount of time their blood glucose remained within a healthy zone — including 58% of individuals with the highest blood glucose levels.

According to Hashemi and Snyder, the study’s findings led to January’s machine learning algorithms that predict glucose response for 33 hours in people with type 2 diabetes. After 4 days, the algorithms learn an individualized model, and can ballpark the amount of activity needed to bring down a glucose curve. 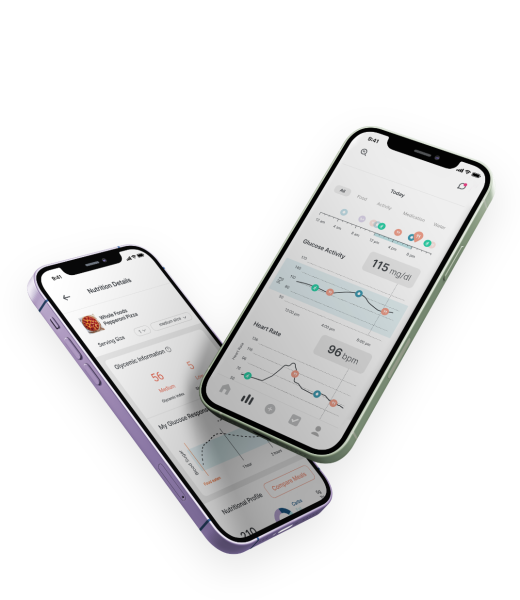 January offers a $488 subscription wellness program, Season of Me, that includes a telehealth screening with a physician, 2 continuous glucose monitors, and a 90-day membership to the January app. Season of Me gives customers insights on how diet, exercise, and sleep affect their blood sugar, for example, suggesting which foods to avoid and when a brisk walk or run might bring a person back into the healthy zone.

January says it also works with pharmaceutical companies to investigate how metabolic disease drugs might be affected by lifestyles and physiologies. As with individual patients, the company’s platform synthesizes food, heart rate, and more data for analytics, which January claims can provide associative, prognostic, or predictive power to control for clinical trial imbalance.

Beyond pharma partners, employers can work with January to gain access to the company’s atlas of over 16 million foods, complete with glycemic index, glycemic load, and glucose response data. Via an API, they’re able to deploy its algorithms to predict personalized glucose response and provide exercise prescriptions to counteract blood sugar spikes.

January estimates the potential per-member cost savings for its enterprise customers to be around $850 to $1,400 per year.

“While other companies have made headway in understanding biometric sensor data — from heart rate and glucose monitors, for example — January has made progress in analyzing and predicting the effects of food consumption itself,” Aydin Senkut, founder and managing partner at Felicis Ventures, a January investor, said in a press release. “Understanding what people eat is key to addressing metabolic health and chronic disease. Aggregating a food atlas of 16 million items, including local restaurant menus, January has used machine learning to create nutritional labels and glycemic index for everyday foods Americans eat, turning food into actionable health data.”