Publisher Square Enix and developer People Can Fly are releasing a demo of their Outriders RPG shooter today in advance of the game’s release on April 1.

The demo is three hours, starting with the campaign’s opening chapter ( which you can play solo or co-op with up to three players). It should give you a good idea of what you’ll encounter in the science-fiction game.

Players can create multiple characters and try out all four classes : Devastator, Pyromancer, Technomancer, and Trickster. You can level them up and access a wide array of weapons. Progress in the campaign will transfer to the full game for players who purchase Outriders on the same platform.

The game takes inspiration from Joseph Conrad’s novella Heart of Darkness and the film Apocalypse Now. It doesn’t follow the plot of these closely, but you’ll get the sense of a descent into darkness on the journey, said People Can Fly creative director Bartek Kmita in a press briefing. It’s a far cry from the lighthearted Bulletstorm that People Can Fly launched in 2011, as people inside the company grew up and wanted to try something new, Kmita said.

“We never intended this to be our version of Apocalypse Now on a different planet,” Kmita said. “People are finding some similarities. We never had the aspiration or will to copy things in this game. We have our approach to a different subject.” 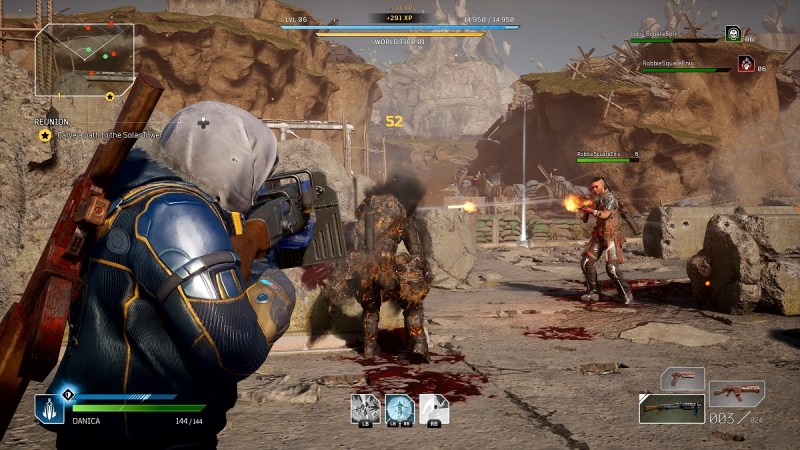 Above: Outriders is a co-op shooter.

The demo is available now on PlayStation 5, Xbox Series X/S, PlayStation 4, Xbox One, and PC/Steam and GeForce Now. Outriders will release on those same platforms on April 1.

The characters are among the forces you can play as you try to survive on the hostile planet of Enoch, where you are tracking the source of a mysterious signal. Players can pick up missions or sidequests in a central hub in a city. You will leave the slums and shantytowns of the First City and traverse forests, mountains, and desert to find the signal.

“It has more dark content,” Kmita said. “I wanted to go this way. It’s definitely new work for People Can Fly.”

You play aggressively in the game. Much like with id Software’s Doom Eternal game last year, you have to kill to heal yourself. The game promises the intensity of a shooter and the depth of an RPG.

“We want to give the player as much choice as possible to do what they want,” Kmita said. “There are different games in one game.”

I like the Pyromancer, who can use a flamethrower or send a spike of flame at enemies from a distance. That softens them up so that you can strike with your guns. 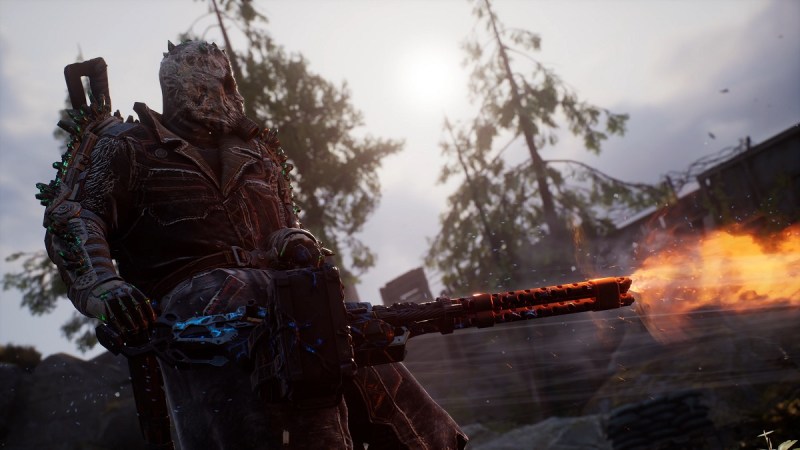 Above: Some just want to watch the world burn. Even if it’s an alien planet.

With capabilities like Gravity Leap, you jump into the air and hover. Then you can target an enemy and slam down on them and knock out the enemy and others nearby. You can use it to interrupt bosses from executing their big attacks, but it has a cooldown. You can also use Reflect Bullets, which is a shield that stops bullets and protects your team from incoming attacks. You can send those bullets back at enemies.

With the Impale power, your Devastator can target an enemy and stop them by impaling them on a stone spike. Another power is Endless Mass, which is like a personal black hole. You can draw a group of enemies into a clump, where you can blast them. You can use these powers in combos as well.

The levels are fully designed and do not have procedural content, said Piotr Nowakowski, lead game designer, in a press briefing. That was something that the team learned while making Bulletstorm, he said.

You’ll be able to play co-op multiplayer in the demo. The game was delayed from its original launch date in December, and then once again pushed back to February before finally being set for April 1, but Kmita said the team didn’t finish everything on time and so had to push the date back. The delay wasn’t due to the release of the demo.

Asked if there will be more classes of characters or expansions, Kmita said, “That will be up to players and how they react.”