“You’re in a world based on the motto that behind every avatar, there is an enterprising human who can expect nothing but surprises. It’s a place that will be shaped by the interactions of thousands of avatars, a place that constantly evolves. … It all adds up to a whole new kind of entertainment and an intriguing world that’s just plain difficult to leave.”

So says the 1986 promo video for Lucasfilm Games’ groundbreaking Habitat.

Gaming and the metaverse have been intertwined since the beginning, but the metaverse is far more than a game. “Metaverse” denotes a virtual reality-based successor to the internet filled with real-world metaphors and rampant opportunities for digitized entertainment, social bonding, and enterprise.

To those familiar with Snow Crash or Ready Player One, the metaverse sounds like science fiction. It’s not. Year by year, piece by piece, the march from Habitat to a fully realized metaverse has advanced, fueled by gaming, social media, and an increasingly digital economy.

And the pieces are all nearly in place.

Unfortunately, though, adoption rates can vary immensely by income and geography. The adoption rate for the internet, while nearly 100% in much of North America and Europe, is still below 30% in developing countries around the world. 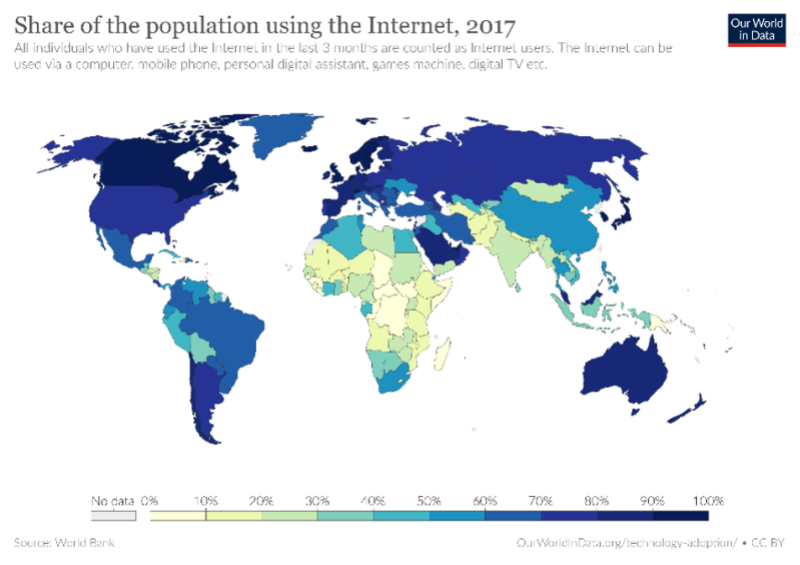 A fully realized metaverse needs a global population, not only for a richer community and deeper economy, but also to ensure that everyone around the globe can benefit from what could be the equivalent of the “information age.” The metaverse is an always-on digital space where people can come together and interact, engage, barter, and build and strengthen relationships. It’s a digital version of life as we know it, but existing on the back of the internet.

A global metaverse requires global internet availability and low-latency infrastructure. High lag and packet loss crushes gaming experiences, and it will do the same to virtual world immersion. Imagine interacting with someone on the metaverse and being met with lag after lag. That’s not an ideal experience, and it’s one that will need to be solved to connect the world.

Organizations like Subspace are developing tools that enable game publishers to improve network performance. Subspace in particular has made its name in enabling network control for game developers with a full-stack platform and network infrastructure that not only remedies poor network latency, but also addresses network repair, security, and network intelligence.

While Subspace targets its technology at game publishers today, it seems likely that these publishers will be some of tomorrow’s primary metaverse architects. In other words, in bringing better gaming to more of the globe, Subspace is also enabling the coming global metaverse to be a more natural, seamless experience.

Game experiences are eating the world

A host of trends and social pressures are gradually bringing the metaverse into fruition, beginning with gaming becoming the world’s dominant form of entertainment. Venture capitalist Matthew Ball wrote an insightful blog piece on this thesis, but we can spotlight a few of his points.

In all cases, gaming trumps conventional content and is consuming its following.

Gaming is eating the world.

In March 2019, Wired did a stellar job of characterizing the “mirrorworld,” a 1:1 digitization of the real world that might feel familiar to users of Google Earth or Pokémon Go. The mirrorworld is reality overlaid with digital (augmented) reality, often called AR, and it’s getting increasingly more engaging and convenient to create. For example, Snap has its Lens Studio software, which allows anyone to digitally transform everything from faces to landscapes in real time. The phone screen becomes a camera-driven window onto an alternative, fantastical world. Snapchat Lenses have become so popular that 170 million users enjoy them daily. Naturally, Google has its own AR overlay platform, as do Apple and others.

The race is on to let users digitize and transform their worlds.

From AR, it’s only a short hop into virtual reality (VR), such as the Horizon world (currently in beta) from Facebook/Oculus, in which users can create their own environments, games, and social experiences. Such digital places may or may not be mirrors of real-world locations. While the use of a VR headset may be relatively novel, massive virtual universes are not. Options already include Avakin Life, Mozilla Hubs, IMVU, and, since 2003, Second Life.

Money makes the metaverse go ’round

Anyone who has bought a music MP3 or a movie on Prime Video, never mind game DLC or character skins, understands how natural it is to buy digital goods. Digital wares have all the value of physical items. However, physical goods are harder to copy/paste, and piracy remains a barrier to growing the economy for digital products. Until this problem is solved, business won’t blossom in the metaverse.

Non-fungible tokens (NFTs) are unique digital items that are non-divisible and potentially gain value on the basis of scarcity. They are part asset, part digital certificate of authenticity. NFTs are blockchain-based (often using Etherium), which allows independent verification of authenticity and value, and they can be moved across different online systems.

Some games are now based on NFTs. Tradestars is a particularly interesting title that blends sports knowledge with fantasy stocks and Ethereum cryptocurrency, which is convertible to real-world cash. Even artwork now embraces NFTs. In early February, the Hashmarks digital artwork collection sold for a quantity of Ethereum worth roughly $9 million.

If digital art is worth that much, why not digital real estate?

Even back in 2006, Ailin Graef had amassed a $1 million business through her Second Life real estate services. Similar tycoons pop up in other fledgling metaverses, including Decrentraland, which raised $24 million and launched in February 2020. Decentraland is user-owned and leverages an Ethereum-based token economy for buying virtual land and NFT goods. Land owners have complete control over their parcel, which can host items such as billboards showing advertising videos linked to the real world thanks to in-world apps called metas. If you doubt whether such virtual bits could intersect with reality, know that Samsung’s Blockchain Wallet, which launched on Galaxy S10 phones, supports Decentraland.

When will we reach the metaverse?

Obviously, a mainstream metaverse hasn’t reached a billion users yet, but you can feel the momentum building. We’re getting closer.

There are many small metaverses today.

All have their own unique characteristics, but one of the deciding factors behind which will thrive will be the reach of their underlying infrastructure. The quality of the platform’s connectivity will play a key role. Additionally, by having metaverse platforms that extend high-quality connectivity to every corner of the globe, the metaverses that matter can become places of global equality and representation, where all voices can mingle and all participants have a chance to benefit from this brave new virtual world.

For a deeper dive into how Subspace, game publishers, and gaming are shaping the future, see our post “How Subspace Plans to Accelerate the Rate at Which We See a Metaverse.”

Nikki Shum is Head of Marketing at Subspace.