Game livestreaming will grow 10% in 2021 to 728.8 million viewers, according to a report by game and esports data firm Newzoo.

As with most online games, lockdown measures resulted in spiking livestream viewership across all platforms. More consumers were — and still are — confined to their homes, driving them to spend more time on platforms like Twitch, YouTube, and Huya.

The pandemic has certainly accelerated — and will continue to accelerate — the livestreaming audience, but Newzoo expects stabilization once the pandemic subsides.

To that end, audience growth rates will progressively return to their more natural levels by 2024. Nevertheless, emerging markets and regions will stay on their path of double-digit growth.

This growth will also be driven by mobile gaming’s popularity in Latin America, the Middle-East and Africa, Central Southern Asia, and Southeast Asia. Countries in these regions (especially China) are pushing the streaming audience ever-closer toward the one-billion mark — a feat that seemed unfathomable even five years ago.

China’s streaming ecosystem is vastly different from the West’s, and the report delves into some of those differences. 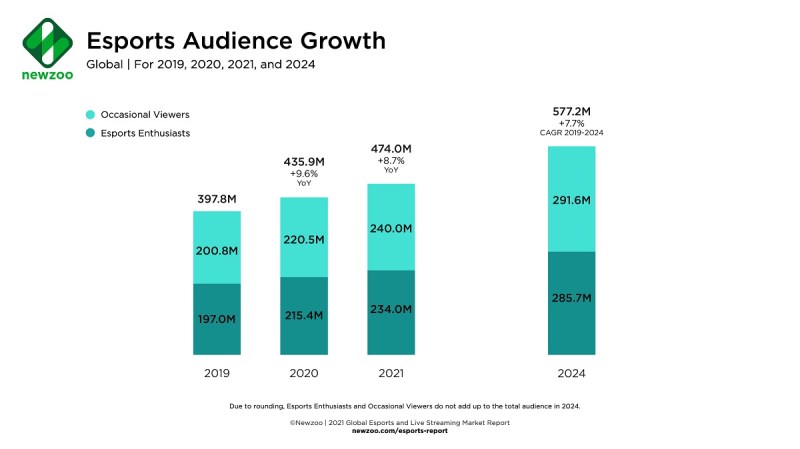 Above: The growth rates for the esports audience.

The global esports audience will grow to 474.0 million in 2021, a year-on-year growth of 8.7%. Esports enthusiasts (those who watch more than once a month) will account for just under half of this number (234 million).

Like in the steaming ecosystem, growth markets will drive much (but not all) of esports’ future audience growth. Ongoing infrastructure developments are continuing to empower residents in these areas. Another factor in the strong audience growth is mobile, which has now entered the upper echelon of the esports market. 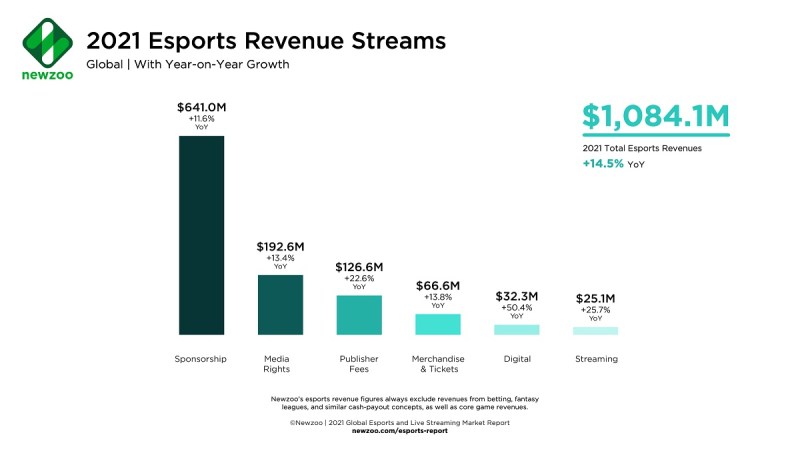 Above: The revenue streams for esports.

In 2021, $833.6 million in revenues — over three-quarters of the total market — will come from media rights and sponsorship.

The instability caused by the pandemic, however, has negatively impacted some key esports revenue streams. The cancelation of in-person events diminished ticket revenues while also having a secondary effect on merchandise across the board.