AMD is in the fight for computer graphics, and the Radeon RX 6700 XT is more proof of this. But the GPU is perhaps even better as evidence that supply and demand for video cards is so out of balance that pricing is almost meaningless.

The company’s latest GPU is launching March 18 for $479. That puts it between two of Nvidia’s best new video cards in the $499 GeForce RTX 3070 and the $399 RTX 3060 Ti. The good news for AMD is that 6700 XT is well positioned between those Nvidia options when considering the price. And if you have a recent Ryzen system, Smart Access Memory gets you even better performance. 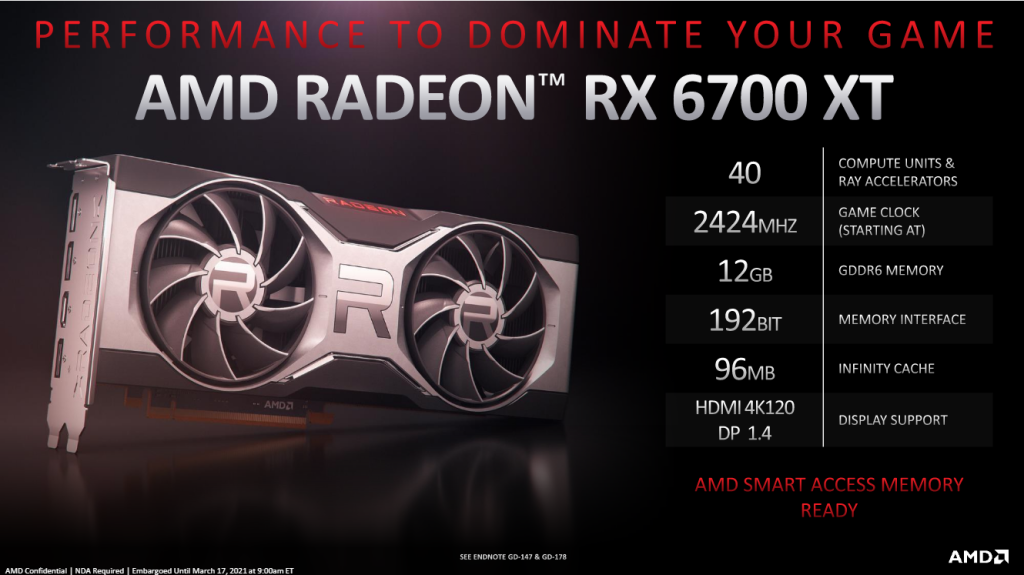 AMD is positioning the Radeon RX 6700 XT as the ideal GPU for 1440p gaming at max settings. If you want 4K, you have options like the powerful 6800 or 6800XT or the RTX 3080. The 6700 XT has 12GB of video memory, and AMD claims this makes all the difference — especially in that 1440p sweet spot. And the company isn’t simply claiming this will get you 60 frames per second — it says this video card is ideal for high refresh rate monitors at 1440p.

And that is what I wanted to test.

Does the Radeon RX 6700 XT have the horsepower to drive modern games at 120+ framerates while rendering 1440p with max settings? And, of course, the answer is often no. Some of the biggest blockbuster releases, like Watch Dogs: Legion and Microsoft Flight Simulator, are just too demanding. And yet the results were often still very impressive.

So let’s AMD’s big performance claim for the 6700 XT. How is this thing at 1440p? I’ll have more head-to-head testing with NVIDIA soon.

For my non-SAM tests, I used the following bench system:

And here are the results: 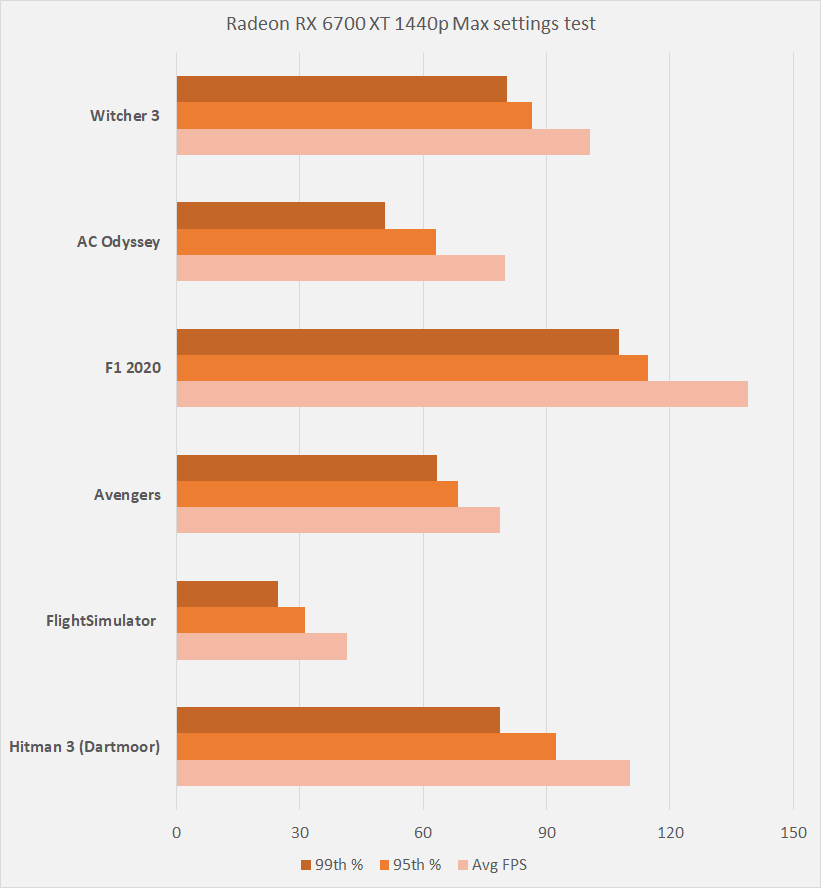 As a baseline, these are impressive numbers. And you can see that the 12GB really does make a difference in games like F1 2020. And yet an average of 120 frames per second is still rare — at least in this test suite. But I am happy that games like Witcher 3, Hitman 3, and F1 2020 get to a 90 FPS average and beyond. This is especially important if you are pairing the 6700 XT with a FreeSync display that can handle a framerate bouncing between 60 FPS and 144+ FPS. A high-refresh rate FreeSync monitor will minimize stuttering and get you all of the benefits of a game that is rendering faster than 60 FPS.

But what about if you turn Smart Access Memory on? Well, the difference is notable.

And here are the improvements: 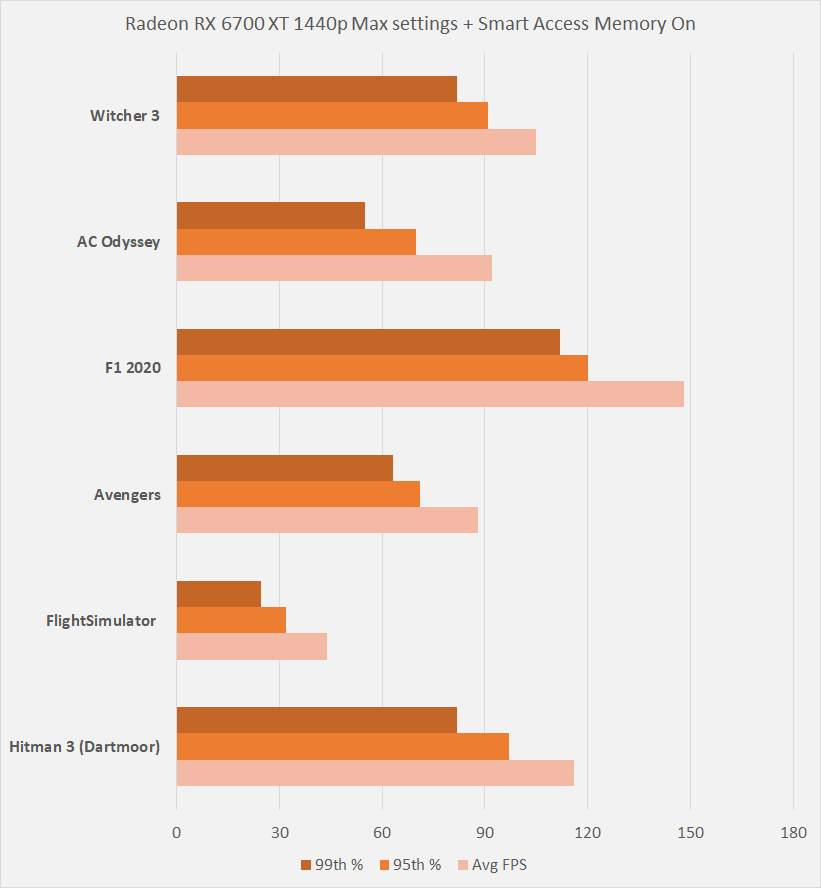 SAM is an undeniable advantage for AMD at the moment. The technology’s generic name is resizable BAR, and it’s a built-in standard of PCI Express. But it requires everything in the chain between CPU, GPU, and motherboard to work together, and that is where AMD has an advantage. The company has made an effort to ensure that all of its recent GPUs and CPUs support the tech out of the box, and it’s ensured that motherboard vendors are doing the same. And the reality is that if you want this extra 3%-to-12% of performance, you’re better off pairing a Radeon with a Ryzen than trying to get Intel and Nvidia to play together. And that’s before you get into the many benefits of going with a Ryzen CPU in the first place.

If the computer graphics fight was still the same one AMD and Nvidia were fighting through most of the 21st century, the 6700 XT would easily hold its own. But things are not that simple. Nvidia’s RTX 3060 Ti and RTX 3070 both outperform the 6700 XT in ray-tracing workloads. And Radeons do not have a technology like Nvidia’s deep-learning supersampling (DLSS) AI-upscaling.

And while you may not yet care about either of those today, you likely will over the next several years. Ray tracing is showing up in more often, and it’s something that developers want to implement in their games. And AMD’s cards are simply slower at rendering this light-simulating feature than what you get from Nvidia.

Perhaps even more important is a lack of a DLSS competitor. DLSS enables GeForce RTX cards to use machine learning to rebuild a 4K image out of a 1080p render in real time. This solves all kinds of problems. For one, it makes ray-tracing games playable at 1440p and 4K framerates. But DLSS also goes right to the heart of AMD’s pitch for 6700 XT because it enables significantly higher framerates at max settings often in even more affordable video cards.

The drawback of DLSS is that developers need to implement it. So if you play a game that doesn’t have DLSS, then you’re stuck with raw processing power. And that is where the 6700 XT shines.

My high-level take on the current GPU battle is that you really cannot go wrong. Video cards are still incredibly difficult to find, and I don’t think you need to wait for the perfect one. If you find yourself with the opportunity to purchase a 6700 XT, and it’s within your budget, you should go for it. Its gaming performance is undeniable. It will serve you well if you are gaming on a 1440p monitor, but I think it’s even great at 4K. Its shortcomings are situational at worst, and even then you will get fine ray-tracing performance if you drop the resolution down to 1080p.

The RX 6700 XT also delivers in real-world scenarios. It is an efficient design that ran quiet throughout my tests. It almost never exceeded the noise coming from the NZXT Z63 AIO cooler on the CPU. That is the benefit of TSMC’s power-efficient 7nm process.

If you’re still waiting to upgrade your GPU, the Radeon RX 6700 XT gets my recommendation — although that comes with some caveats.

I’m still more impressed with Nvidia’s DLSS, and I think that you should at least consider ray tracing when making a GPU purchase in 2021. And it’s easier to recommend you buy a 6700 XT if you find one in a world where supply has no chance of keeping up with demand. If you could find the RTX 3070 for $499, that is the obvious choice. For $20 more, you get better performance in many games along with the aforementioned DLSS and faster ray-tracing performance.

But we don’t live in a sane world, and AMD knows that. And it’s hard to argue with AMD’s reasoning behind the pricing. It has invested a lot in competing in the GPU segment, so it’s going to want to raise prices eventually. So why wouldn’t it do that now when the market has proven that it’s willing to pay a higher price for any and all GPUs.

It’s a frustrating reality, but it’s one that AMD is compelled to capitalize on for the sake of its bottom line and its stakeholders. Hopefully, some of that extra revenue goes toward improving the supply chain in the future.

The AMD Radeon RX 6700 XT GPU is available starting March 18 for $479 (ha!). AMD provided a sample unit for the purpose of this review.