You may not expect a game about divorcing parents to be one of the best cooperative experiences ever. That’s It Takes Two, though.

This is the newest game from Hazelight Studios, which also created the co-op adventure A Way Out. It Takes Two comes out March 26 for PlayStation 5, Xbox Series X/S, PlayStation 4, Xbox One, and PC. I played on PlayStation 5, roping in my older brother to be my second player.

And you need someone to play with. Like with A Way Out, It Takes Two needs two players (online or locally). That may sound restrictive, but this lets the game deliver an experience that takes full advantage of its concept.

You play as a husband and wife planning on getting a divorce. Their young daughter, who has made her own doll versions of her parents, wishes that they could be friends again. And as we all know, the wishes of cute kids must come true. The couple become trapped in the dolls and forced to collaborate as they try to make their way back to their daughter.

The premise provides for some heartstring-pulling, and it gives you a scenario in which two people who would rather not be near each other anymore must work together. It’s a good framing for a co-op game. 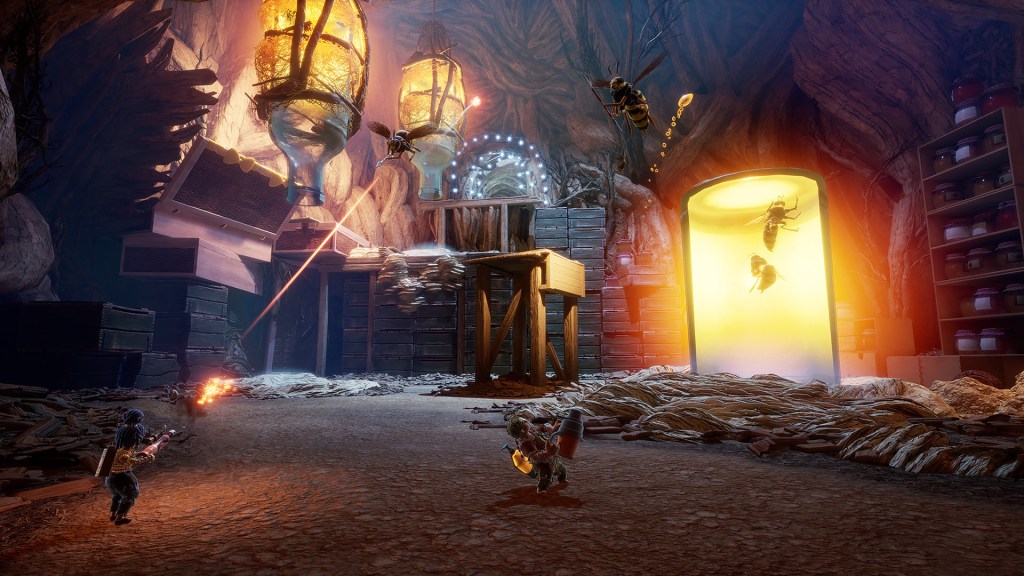 Above: Work together to kill wasps, as you should.

You’ll be spending most of your time platforming and puzzle-solving together. First off, I’m surprised by just how good the 3D platforming feels. Jumping and running is more precise here than it is in many games dedicated solely to that sort of experience.

But it’s all of those puzzles that make It Takes Two special. A lot of co-op games depend on the same tricks. They’ll have one player crank a lever that moves a platform another player is standing on, for example. It Takes Two is more creative. Early on, you’ll navigate a shed by riding through the pipes of a disgruntled broken vacuum cleaner. You’ll often need one player to aim the end of the hose while another shoots out of the tube.

It Takes Two also does a great job of giving each player separate tools. At one point, the wife has a hammer head while the husband has some nails that he can throw into wooden walls. Each tool is helpful on its own. The wife can use the hammer to break glass jars, while the husband can use his nails to make platforms stick in place. But you more often need to use them together. For example, the husband can throw the nails so that the wife can swing off of them with her hammer.

And it’s pacing is stellar. You’re never stuck on one idea for two long. As great as that nail-and-hammer section is, you’re only messing around with those mechanics for one area before you move to something new. And you’re always moving to something new, and somehow each new idea works just as well as the last. Sometimes you even run across minigames that give you a chance to take a break from the adventure and just have some goofy fun. One has you playing whack-a-mole, with the husband taking on the role of the moles and the wife doing the whacking. It’s absurd … yet strangely competitive. I was laughing almost the entire time I proved my whack-a-mole dominance to my brother. 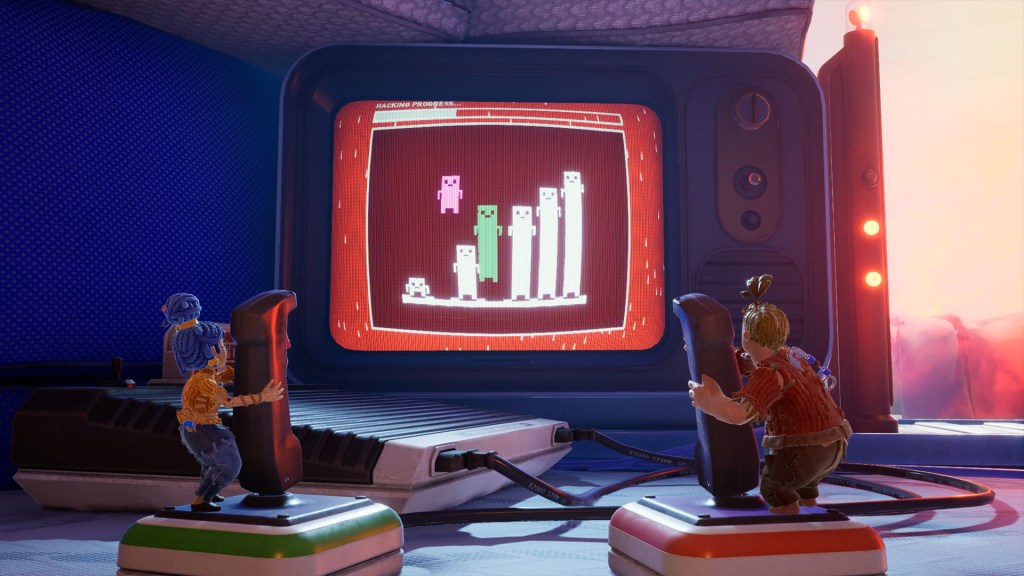 Above: The minigames are always fun diversions.

Bosses are a highlight. They take the mechanics you learn and have you use them in a tense fight. Remember those vacuum pipes I talked about before? Well, not long after that scene, you’re fighting an angry vacuum cleaner and have to work together to use his own suction to shoot bombs at his face.

It Takes Two is a just a series of fun co-op moments. It’s some of the most fun I’ve ever had with a two-player game. It’s also a pretty game, with the lighting standing out as especially impressive. On PlayStation 5, it’s a smooth 60 fps experience.

I struggle to think of another co-op puzzle game that’s better. Maybe Portal 2? Even if that’ true, It Takes Two belongs on that same tier. Find yourself a friend (or an emotionally distanced spouse) and spend a little time with It Takes Two. It’ll be some of the most fun you’ll have this year.

It Takes Two comes out on March 26 for PlayStation 5, Xbox Series X/S, PlayStation 4, Xbox One, and PC. The publisher gave us a PS5 code for this review.