India is the fastest-growing region for both apps and games in the world, while Argentina has the highest growth rate in mobile games relative to its size. This is according to a report on the global app economy by Facebook and measurement firm Adjust.

The report ranks countries based on their “growth score,” a measure that captures how fast a nation is growing in terms of downloading apps and games relative to the number of users who are in the country.

In this respect, Argentina has shown the most enthusiasm for games than any other country in the world, even though it is not the most populous country, according to the report. Overall, Latin America is dominating games, and Argentina itself jumped from third in growth score in 2019 to No. 1 in 2020.

The Adjust Mobile App Growth Report draws on data from 25,000 apps released on the App and Google Play Stores in 2019 and 2020 combined, across nearly 250 countries and 12 industry verticals to reveal how well the apps have performed. The Growth Score is calculated by dividing the total app installs per month by the number of monthly active users (MAUs) for each vertical and country in the Adjust dataset to reveal the rate of growth from installs relative to the MAU base. The data comes from Adjust’s platform. 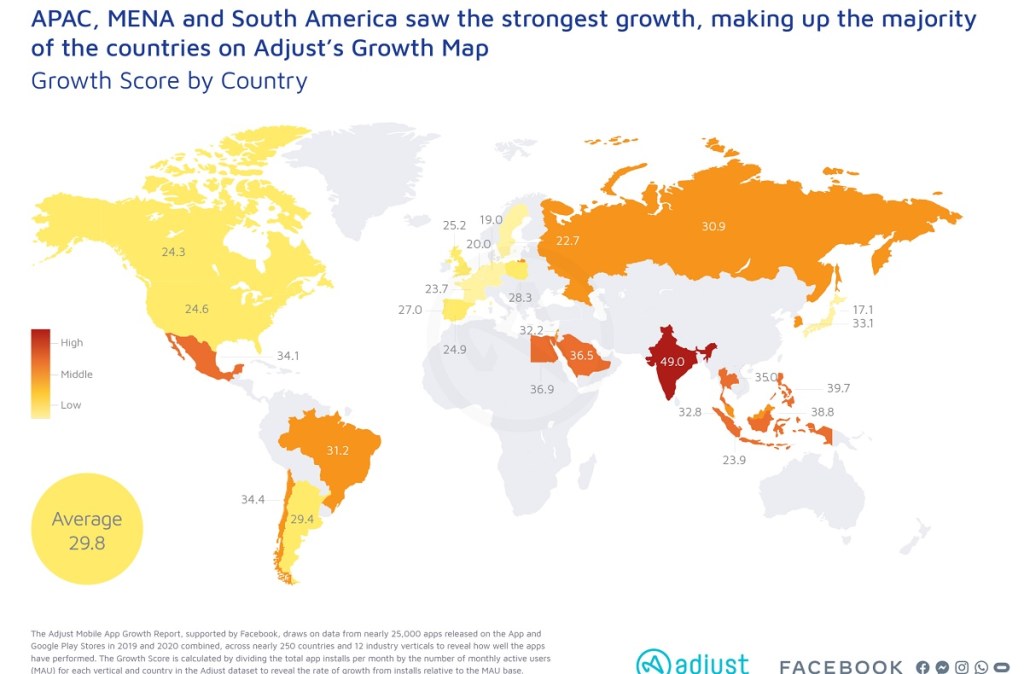 Above: Adjust and Facebook say that apps and games are growing strongly in emerging regions.

The report found that gaming apps continue to win globally, topping the charts as the highest-ranking vertical by Growth Score. This is in no small part due to innovative business models like hypercasual, instantly playable games that are designed to engage with simplistic, satisfying mechanics. Hypercasual games are monetized through ads.

The report also said that China and Vietnam are both incredibly invested in the mobile-first mindset, and China, the world’s most populous country, is also exhibiting impressive growth figures in 2020. Both Vietnam and China are home to apps that are masters of ad monetization, and a high growth score should spell particularly good news for apps that are focused on user acquisition and ad revenue models.

Based on the results, Adjust and Facebook said game and app makers should track where their user bases are growing, as countries can rocket up the charts year-to-year, and it pays to invest where the growth is. 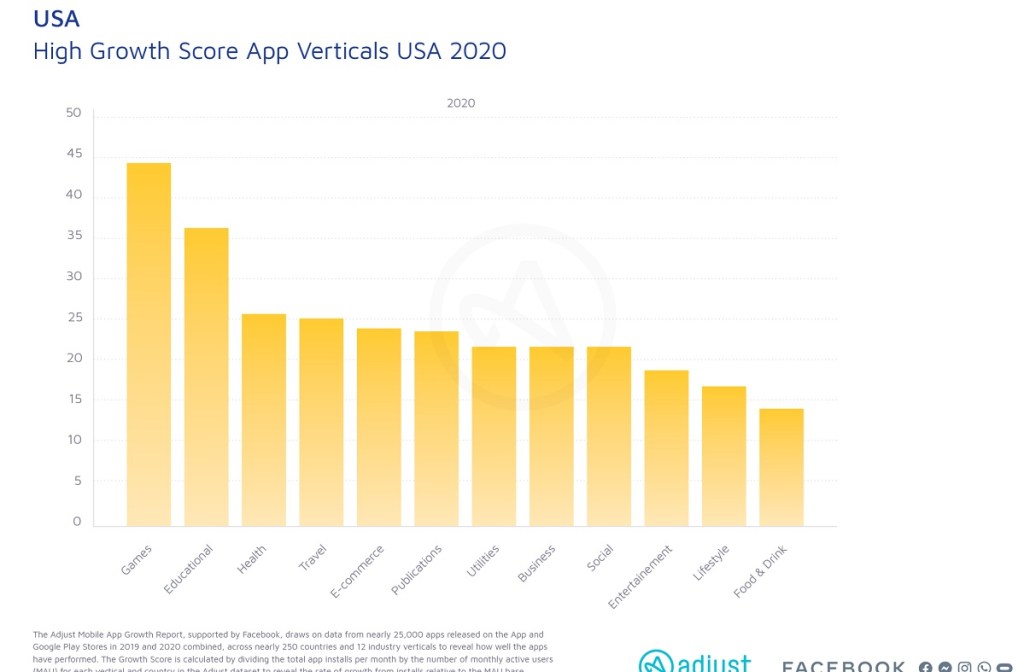 Above: Games lead the way in U.S. growth.

Developed markets in North America and Europe still have huge room for further growth, but the really big numbers are coming from Southeast Asia and South America. Paid advertising saw a huge spike in install numbers when it was restored by many firms after the first wave of the pandemic, suggesting they were potentially missing out on users before then.

Cross-promotion within a wide app portfolio is also a viable strategy for gaming companies, but it can pay companies in other verticals to focus their energies on fulfilling the user experience with fewer apps.

And if you’re making an app in the ecommerce or finance verticals, you have to be in it for the long haul. These apps have an extremely long lifecycle and require constant updates to stay relevant. However, the games are much more short-lived.

“Now more than ever, mobile marketers need a roadmap to identify just the right users, in just the right locales, at just the right points in their journey,” said Andrey Kazakov, the chief operations officer of Adjust, in a statement. “Adjust’s data, coupled with Facebook’s insights into user preferences and actions, enables marketers to target and retain their most highest-value users.”