I hope you all appreciate me. I am a coward. And yet I played Resident Evil: Village so I could do this review. You’re welcome.

Resident Evil: Village can hurt you too if you buy it on May 7 for PlayStation 5, Xbox Series X/S, PlayStation 4, Xbox One, or PC. The PlayStation 5 served as my nightmare box.

In case I haven’t been clear, Resident Evil: Village is scary. Which it should be! But it also accomplishes a good deal more.

Village is a direct sequel to Resident Evil 7: Biohazard, featuring many of the same characters and gameplay mechanics. Once again, this is a first-person survival-horror affair. You’ll be exploring creepy locations like graveyards and mansions while avoiding monsters and trying to conserve your ammo.

I said earlier that I am a coward. And while Resident Evil: Village is scary, tense, and occasionally gory, it’s never too much horror show for me. OK, it came close at one instance in particular Capcom doesn’t want me to talk about. You’ll know it when you get there.

But despite the blood, stalking monsters, and an occasional jump scare, I was OK. Resident Evil: Village paces its horror well. It doesn’t bombard you with disturbing images or horrifying scenarios. Instead, it builds up to each scare, and they all serve a purpose. Even if it something as “cheap” as a zombie (or whatever they’re called this time; I can’t keep track) jumping out at you from around the corner, that can be a signal that you should be on your guard.

I also didn’t mind the scares as much because I was having fun enjoying the game’s technical prowess. Now, I can’t speak to the last-gen versions, but Resident Evil: Village looks fantastic on PlayStation 5. Characters animate in a convincing way, even when that character is a giant vampire woman that’s bending over so she can fit through a normal-sized door. The lighting is wonderful. Dark places feel dark without covering your screen in pure blackness. A lot of the environments, while drab and creepy, are also stunning and realistic, especially those landmark buildings like the giant vampire lady’s castle. 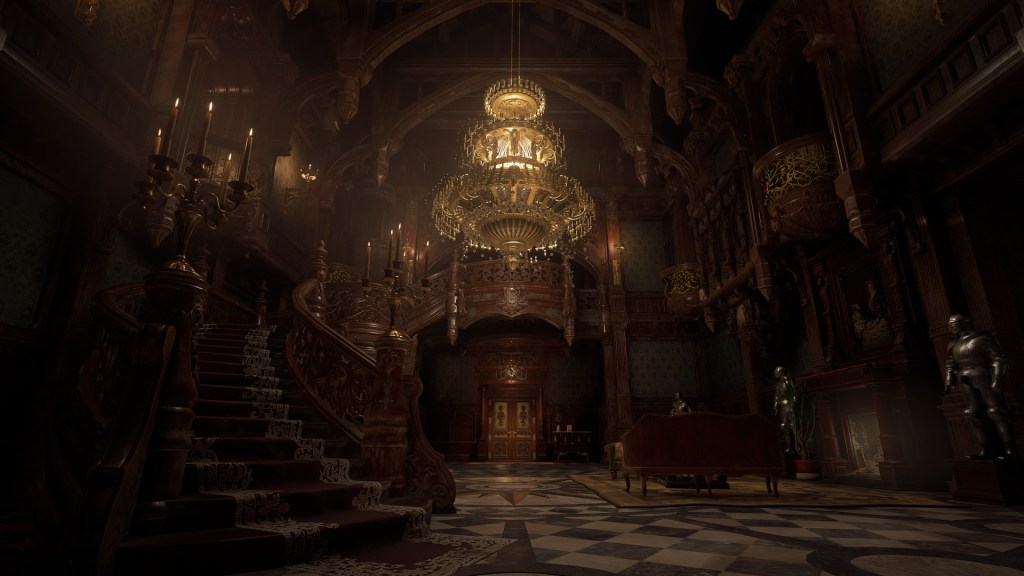 Above: I mean, just look at this place.

Y’all got any more of those giant vampire ladies?

Let’s talk about that big vampire momma some more. Lady Dimitrescu has become something of a breakout star ahead of Village’s release thanks to her, um, size. And she and her castle are wonderful. Exploring its rooms, roofs, and dungeons while searching for keys and fighting the occasional zombie gave me some strong original Resident Evil vibes. You’re also often hunted while in the castle, either by Dimitrescu or her three bug-powered daughters. It forces you to be careful when you’re exploring and consider alternate paths.

But I want you to understand that Dimitrescu’s castle only makes up one part of the game. Really, it’s the first part of the game. I think that’s going to be disappointing for some people. Heck, it was a little disappointing to me! Dimitrescu was the most interesting of all the game’s villains. The castle was the best area. Part of me thinks that this Resident Evil would have been better if it had revolved almost entirely Dimitrescu and her creepy crib.

Resident Evil: Village, however, also takes place in, you know, a village. And from there you access other areas, each with their own supernatural overlord. Nothing is wrong with any of the other villains or their lairs. They just aren’t as memorably Castle Dimitrescu, which can leave you with this feeling that the game peaks a bit early.

Speaking of pacing, the last act of the game is … interesting. I don’t want to talk about anything specifically — partially because Capcom told me not to. But even if Capcom didn’t tell me to avoid spoilers, I’d rather wait for you all to digest the ending yourself. It does some fun stuff with the narrative, but the ending makes some questionable gameplay decisions.

Resident Evil: Village also gets heavy on the action, and this surprises me. Resident Evil 7 took the franchise back to its slower-paced survival-horror roots from the original PlayStation days, and Resident Evil: Village mostly does the same. But it has some shooting-heavy sequences. Don’t misunderstand, it’s not as gun-obsessed as Resident Evil 5. But I would have enjoyed even more of a focus on exploration and puzzle-solving. I could have also used some more elaborate puzzles. They just about all rely on your grabbing a key or something that acts like a key from one room and then bringing it to a locked door in another (often not very far away) room. 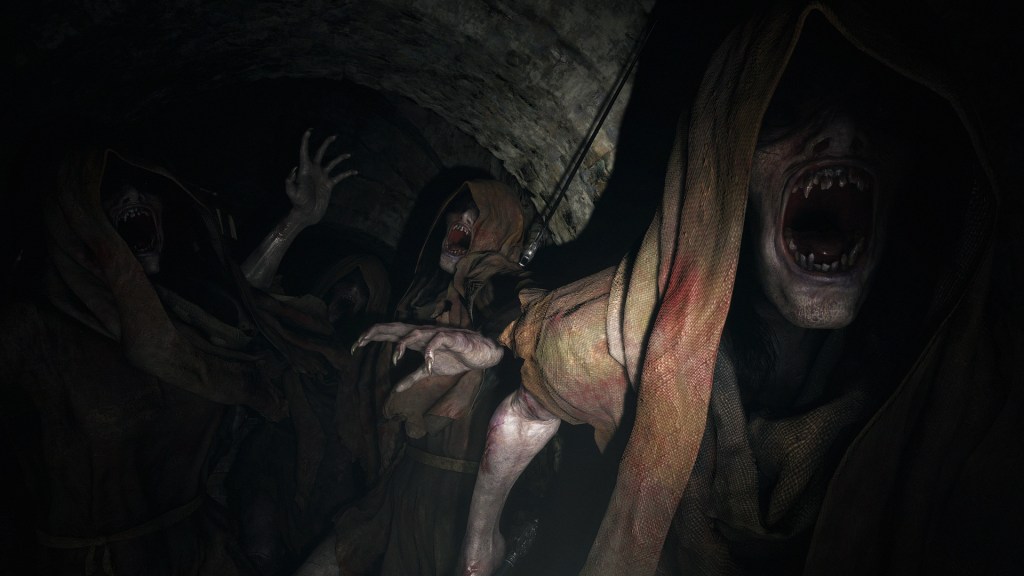 Above: You’ll be shooting plenty of these things.

Actually, Village reminds me a lot of Resident Evil 4. That game also has a creepy European village and castle. Heck, both games even have an eccentric and mysterious shopkeeper. Now, if you think that Resident Evil 4 was a bit too action-focused for your tastes, don’t worry. Village is still closer to Resident Evil 7 on the survival-horror/shooter scale.

Resident Evil 4 is still my favorite entry in the series. So I enjoyed Resident Evil: Village’s similarities. It’s not as well-paced as that masterpiece, but it’s also something of a modern gaming technical marvel. If you own a new console and are looking for a graphical showpiece, Village can be that game for you.

Resident Evil: Village is going to make fans of the franchise happy, especially those who aren’t cowards like me. But even if you also find yourself shying away from horror, I’d encourage you to screw your courage to the sticking place and consider a look at Capcom’s latest survival horror stunner.

Resident Evil: Village comes out on May 7 for PlayStation 5, Xbox Series X/S, PlayStation 4, Xbox One, and PC. Capcom gave me a PS5 code for this review.