The world has a lot more sports-related content than it can fit onto ESPN, Fox Sports, and AM Radio. And Twitch is helping to pick up that slack. The sports category is growing quickly following its debut in July. That includes nearing 11 million hours watched in April, according to data from Rainmaker.gg.

“Twitch has been dabbling in sports since 2017, but in July of last year they introduced TwitchSports with a renewed focus on the scene,” StreamElements founder Doron Nir said. “The Sports category on Twitch has experienced substantial growth over the last 10 months, starting with a little over one million hours watched and now boasting over ten million.” 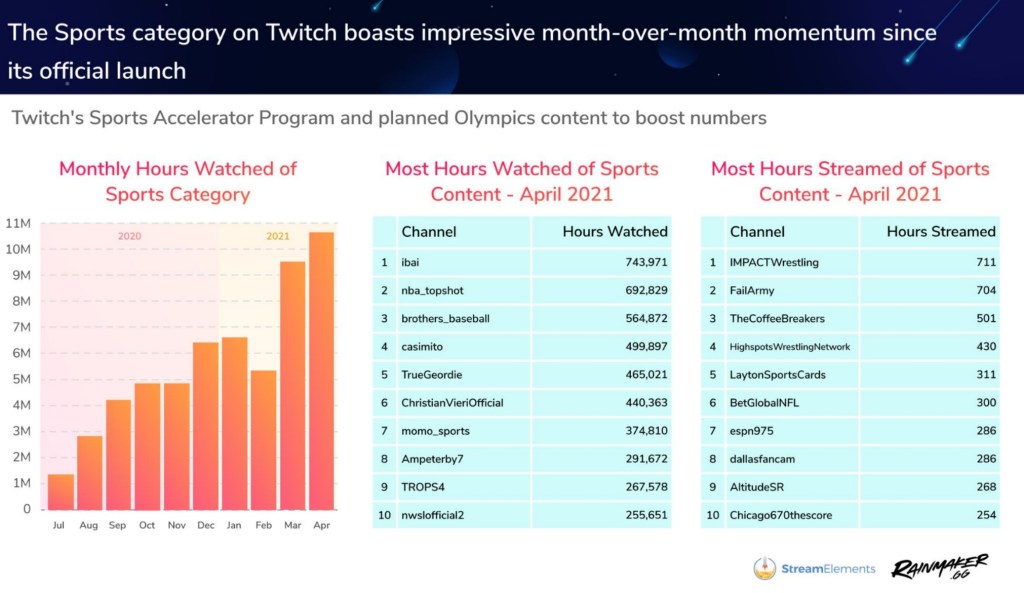 Sports content on Twitch takes many forms. Channels like Mbovosumo attract thousands of English speakers to watch live sumo events from Japan. But a number of other channels broadcast live baseball from China or Italian soccer-talk radio. TwitchSports is also capitalizing on the collectible-card speculation market with box-breaking channels. Box-breaking invites viewers to take part in the live unboxing of trading cards, and this addictive hobby is finding a home on Twitch.

And Twitch has big plans to expand the sports category.

“With the announcement of [Twitch’s] partnership with the Olympics and its new Sports Accelerator Program that will drive more creators into the category with monetary incentives, it’s clear sports are a big part of the platform’s future,” said Nir.

Meanwhile, role-playing and Just Chatting is also growing on Twitch.

“One of the takeaways from Just Chatting and Grand Theft Auto V dominating the top of the charts for months is that being a skilled gamer had no bearing on the popularity of this content,” said Nir. “This reinforces the notion that success on Twitch can be achieved by being a successful entertainer instead of a pro player which should make the medium even more appealing to casual gamers.”