The Summer Game Fest will feature more than a dozen world premieres and dozens of game companies when it debuts on June 10.

Geoff Keighley will kick off the summer of game reveals with an all-digital, free global fan festival with more than 30 publishers, developers, and platforms. The Summer Game Fest should whet the appetite of fans as they prepare for an all-digital Electronic Entertainment Expo (E3) from June 12 to June 15.

This year, many of the companies involved will concentrate their announcements and teases for games in a program that will last a little more than an hour, said Keighley in an interview with GamesBeat.

The fest will include original programming, musical entertainment, publisher livestreams, and the Day of the Devs indie game showcase, which iam8bit and Double Fine Productions curate.

Summer Game Fest will blast off with Kick Off Live!, a world premiere showcase streaming globally on June 10 at 11 a.m. Pacific in a show that Keighley hosts.

Kick Off Live! will include a live performance by Weezer, who will debut a brand new, stream safe game soundtrack song that can be freely streamed on Twitch, YouTube, and anywhere else without being blocked or losing monetization, in an effort to help eliminate the challenges creators often encounter with popular music. 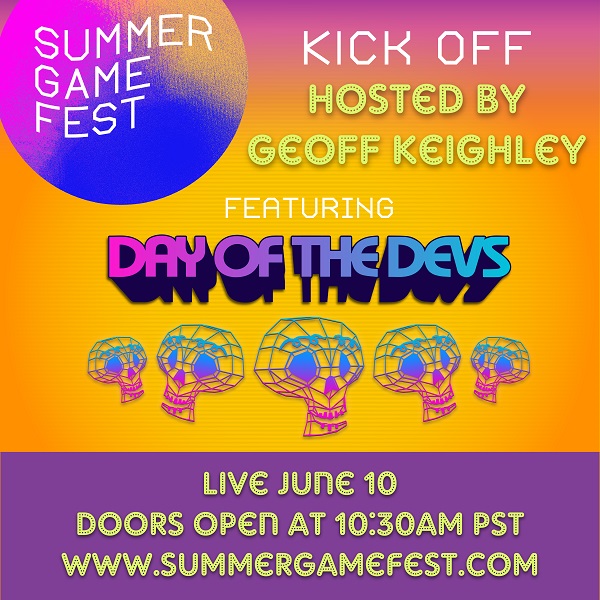 Above: The Day of the Devs will be part of the kick-off event for the Summer Game Fest.

Day of the Devs will take place during the broadcast. Tim Schafer, the founder of Double Fine and cofounder of Day of the Devs, said the team is picking the best games from hundreds of submissions from around the world.

As part of Summer Game Fest, select publishers will directly update fans with free livestreamed events, which will be indexed and available to watch on summergamefest.com. Starting today, fans can visit summergamefest.com for a constantly updated calendar of events as they are announced by publishers.

Keighley said he decided to do the fest again after talking with publishers, some of whom didn’t have enough titles to carry an event of their own.

“This is the best approach with a showcase across all the companies,” Keighley said. “We are trying to condense a lot into one big day.”

Summer Game Fest’s original programming, including Kickoff Live, will be distributed across all major streaming platforms, such as Facebook, Twitch, Twitter, YouTube, and more global outlets. It will also be available for co-streaming by creators around the world. Amazon’s Prime Gaming will serve as a sponsor of Summer Game Fest.

“There will be publisher events that will be coming in the days after that as well,” he said. “It will be a pretty eclectic bunch of stuff across the industry. Some of the most anticipated titles will be in there, and hopefully smaller games as well.”

Not part of E3

Keighley noted that the Summer Game Fest is not affiliated with E3, which is also planning multiple days of gaming events in its first-ever digital broadcast event. E3 was canceled last year because of the pandemic, and it led to what GamesBeat Jeff Grubb calls the “Summer Game Mess” (all the non-E3 events that cropped up last year), which is not to be confused with the Summer Game Fest.

Keighley warned that fans should not get too excited, as it is true that the pandemic has delayed some games and pushed back some announcements of big titles.

Sadly, Nintendo isn’t on the list of game companies attending the Summer Game Fest. But it is going to be at E3. Keighley said the kickoff night won’t be the only Summer Game Fest event, as more announcements may come later.

“Some of the most anticipated titles will be in there,” Keighley said. “We will promote things coming later like Ubisoft’s Forward event. We can bridge the gap.”

He said more details and more partners will be announced over time. Keighley will also host Opening Night Live at Gamescom, the big European digital event coming at the end of August, and he’ll host The Game Awards again in December.