ScavLab, the experimental sandbox testing platform built inside the early access Scavengers game, will get a big test drive in a May 29 event. Thousands of players will be able to join in a single, shared community hub, essentially a big party for early adopters.

The game comes from Midwinter Entertainment, a studio that game technology company Improbable owns. Scavengers is a strategic survival shooter with a new take on battle royale. It is available in early access on Steam and the Epic Games Store.

The ScavLab event take place at 11 a.m. Pacific time on May 29. It follows a closed community test that took place in mid-April and attracted over 1,800 players. This first public ScavLab event will allow thousands of players to participate in a unique gameplay experience within a single, shared communal hub. Players will take part in competitive sports minigames, large-scale combat, as well as attend a live, digital AMA with Midwinter Entertainment’s CEO and cofounder Josh Holmes.

Players can join Scavengers’ ScavLab event by jumping directly into Scavengers and accessing the that mode from the lobby.

The ScavLab event follows the first major patch for Scavengers and final server wipe. Midwinter Entertainment will also be streaming the event from twitch.tv/playscavengers.

A proving ground for Improbable 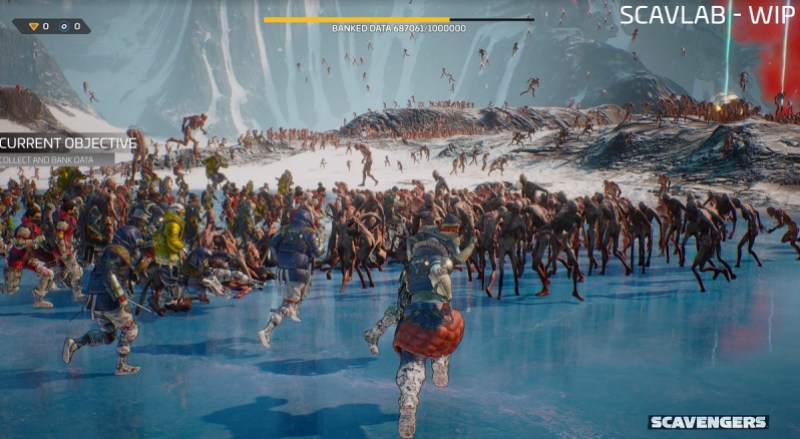 Above: Scavengers can fit a crowd of combatants in an arena.

Right now, Scavengers is Improbable’s best bet at stirring up interest for its technology. Improbable hasn’t had an easy time fulfilling the promise of its SpatialOS operating system for games. Originally, the company pitched Spatial as a distributed OS that could enable vast worlds that were much bigger than those in current massively multiplayer online (MMO) games, with more characters, flora, and pure square mileage of real estate.

That promise of huge game worlds enabled the London-based Improbable to raise $502 million in 2017 from SoftBank and others, and to raise another $50 million from China’s NetEase in 2018. Many people talked about how it might enable the metaverse, the universe of virtual worlds that are all interconnected, like in novels such as Snow Crash and Ready Player One.

The hype around Improbable was huge, particularly after it raised all that money. But early adopters such as Bossa Studios’ Worlds Adrift and Automaton’s Mavericks: Proving Grounds ran into trouble, and the games were canceled. To make sure it could focus on a big success, Improbable acquired developer Midwinter Entertainment in 2019. To shore up its tech, Improbable acquired backend firm Zeuz in early 2020.

Midwinter is aiming to launch Scavengers in 2021. The game will be on the PC and it will also come to the Xbox One and PlayStation 4 as a crossplay experience. The game has been in development for around four years, and the team originally began working with Improbable toward the end of 2017.