Tencent is busy taking applications for its fourth annual Tencent Games Without Borders Awards, which celebrates the best indie games from around the world. The applications opened on March 22, and they close on June 30. This year the entire process takes place online. This is becoming a bigger deal, and it’s a way for the world’s biggest game maker to give back to the game developers who make it successful.

As it has grown, the program has helped draw attention to the games that would otherwise get missed in the sea of noise around the industry. And it helps surface developers who need to break into the Chinese market or break out of a particular region to global success. This year, the program’s prize pool expanded to include things that will help developers finish their games, including hardware, localization, conference attendance, cloud credit, and mentorship, on top of cash prizes and promotion.

After being screened by Tencent and voted upon by a panel of judges, the winners will be announced in October at an event held by both Tencent Cloud and Intel Game DevBoost. Last year, more than 200 teams from 30 countries applied.

How it came about

The awards started in 2018 originally as a contest to find games that were innovative or creative, and it was focused almost exclusively on Chinese domestic developers. Only a handful of international titles took part, said Indigo Zhu, the head of Tencent Independent Game Incubator, in an email to GamesBeat.

“Over the past couple of years, we’ve altered our focus a little, in that while we still want games that do something completely new, it’s no longer a prerequisite for participation — this is now a competition for all indie games, and we’re as keen to see beautiful homages to classic genres as we are games that try to rewrite the gameplay rulebook,” Zhu said. “By expanding the scope of the awards program and having a dedicated International channel, we saw more than 200 international games being submitted for consideration last year.”

The program resides with the Tencent Institute of Games, whose mission is to support knowledge sharing, industry communication and to help cultivate talent throughout the industry. This can take many forms, such as university partnerships, but it can also take the form of something like the awards, Zhu said. 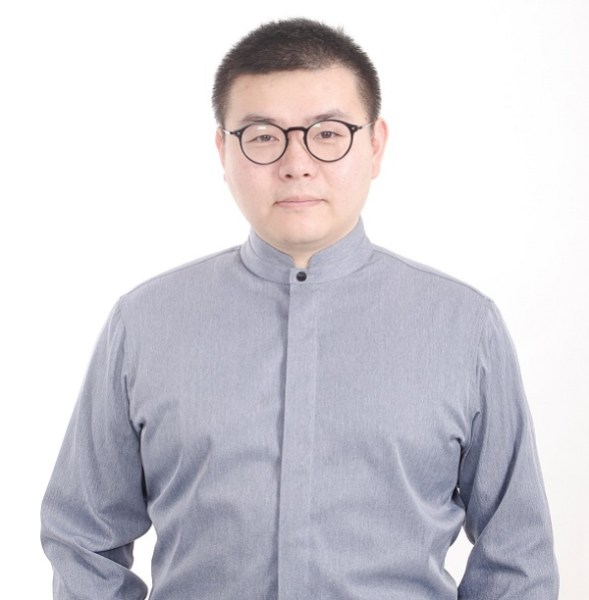 Above: Indigo Zhu, the head of Tencent Independent Game Incubator.

“Running this contest was a way of supporting indie developers globally and identifying standout talent and projects,” Zhu said. “For the international side, it also had a benefit of acting as a form of cultural exchange.”

A cultural exchange is timely because international tensions rose during the administration of ex-President Donald Trump and they haven’t improved much under President Joe Biden.

Zhu said the company plans to focus on the products and teams participating in the competition. In the future, as a part of our community, the participating teams will have the opportunity to participate in various promotional activities. Ultimately, the goal is to promote the diversity of games around the world.

With each year, Zhu said the team has absorbed the feedback and tried to make it better. The prize amount was a big question, and the team opted to create smaller cash prizes as well as hardware and other support. That was deemed better than a large, attention-grabbing cash prize for the prestige.

“In the course of preparing for the 2021 awards, we looked at what many indie developers needed and, for a lot of them, a smaller cash prize, some hardware and some support would be a huge deal,” Zhu said.

This was something that Emilie M. Reed wrote about in a piece on arts funding and Adrian Hon spoke about it and it caught Zhu’s ear. 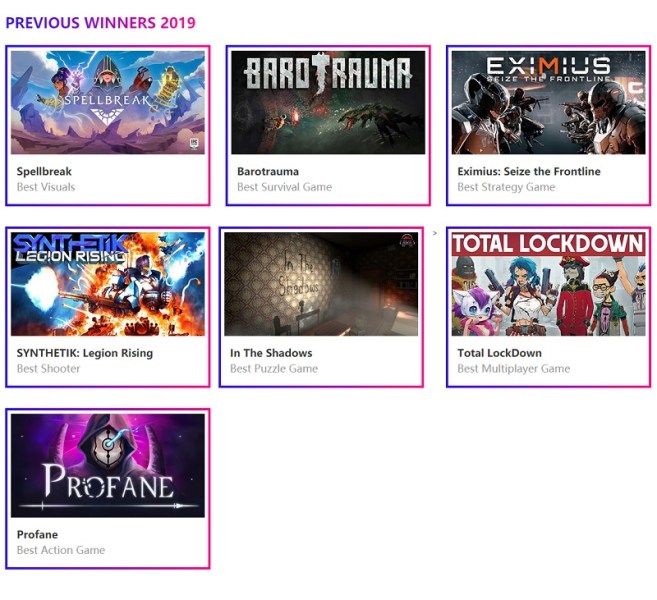 Above: Tencent GWB winners from 2019.

“When looking at prizes we wanted ones that would still be appealing to more established, larger teams, but genuinely make a big difference to the ‘common’ indie,” Zhu said. “And, by splitting the prize fund into multiple smaller pots we can make sure to help as many teams as possible.”

That philosophy extends to all the prizes. Every team gets Intel hardware, for example. With regards the free localization prize, if a game already has a publisher, then it’s likely they already have a simplified Chinese translation. But for a one or two-person team, working on their first game, it’s possible the game only exists in their native language, Zhu said.

“By offering this prize, we can help them reach an entirely new market and, again, the prize will make a genuine difference to the success of a team,” he said.

For larger teams, the opportunity to get their game in front of Chinese players is still appealing, even if they don’t need some of the other prizes. Beyond this, it has to be easy to take part. If devs or publishers have to fill out a million forms or commit days at a time to preparing, they’ll honestly not bother. They already have enough on their plate, Zhu said.

“So, we structured the competition to be completely online from day one, only take an hour or so to sign up, and then there’s no other involvement necessary unless they opt in to a promotional activity or announcement,” Zhu said.

Above: Tencent GWB winners from 2018.

Tencent wants a mix of developers whose games that have an established following, high production values, and broad appeal. It also wants titles that not that many people have seen before.

“The result of this approach is that we’ve seen titles such as Cloudpunk, Haven and Spellbreak, all relatively well-known indie titles, with super-high production values, that found an audience,” Zhu said. “And we can try to mix that in with titles such as Pull Stay, In My Shadow, Super Cable Boy, and Peaks of Yore, all games from less-established devs that might go under the radar for a lot of people. It’s important to us that our awards activity doesn’t just end up signal boosting the same titles that already have the spotlight. We try to share it as equally as we can.”

The other thing Tencent does is to make sure that the awards are truly global. A lot of entrants come from North America and Western Europe. But Tencent also tries to reach teams from India, from Brazil, from Tunisia and so on.

“There’s some really impressive devs there right now, but the teams in these regions don’t always have the same promotional and networking opportunities that a team in California might have, for example,” Zhu said. “One of the things we’re proud of is that we’ve seen a lot of titles (and winners!) come from all across the world.”

The program finds the indie titles mainly through the judges. The staff at different Tencent studios like Timi and WeGame screens out games that don’t meet the rules or criteria, filtering through hundreds of submissions. Then the judges get a crack at a shorter list. And the judges come from both Tencent and external producers from the industry. The judges this year include Callum Underwood, Elle Osilli-Wood, Kim Pallister, Anna Megill, Elaine Gómez, Markus Khulo, Meredith Hall and Josh Tarrant. 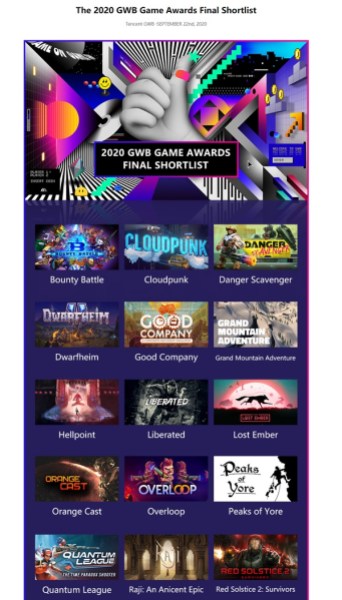 Above: Some of the winners from Tencent’s GWB awards in 2020.

I asked if there were too many games now.

“I’m not sure I would put it as there being ‘too many games’ but it’s certainly true that modern game development and social media has created a signal-to-noise ratio problem,” Zhu said. “It’s easier than ever for developers to start making games thanks to Unity, Unreal, GameMaker Studio 2, Godot, etc., as well as distribution platforms being more open than before. Fundamentally, this is a good thing both for players and creators, but the result is a lot of games struggling for attention.”

Zhu pointed out that others trying to find good indies include IWOCON, Wholesome Direct, and the Guerrilla Collective.

“They all try to lift a handful of titles into the spotlight but the indie game industry is so competitive right now, it’s tough, and it’s also hard to make sure that the people who end up viewing this  content aren’t just other people already in the industry — you want to get the games in front of people who buy and play games,” Zhu said. “They all have their own solutions to this problem. And for us, one part of our solution is to take two games to a Chinese industry event so can guarantee that players can actually get their hands on the titles. Another part is translating interviews and articles about these games for China-side socials. We’ve tried to find multiple ways to tackle these problems.” 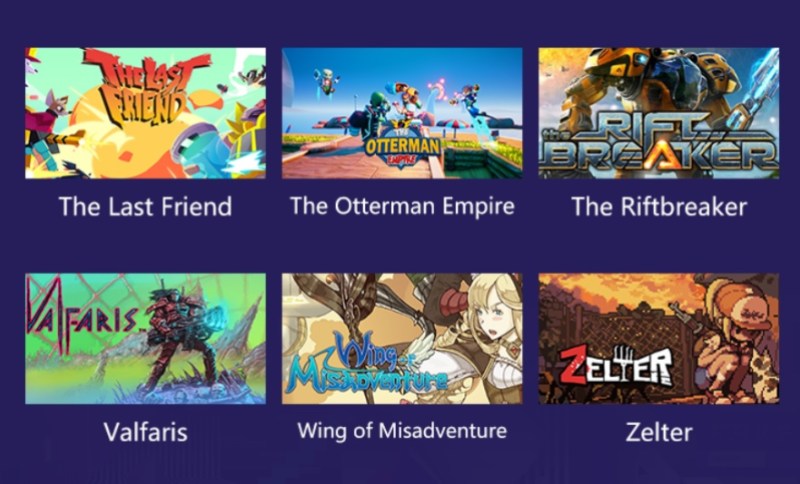 Above: More winners from Tencent GWB awards in 2020.

Last year, Tencent took two international games, Zelter and The Riftbreaker, to the WePlay Expo in Shanghai, as the company felt they would be enjoyable and understandable to a local audience and fit in with the loud environment at those types of events, Zhu said. More applications come in from Chinese mobile game developers, as well as PC game makers.

But the program focuses on good products, regardless of where they’re from. And once the winners are selected, both Tencent and its partners amplify the winners. But that doesn’t always translate into extra sales for a game. Intel GameDev Boost has been particularly helpful in supporting winners, Zhu said.

“Our prizes are designed to increase commercial opportunities,” Zhu said. “Devs are more likely to be able to finish their games due to prize money. Devs will have better resources to test and optimize their games due to receiving Intel hardware. Devs will be able to reach more markets thanks to localization. More players will actually be able to play these games, thanks to the demo booths. And multiplayer teams will have infrastructure support thanks to the support we are receiving from Tencent Cloud and the prize they are offering to developers. All of these prizes make commercial success more likely.”

On top of that, China can be a tricky market to promote in, Zhu said.

“So by translating articles, producing sizzle reels, running interviews in Chinese on our channels here, we’re effectively marketing these games for free and expanding the pool of potential buyers for when a game launches,” Zhu said. “This can fall under the ‘exposure’ category, I know, but it’s a type of exposure that 99% of teams don’t have access to.”

The awards can also be a great way to network and make connections. Winners can find publishing partners after the awards, and Tencent may decide whether it wants to incubate a winning title.

“As part of this, we can draw from the best experts across Tencent’s development teams, and make use of Tencent’s market advantages, operational experience, and networks to help these products reach commercial success,” Zhu said. “That’s another way we can help these teams turn a promotional opportunity into a real commercial benefit.”