About 75% of the pandemic-driven increase in mobile games will persist indefinitely, according to a new report by market researcher IDC and digital ad platform LoopMe.

The study analyzes one of the biggest questions about pandemic gaming: whether players who picked up the gaming habit during lockdown will continue playing games once they can go outside more and resume other social activities.

Based on a survey of thousands of smartphone users, 63% of respondents said they played more games. According to users’ answers followup questions, the researchers estimated that 75% of the net gain in mobile gaming activity will remain even after the pandemic is over, said IDC analyst Lewis Ward in an interview with GamesBeat.

“We asked them, how do they think their habits will change once the pandemic has subsided?” Ward said. “And with other questions, we got to about a quarter of their respondents indicated they would reduce how much time they spent playing mobile games.” 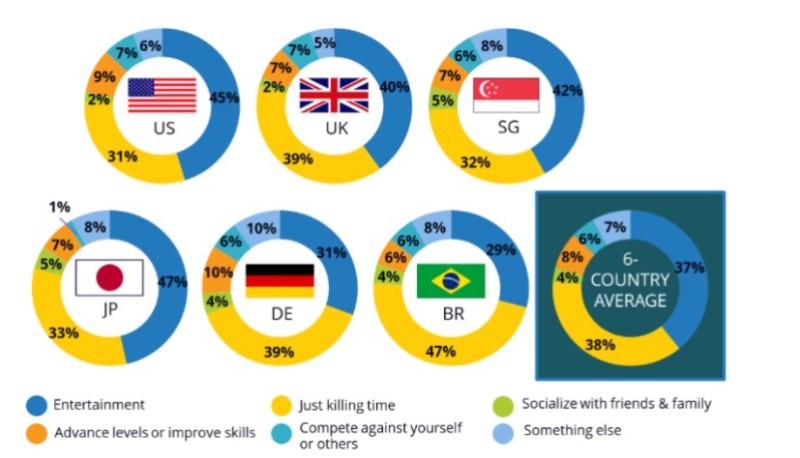 Above: Reasons why people played during the pandemic.

The language-localized survey interviewed 3,850 smartphone users in the U.S., United Kingdom, Japan, Germany, Brazil, and Singapore in April. These countries were selected, in part, to get a mix of countries impacted by the pandemic. Data were normalized to account for population and gender splits by country.

“During the pandemic, there was this big spike,” Ward said. “We’ve seen it in mobile as well as console and PC games. It was across the board. We wanted to find out what the new normal would look like after the pandemic is in the rear-view mirror.”

IDC partnered with LoopMe to field and analyze a survey of mobile gamers in six countries, asking respondents about their existing gaming activities as well as their intentions regarding future gameplay time commitments after the pandemic is largely under control in their native countries. Ward estimated that the pandemic will lift in the next 12-to-24 months.

The survey found a correlation between increased mobile gameplay time commitments and local pandemic effects (specifically, the per capita COVID-19 death rate). About 3-in-4 gamers reported playing to be entertained or just to pass the time; 4% said they were playing to engage in “safe” virtual social interactions that are supported by live multiplayer games especially; more broadly, it appears live multiplayer mobile games outperformed other game types in 2020.

About 6% of today’s mobile gamer community didn’t play prior to the pandemic; these new gamers appeared to skew male and a few years younger than the broader base of prepandemic mobile gamers.

After the pandemic is largely over (presumably late 2022 in most countries), the survey suggests that 25% of the net increase in mobile gaming activity induced by the pandemic will dissipate, but 75% of the net rise will remain indefinitely; this “new normal” will vary substantively by country, however, partly based on the severity of the local pandemic, Ward said.

Largely due to pandemic effects, the worldwide base of gamers that played on a smartphone or slate tablet monthly jumped 12% in 2020 compared to 2019, to roughly 2.25 billion last year, IDC and LoopMe said.

The report also said a majority of mobile gamers make critical buying decisions for their households.