During Summer Game Fest, Norsfell announced that its co-op survival-RPG Tribes of Midgard would launch July 27 on PlayStation consoles and Steam. These Vikings also wanted to show how the Jötnar pose a threat to your village during the Gearbox E3 Showcase.

Gearbox may be part of Embracer Group now, but it still has a publishing label, and Tribes of Midgard remains part of this effort. Other Gearbox Publishing games include Godfall, Homeworld 3, and Trover Saves the Universe.

Tribes of Midgard may seem like “Valheim: The isometric action-RPG,” but in an interview with Norsfell  cofounder and CEO Julian Maroda, I learned that it could be far deeper.

Norsfell is giving players an option to play their Einherjar either by themselves or up to 10 others in Saga mode (which is more story-driven) or Survival mode, which is an endless experience that scales to the number of people in your group. While talking with Maroda, I learned that if you start with, say, four players, then only two of you play in the next session, the world scales down. And if the next time you play with three people, it scales up, but not to where it was when you started out with four people. Tribes of Midgard does this by adjusting about 20 parameters. Playing solo, the map and amount of resources is going to be smaller.

“As you have people joining or leaving the game, we then auto-scale the difficulty so that it always feels like … an adequate level of challenge. And that’s how we strike the balance in between playing solo or playing with your friends,” Maroda said. 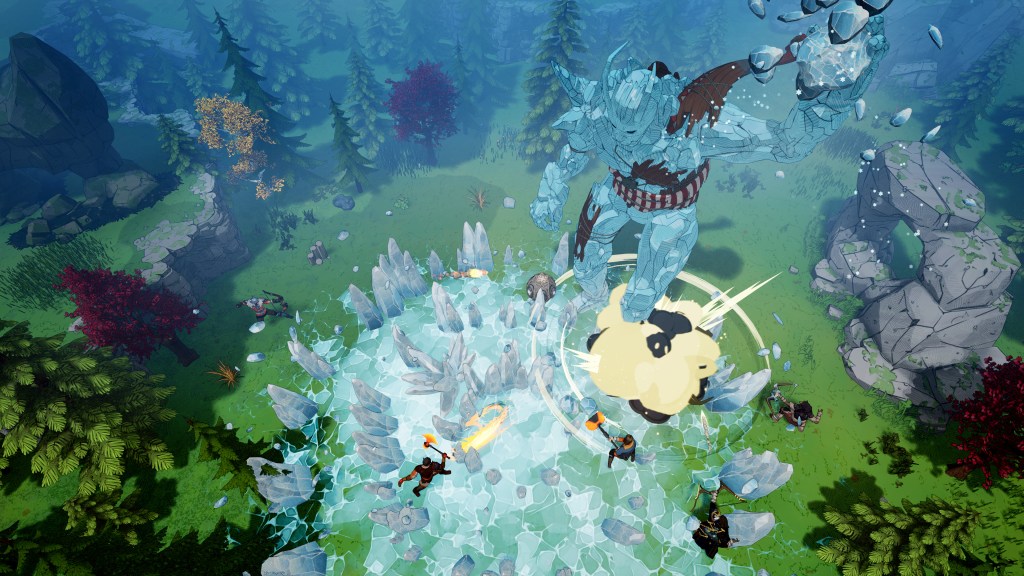 Above: You’ll want to kill these giants before they get to your village.

You are an Einherjar, a hero of Valhalla. You start out with a village, where you’re protecting the Seeds of the World Tree, Yggdrasil, as you hold off  Ragnarök. Tribes of Migard’s story focuses on finding resources, bringing them back to the village, and protecting them from harm. Unlike other survival games, you won’t find yourself scrambling for shelter as soon as you begin. In Saga mode, Maroda said it has a story so that you have something to finish. For those who want that endless loop of gathering-building-fighting, you can play Survival mode.

The village also has several NPCs who help you. You can upgrade with materials you find beyond your village, and they’ll offer new crafting recipes. They also defend the village, too.

And this is another difference Tribes of Midgard has with the likes of Valheim. Every night, waves of Helthings that follow the wicked Hel attack your village, and you and your friends (and villagers) must fight them off. Part of the crafting loop here is about building up your defenses to face these nightly raids.

You also must watch out for the Jötnar, giants that ravage the world and come to smash your village. Maroda said you’ll want to leave the safety of your base and go out to find the Jötnar. Fighting these giants will result in a “tough one” when it comes to fending them off at your village, he said.

Another difference is the world and your character’s abilities. In games like Valheim, I’ll frequently build little bases that I’ll use as pitstops to heal or wait out night and storms. You can’t build such little outposts in Tribes of Midgard. But you can make items that heal, or have powers that regenerate your health. Maroda said you’ll also find locations that help you heal.

Valheim is one of my favorite games of the first half of 2021, but I’ve stopped playing, as I’m having trouble making bigger and better bases. Tribes of Midgard offers a different appeal — a more melding of action-RPG and RTS than Valheim’s survival gameplay. And I’m curious to see how it plays out when it launches next month.

Correction, 4:34 p.m. There is only one Seed — you collect resources.