Mobile gaming downloads and spending grew in the first quarter. That’s because gaming habits formed in the pandemic continued to be strong, according to a report by mobile data and analytics firm App Annie and market researcher IDC.

The Gaming Spotlight report said consumers spent $1.7 billion per week in mobile in Q1, up 40% from pre-pandemic levels, while mobile game downloads grew 30% in Q1. Players downloaded more than a billion games per week in Q1 on iOS and Google Play.

The numbers cemented what we all know about mobile games. They’re the biggest category in gaming now. The report said spending on mobile is set to extend its lead to more than 2.9 times over desktop gaming and 3.1 times more than home game consoles. One year into the pandemic, demand for mobile gaming continues to increase.

“Every trend that we see in terms of how the market is playing out, gaming continues to be the tip of the spear on mobile,” said App Annie CEO Ted Krantz in an interview with GamesBeat. “There are opportunities in in-app purchases and lifetime value that will add more strength to the hardcore. But hypercasual and casual are playing a pivotal role in advertising, especially post IDFA,” making a reference to Apple’s push with iOS 14.5 to emphasize user privacy over targeted advertising. 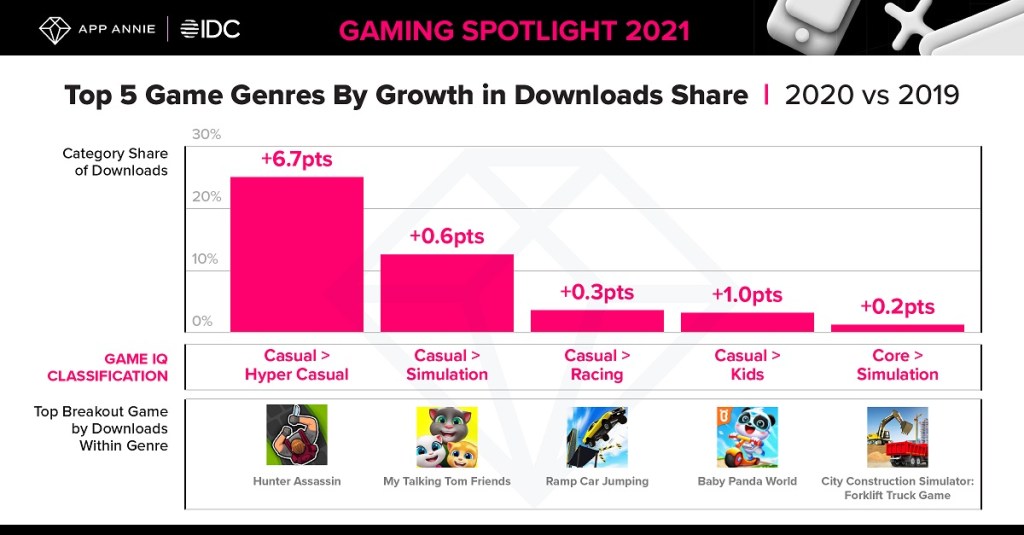 The Americas and Europe saw the biggest growth in market share for global consumer spending. The U.S. and Germany led the growth in North America and Western Europe, respectively, from Q1 2020 to Q1 2021. Asia Pacific still makes up around half of mobile gaming spend in Q1 2021.

The report also said that publishers are embracing cross-platform features.

The top-grossing games including Lineage M, Lords Mobile, Roblox, and PUBG Mobile. These are cross-platform experiences that translated to long-term engagement and monetization potential. Crossplay features reign supreme, as games featuring the capability to access multiple platforms have gained in popularity.

Genshin Impact became a global blockbuster on mobile, PC and console as a result of a well-executed multiplatform rollout.

Meanwhile, game streaming increased engagement and monetization. Apps such as Discord and Twitch saw elevated per user engagement well into April, as game streaming habits ingrained one year into the pandemic.

“The audience is increasing. More people are coming on to gaming,” he said. 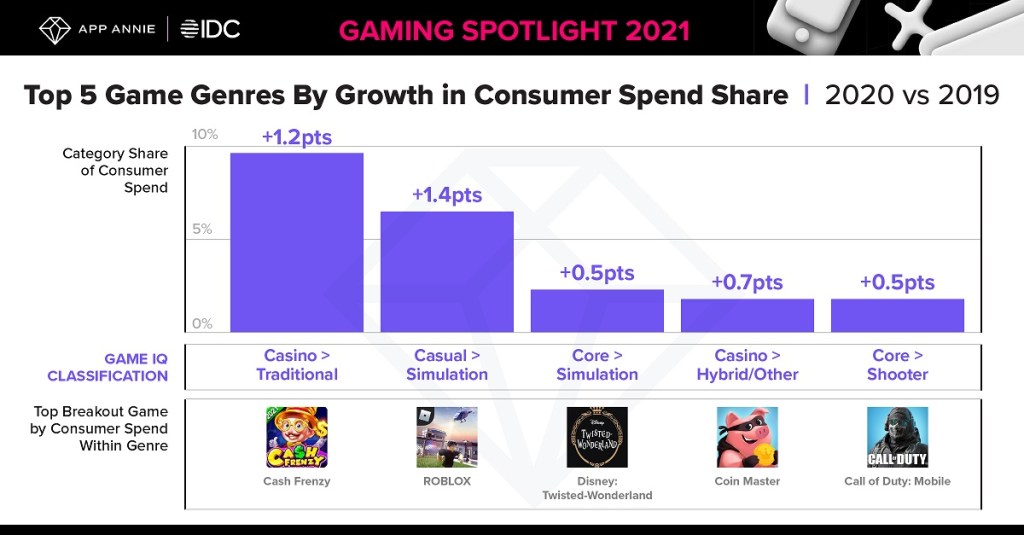 Costs per install, or CPI, are an indicator of game advertising costs. Those CPIs are harder to optimize. Many game companies shifted budgets to Android, driving up CPIs on that platform as they fled from Apple due to the IDFA changes. But that “land grab” didn’t last long and CPIs are under pressure and are falling, Krantz said.

“Our troubles with CPI are here for the foreseeable future,” he said. “IDFA has absolutely played a role in that. But I think the upside for gaming is new audiences, new ways to target.”

Meanwhile, mobile gamers have shown a bit more tolerance for watching advertising on the casual game side, Krantz said. Reward-based ads, where players can get something in a game if they watch ads, are growing.

The big questions on growth 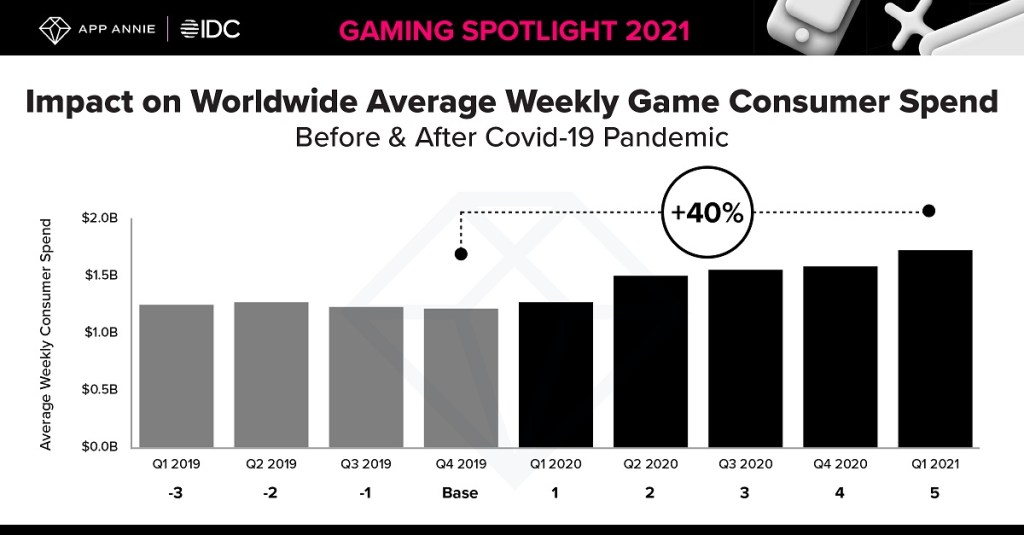 Above: App Annie/IDC says consumer spending has continued to grow for mobile games.

The real test will be in the second quarter, as that was when the lockdown was in full force and people turned to gaming because they had nothing else to do. It will be hard to beat numbers from a year as a result, especially as things are opening up now and providing more competition for games. App Annie’s prediction that mobile games will grow revenue 20% in 2021 is still holding up, Krantz said. The bearish people in the game industry are concerned that mobile games and other sectors will stop growing once lockdown restrictions are gone and the world can engage in other kinds of entertainment and sports again.

“When we move to post-COVID, when we’re really moving around, that could slow things down a little bit,” Krantz said. “But nothing suggests that in the data so far. We actually see gaming probably taking an opportunity to be much more directly competitive with entertainment. You can see where Netflix is going, as it is going into gaming. There’s also a big platform play for gaming.”

Game companies have been acquiring adtech and mobile marketing firms so that they can be more efficient in acquiring mobile gamers through advertising.

“We see this super-heavyweight fight between the ad networks and the big gaming platforms,” he said. 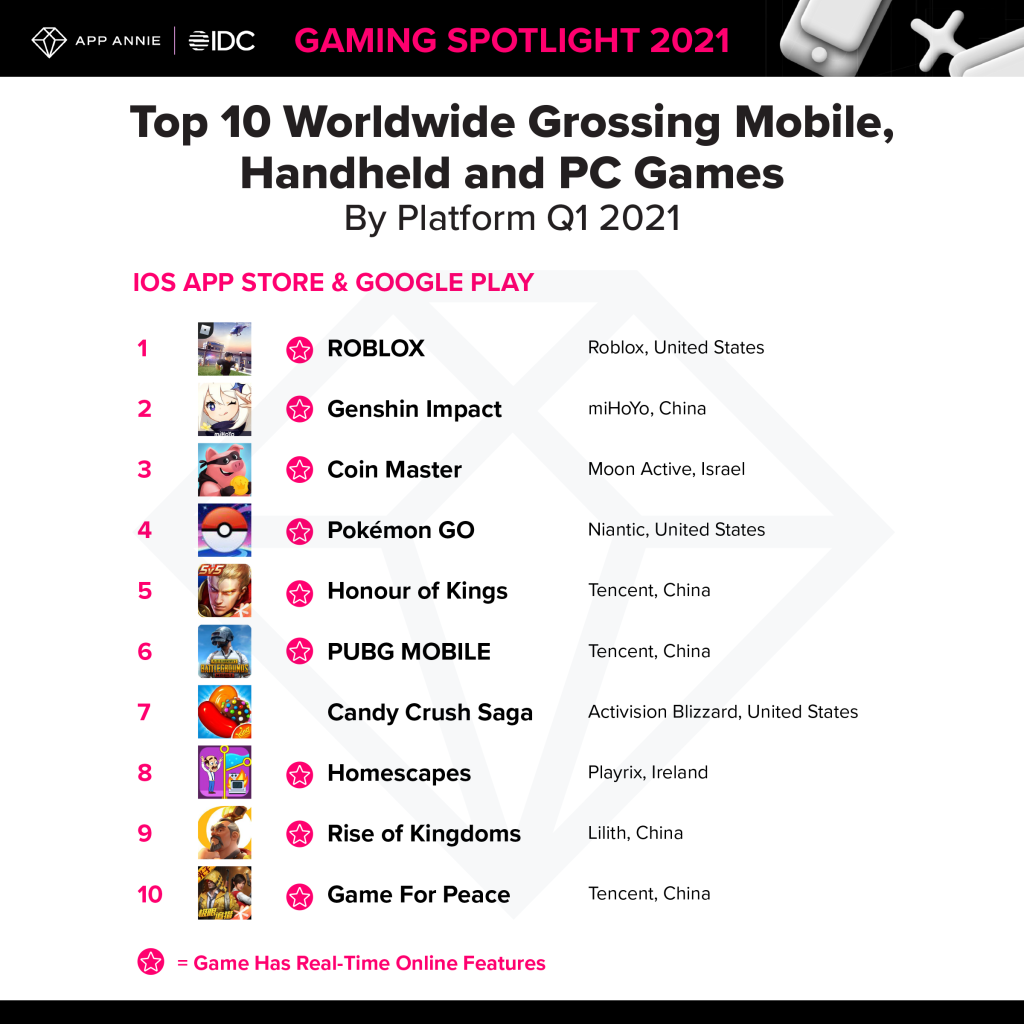 Call of Duty: Mobile has more than 500 million downloads, and I asked Krantz whether that might have boosted both Call of Duty: Warzone, a free-to-play battle royale mode as well as Call of Duty: Black Ops — Cold War. The question is whether Call of Duty: Mobile is the main destination for gamers and for monetization, or if it is the stepping stone to boost gamers to Warzone or Cold War, where they can spend more money.

“I think that’s pretty fascinating,” Krantz said. “I think it’s still too early to tell. But I think that your potential thesis there could hold up because there are so many new users coming into the game and some of them could move to the core immersive experience. There is more friction because of that casual versus core difference that is harder to solve completely on mobile.”

Meanwhile, Krantz thinks the rollout of 5G services and smartphones, which could move data 10 times to 100 times faster, could result in the growth of higher-quality games on mobile.

“I think there is something to that,” he said. “It’s real.

As for things like crypto-wallets on smartphones, Krantz believes we’ll see some momentum in Asia Pacific. He also thinks it’s too early to see what the impact of nonfungible tokens (NFTs) will have on mobile games.

“Conceptually, there is an opportunity there,” he said.