Today’s PC architecture is tasked with processing chores that once demanded high-end workstations, such as generating photorealistic graphics or running real-time inferencing. Rather than turn to expensive systems, developers and gamers would prefer to elevate the power of a PC’s compute architecture to push the boundaries of their creativity, productivity and gaming performance.

Getting more out of existing compute architecture is essential. But how do you accelerate compute-intensive tasks such as neural networks or machine learning, which drive upscaling images, pose recognition, and neural style transfer graphics breakthroughs? The answer is utilizing Intel Deep Link technology, which provides additional computational power  CPUs and GPUs (both integrated and discrete) to run AI-powered applications at blazing speeds and without compromising the user experience. 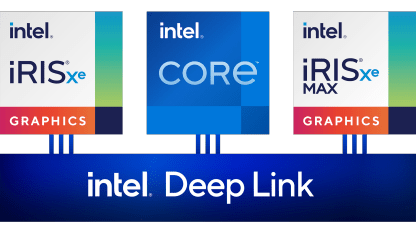 Above: Intel Deep Link combines an 11th Generation processor with an Intel Iris Xe integrated GPU and an Intel Iris Xe MAX discrete GPU, and manages the use of multiple GPUs simultaneously.

Until recently, gamers were forced to take calculated risks such as overclocking CPUs to attain higher utilization of existing compute. Some developers tried complicated partitioning schemes to maximize available compute resources. But there were several problems with that:

By running Intel Deep Link technology, developers now have the ability to strategically apply computing power that was previously unavailable, assigning tasks to parts of the computer that were otherwise dormant—and to do it efficiently. Deep Link enhances the way CPUs and GPUs interact, harnessing both integrated and discrete GPU capabilities — boosting the performance potential of AI-based applications. The Intel Iris Xe (also referred to as the integrated, or iGPU) and Intel Iris Xe MAX (also referred to as the discrete, or dGPU) can equally split tasks, completing a workload in roughly half the time.

Combining Deep Link technology, along with the Intel Distribution of OpenVINO Toolkit, enables the assignment of workloads across processors, helping to drive significant developer productivity gains and performance improvement in AI-based applications requiring upscaling enhancement, video streaming & capture, or video rendering. OpenVINO prevents the overloading and bottle-necking that plagues many applications by simplifying the assignment of workloads across the entire computational platform. The applications not only perform much better, they’re easier to create — and the code can be deployed anywhere in device-specific iterations across CPUs, iGPUs, dGPUs, Vision Processing Units and FPGAs.

Let’s look at several examples of how this potent technology framework raises the bar for what’s possible for PC application developers, gamers and those who demand exceptional performance out of mobile processors.

Scanning old family photos can help beloved images achieve an eternal, digital life. But it doesn’t always improve their appearance. Developers have long been frustrated by the challenge of upscaling images to enhance their appeal. And consumers would prefer to see these digital image transformations happen instantaneously if possible.

Harnessing the power of Deep Link and OpenVINO, new AI-based algorithms are able to enhance these images in ways never before possible on PCs. Code becomes multi-GPU-aware; the end result is the upscaling experience is snappier and sharper than it was without Deep Link. End users enjoy a faster runtime experience enabling them to work through an entire album of vintage photos much faster than ever before.

For example, Topaz Labs, a software company known for applying machine learning to editing photographs, released an image upscaling platform called AI GigaPixel, which improves resolution and sharpens small, grainy or out-of-focus images so they can be displayed and printed in large sizes with far less distortion. By applying machine learning to image upscaling, the software optimizes each pixel to create an ideal image. And it works. “Topaz Labs have integrated Intel’s Deep Link Technology into our Gigapixel AI* application, upscaling images up to 6X with AI adding detail and clarity,” says Albert Yang, CTO, Topaz Labs.

In a yoga class, you expect your instructor to not only watch your poses but also to help you improve them if necessary. But what if, rather than enter a Yoga studio, you prefer to live stream a class into your family room — what type of pose guidance is possible then? An instructor needs help to assess every online student’s poses. And that’s exactly what an Xe Max-enabled laptop can do on the fly utilizing both inferencing and image recognition. The instructor will let you know if you’re not holding your back leg straight when you attempt a Crescent Lunge or many other poses. Above: MixPose uses Intel Deep Link and OpenVINO to capture the position of students, enabling the instructor to guide them into improving their form.

Until now, doing all of that advanced processing on a PC notebook, particularly over Wi-Fi and the internet, would have been nearly impossible. Peter Ma, co-founder/CEO of MixPose, created an interactive application for live yoga instruction at home that applies inferencing to assess a Yoga class students’ poses. The MixPose application also utilizes Deep Link, the OpenVINO toolkit and the x264 codec that can be hardware encoded via the Intel Iris Xe MAX GPU. While the discrete GPU manages the pose estimation inference, the CPU tackles encoding. Deep Link-enabled power sharing between the CPU and GPUs make the immersive MixPose experience possible.

“OpenVINO allows us to use the GPU to process pose detection and perform video encoding, reserving the CPU purely for the operating system,” says Ma, who developed it. He wanted the inferencing solution to work even when there’s poor Wi-Fi.

Ma also enabled the solution to run on light laptops which can perform inferencing without relying upon the Cloud — which is also expensive to set up and maintain. This type of capability could be used for a wide range of remote assessments, not only in sports, but also across a spectrum of other training activities.

Gamers seek ever more immersive and fun experiences and the introduction of neural style transfer unlocks a new realm of possibilities for the gaming community. The idea is to take an existing image, either static or moving, and morph it into another style altogether. It’s a stylistic mashup, a CPU-intensive process that can transform a Picasso into a Monet or a scene from a photo-realistic urban video game into one occurring on another planet in a distant galaxy.

Yet, game developers know that executing this transformation is not a trivial problem — it must happen on every frame at 30fps — and you can’t have that process slow down game play by tying up the CPU. And for that matter, gamers don’t want to see their GPU do anything other than focus on the gaming experience. All of which makes power sharing that much more critical to pushing the graphics envelope.

Real-time style transfer technology relies on resource-intensive inferencing processes which suit Deep Link’s ability to enable developers to offload sections of the game to different compute units. With Deep Link you can run this process on an integrated GPU while gaming utilizes the discrete GPU.

Of course, there are other means of substituting backgrounds with images, overlays, or avatars to protect a gamer’s privacy or personalize a gaming experience. For example, XSplit VCam from Split Media Labs Which utilizes Deep Link and is accelerated by Intel Deep Learning Boost, can put gamers in a game or provide a desired foreground and background blur. XSplit VCam uses iGPUs and multicore CPUs to accomplish this without impacting the performance of games running on discrete GPUs. “The ability to load balance across the two compute engines brings tremendous performance improvements to our products, which translates directly to improved user experiences,” says Henrik Levring, CEO, XSplit, SplitmediaLabs.

AI is transforming graphics-intensive application development and pushing the boundaries of what you can do with gaming. But developers may fear that they may either lack the necessary development resources or that such development requires enormous processing overhead.

Together, Intel’s Deep Link Technology and OpenVINO provide the tools that help developers to design faster, smarter, more efficient AI-based applications, and to build a customized compute platform that takes advantage of hardware processing space that was previously unavailable. This dynamic power-sharing approach offers significant gains in both performance and efficiency of compute-intensive AI applications, upleveling the processing capabilities of PC notebooks both for developers and gamers who demand world-class compute experiences.